Toilet Turns Classroom For These Students In A Madhya Pradesh School 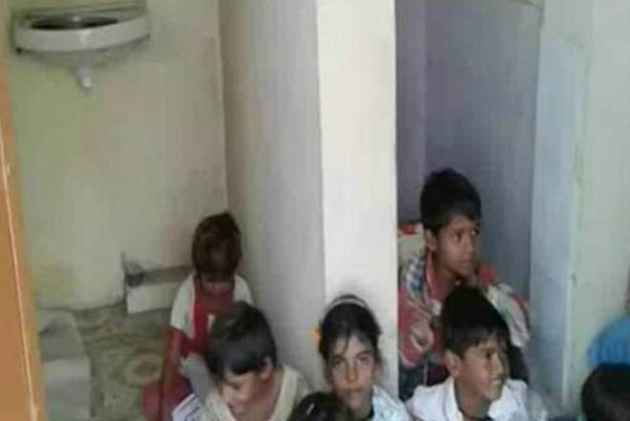 A disused toilet became the classroom for students in a primary school in Madhya Pradesh's Neemuch district as there's no school building.

The school, if you can call that, has just one teacher and is 35 km away from Neemuch headquarters. Till 2013, the school functioned out of a rented room.

School teacher Kailash Chandra said he has been forced to take classes in the toilet because there is no school building.

It was also revealed that at times, when it rains, the same toilet was being used to give shelter to goats as well.

Education Minister of Madhya Pradesh, Vijay Shah on Thursday said that there are almost 1.25 lakh schools in the state and because of limited resources it is becoming impossible to construct other school buildings, adding rented places are being allotted to carry on with the classes.

"In the case that has come up, no building has been constructed as yet. We have talked to the collector and the department. We have almost 1.25 lakh schools and in limited resources it is not possible to build schools. But we are making sure that there is no problem in finding a rented space" Shah told ANI.

He added that though heavy rains took its toll on the school, the classes shouldn't have been taken in the toilet.

"For that we have even called for an investigation report. We are asking of a report of wherever the problems of building prevail. Till the building is not made, they can go to a rented building and the State Government will bear the expenses," he said.

“The study conducted by Child Rights and You (CRY) in 190 schools, including 141 primary and 42 secondary schools with 14, 983 students that include 7,153 boys and 7,786 girls, has found that there are “significant infrastructural gaps” in compliance of the Right to Education Act, 2009, even six years after the act was implemented.

More than 8% of schools have no toilets while in the remaining 49% of schools, toilets are unused, the study has found.