PM Modi described the victory as a result of the opposition's "arrogance" as he hit back at Rahul Gandhi over "childish" behaviour. 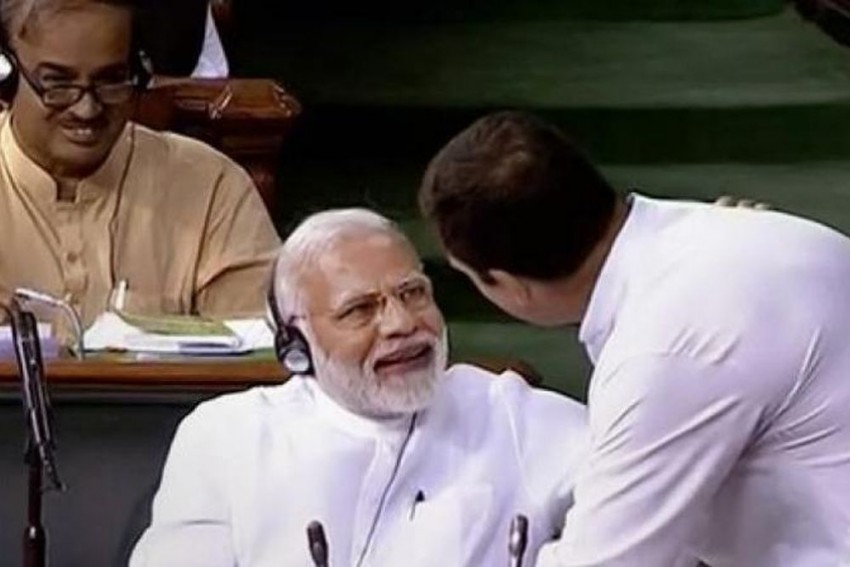 Prime Minister Narendra Modi-led NDA government on Friday night comfortably defeated the no-confidence motion against it in the Lok Sabha.

PM Modi described the victory as a result of the opposition's "arrogance" and its 'Modi hatao' mindset as he hit back at Rahul Gandhi over "childish" behaviour.

The government got the support of 325 members, while 126 backed the motion with 451 MPs present in the House.

Members of the Shiv Sena, BJD and TRS were not present in the House when the voting took place. Several AIADMK members opposed the motion, in a boost to the NDA.

Replying to an over 10-hour debate on the motion, Modi appealed to all parties to defeat it and accused the Congress president of "crushing" the truth and "playing with national security" by making allegations against him on the Doklam issue and by speaking of graft in the Rafale aircraft deal.

Hours after Gandhi left everyone surprised by walking across to the Prime Minister's chair to hug him, Modi sought to turn the tables on him, saying he appeared to be in a hurry to occupy his seat as he kept asking him to stand up for an embrace.

"What is his hurry to come to power? Let me tell this member, it is the people who elected us. That is how we have come here," he said.

The whole country has watched the game he played with his eyes, Modi said, evoking laughter from treasury benches as he gestured with his hands, apparently referring to Gandhi's wink in the House following his speech.

If Gandhi kept Modi in his line of fire through his speech, it was the turn of the Congress' ruling family when the prime minister spoke.

"The country is not unaware of the history of one family which stoked political instability in the country time and again for its selfish intersts," he said.

Modi said his fate was in the hands of 125 crore people and added that he prayed to lord Shiva, who was invoked by Gandhi in his speech, and the countrymen, that the Congress leader bring a similar no-confidence motion in 2024.

He cited several development and welfare initiatives while hitting out at the opposition, saying the country has seen how much negativity has seeped into his rivals that they were speaking against the progress made by the country.

To remove him, these parties, which could not even stand each other, have got together but he had the people's blessings, Modi said as he recited verses and shlokas to describe the opposition as a decrepit ship without a captain.

This is not his government's floor test but a "force test" that the Congress has done to see which parties are with it, he said.

Without naming Gandhi, Modi said due to his "careless" allegation on the Rafale deal, both India and France had to release statements. There is complete transparency in the deal, he asserted.

Gandhi also spoke about the Doklam issue but believed the Chinese Ambassador over our forces, Modi said referring to Gandhi's meeting with Chinese diplomats during the standoff.

"What have we come to? Everything does not merit a childish conduct," he said.

Apparently referring to the opposition attack on his government over mob lynching incidents, Modi said he has asked state governments to take action against the culprits who indulge in violence.