The bus to peace in Jammu and Kashmir (J&K) may be headed to that alternate destination its passengers know so well: a place called impasse. 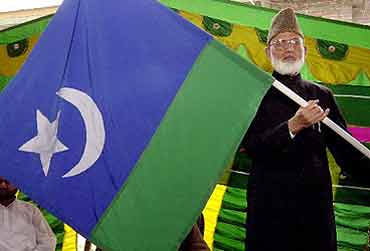 The bus to peace in Jammu and Kashmir (J&K) may be headed to that alternate destination its passengers know so well: a place called 'impasse'.

Last month, Pakistan helped restore Islamist leader Syed Ali Shah Geelani to the centre-stage in J&K politics, giving both Islamabad and the jihadi groups it backs a voice in Srinagar. Now, Islamabad seems to be considering what message it wishes to deliver from its newly-acquired pulpit. In New Delhi for talks with his Indian counterpart, Pakistan's Foreign Minister, Khurshid Mahmud Kasuri, summoned the rival secessionist leaders from J&K for a parallel stream of negotiations. Nothing is known of what transpired between Geelani and Kasuri at the two meetings they held on September 5, 2004. Geelani's centrist rival, Mirwaiz Umar Farooq, told journalists he emphasised the need for softer borders and re-uniting divided families; on Kasuri's response, the Srinagar religious leader was silent.

Secessionist politicians in Srinagar expect that Kasuri will have placed considerable pressure on Mirwaiz Farooq to temper his opposition to the Islamist faction of the All Parties Hurriyat Conference (APHC) led by Geelani, and backed by the Jamaat-e-Islami (JeI) - and to reduce the visibility of the pro-dialogue, centrist factions he heads. Hit by the assassination of several close relatives and aides, frightened by the burning down of his seminary, under threat from both the Hizb-ul-Mujaheddin (HM) and Lashkar-e-Toiba (LeT), and without an heir to carry on his clerical legacy, Mirwaiz Farooq may well choose the second option. Yet, the stakes for the centrists he represents are also high. Should they fail to shape a political agenda in coming weeks, Geelani's position will consolidate - and hopes that centrists will be able to directly negotiate a peace with New Delhi would receive a potentially fatal blow.

In recent weeks, Geelani has had considerable success in drawing in fringe groupings from among J&K secessionists into the ranks of his party. On August 30, the People's League chairman Sheikh Abdul Aziz formally joined the Geelani faction of the APHC. Mirwaiz Farooq's APHC, he claimed, had "deviated from the Hurriyat constitution and entered into talks [with the Indian government]", which he described as "a futile exercise". Aziz said his organisation would only participate in three-way talks between India, Pakistan and representatives of the people of J&K, a formulation New Delhi has traditionally rejected. APHC centrists had begun to abandon this formulation in the wake of the Kargil war, instead pushing for direct dialogue with New Delhi. 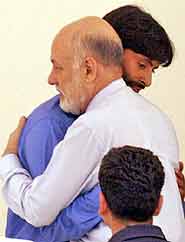 Days later, on September 3, the chairman of Mahaz-e-Azadi, Azam Inqilabi, urged non-aligned secessionist groups, notably Yasin Malik's Jammu and Kashmir Liberation Front (JKLF) and Shabbir Shah's Democratic Freedom Party, to join Geelani. Speaking to journalists in Srinagar on September 3, Inqilabi used a formulation similar to that of Aziz, asserting that future dialogue needed to involve not just India and Pakistan, but representatives of Kashmir. Although both Malik and Shah have stayed away from the centrist APHC's dialogue with New Delhi, and sought for some time to reconcile the warring faction's, these secessionist leaders have so far resisted being corralled into Geelani's formation.

Geelani, interestingly, has adopted a position of opposition to any dialogue - including the ongoing process between India and Pakistan. A recent statement issued by his APHC faction said that confidence building measures like the opening of the Srinagar-Muzaffarabad route, "or sticking to the ego for menial interests" would not help solve the conflict in J&K. The press release had opposed the scheduled meeting between Kasuri and India's Foreign Minister, Natwar Singh, arguing that that bilateral talks had historically failed to produce workable solutions to the problem. "These talks are doomed to fail until the people of Jammu & Kashmir are associated with the process", the statement read. Geelani reiterated this position after speaking to Kasuri, declaring, "bilateral dialogue has no effect on ground situation in J&K. Until the contentious issue of J&K is resolved, nothing will be achieved. All efforts are in vain."

This rejectionist polemic was provoked by the killing of the HM's 'intelligence chief', Abdul Rashid Dar, on the eve of the Kasuri-Singh meeting. Operating under the alias Tariq Aziz, Dar had served over the past eight years as the HM's 'Deputy District Commander' and 'District Commander' in Pulwama, before assuming charge of its 'intelligence wing'. Indian forces have not taken responsibility for Dar's killing, but the Geelani faction of the Hurriyat said he had been "martyred". Representatives of the group later visited Dar's family. Significantly, the HM itself said nothing on Dar's killing - a sign of how similar Geelani's activities now are to those of a political wing of the grouping.

At least some believe Geelani's rejectionist position could have Pakistan's tacit support, as a means of slowing down the dialogue and confidence-building measures until major political concessions by India are forthcoming. Indian Prime Minister Manmohan Singh, speaking before the talks began, made it clear that further political progress would depend on an end to cross-border terrorism, something Pakistan has repeatedly promised in the past. Within Pakistan's Kashmir-policy establishment, however, there seems to be considerable confusion on the issue, with some arguing that an end to violence will strip that country of the sole leverage it has to extract concessions from India.

Desperate for some face-saving measures which would give a resumption of dialogue with New Delhi political saleability among their constituency, the centrist APHC leadership is finding the political climate inhospitable. On August 31, the centrist APHC - like the Islamist APHC - attacked the United Progressive Alliance (UPA) Government's handling of J&K, criticising it for placing "conditions and pre-conditions" for dialogue. The grouping, which had held two rounds of dialogue with the earlier National Democratic Alliance (NDA) Government, said that both India and Pakistan had at that time realised the futility of rigid positions, and had decided to move ahead. However, it argued, the coming to power of the UPA Government had meant that the situation had "returned to square one".

What isn't clear is just what New Delhi can do to bring the centrists back on board. Proposals like a phased reduction in troop strength in J&K, or a unilateral ceasefire, are simply unworkable as long as terrorist violence continues. Nor can the centrists deliver anything to New Delhi in return, most notably a reduction in levels of violence. Islamists like Geelani, for their part, have no real reason to allow dialogue to go ahead as long as India is unwilling to make the kinds of significant territorial concessions that would be acceptable to Pakistan. Pakistan, in turn, has brought about a phased reduction in levels of support to terror since 2002, but seems unwilling to go further until Indian concessions are made. India cannot make those concessions, because of their implications for its sovereignty and domestic political opinion.

So what might happen next? Almost unnoticed by observers, Kasuri held out a threat. Kashmiri groups, he said on September 5, had "complained that human rights violations had increased since November. " Its hard to see just what factual basis Kasuri's claim has - both killings of terrorists and of civilians by Indian forces are at record lows this year - but infiltration had fallen sharply from December 2003, as part of a calibrated Pakistani response to open up the way for talks with New Delhi. Read through this prism, Kasuri could be signalling that in the absence of a breakthrough, or at least a reduction in Indian military presence in J&K, cross-border terrorism will be unleashed at full-scale levels again. With 17 Brigades tied down in Wana, the Pakistan Army may be feeling insecure about its eastern flanks and wish to ensure that Indian forces are occupied.

The fact is, since the peace process began in 2000, the fundamentals of the problem in J&K have not changed - and seem unlikely to do so any time soon.