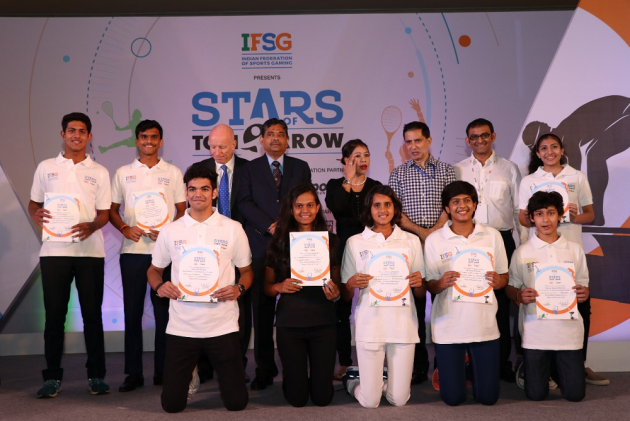 The Indian Federation of Sports Gaming (IFSG), India's first sports gaming industry body committed to protect consumer interests through self-regulation, recently launched its athlete support programme 'Stars of Tomorrow' (SOT). The programme has been created with an aim to identify and support India’s future sporting talent in diverse set non-mainstream sports such as sailing, squash, tennis, swimming and golf to name a few.

Athletes selected under the programme will be offered critical support towards the fulfillment of their sporting goals. 168 entries were received from across the country, and after a rigorous selection process led by GoSports, who are the ‘Implementation Partner’ of this initiative, 13 talented athletes have been selected to be a part of IFSG’s Stars of Tomorrow programme.

Golfer Viraj Madappa, tennis player Pranjala Yadlapalli, swimmer Advait Page and squash player Yash Fadte are among the 13 players chosen by the Indian Federation of Sports Gaming (IFSG) as part of its ‘Stars of Tomorrow’ programme.

The 13 athletes will be offered critical support towards the achieving their sporting goals. The final 13 athletes were chosen by the Go Sports Foundation after scrutinising the 168 applications that were received from parts of the country. At a city hotel on Wednesday, the youngsters were given away certificates by World boxing champion, MC Mary Kom. Prof. Ratnakar Shetty, the former General Manager (Game Development) at the Board of Control for Cricket in India (BCCI), John Loffhagen, president of IFSG was present for the programme. Dream 11 Foundation, the primary contributor to the programme, handed over a cheque of Rs 3 crore to the IFSG to support the cause.

Felicitating the athletes at the event, Mary Kom, six-time World Amateur Boxing Champion, said. “I am happy to be associated with IFSG’s initiative as I feel that for India to truly become a sporting nation and be seen as a strong contender in the international arena, support needs to be given not only for team sports but also to individual sports. IFSG’s Stars of Tomorrow is another welcome step towards achieving national goals.”

“Talking about the future, we need more support. Without that, you cannot reach the highest level. If we are backed well, we can get more medals,” Mary Kom said. Launching the Stars of Tomorrow programme, John Loffhagen, President, IFSG, said, “Inspired by the Indian Sports Ministry’s efforts and initiatives, IFSG wants to facilitate and contribute towards building India as a great sporting nation. Being a part of the sports ecosystem, we feel it is our responsibility to enable the overall growth of sports and provide specific support to deserving athletes at an individual level.”

Commenting on the Stars of Tomorrow programme, Prof. Ratnakar Shetty, ex-Chief Administration Officer - BCCI & Advisor – IFSG, “Due to the consistent efforts and the rigorous campaign led by the Indian Sports Ministry over the last few years, we are seeing growing awareness and interest among Indians to follow and appreciate sportspersons. Through proper preparation, resources and sponsorship, talented athletes will get an opportunity to perform to the best of their potential.”