Despite Deuba's appointment, Nepal's rural hinterland remains outside the authority of the state apparatus and lacks the presence of elected representatives to govern the areas.
Facebook Twitter Google + Linkedin Whatsapp
Follow Outlook India On 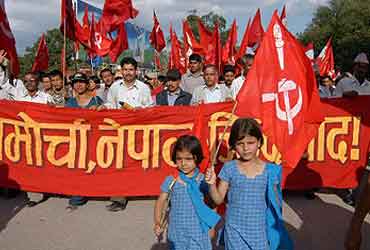 After a political vacuum of 22 days, King Gyanendra of Nepal has appointed a new Prime Minister, Sher Bahadur Deuba, ending political uncertainty at the center. Despite Deuba's appointment, however, the country's rural hinterland remains outside the authority of the state apparatus and lacks the presence of elected representatives to govern the areas.

In his first public statement, Prime Minister Deuba called on the Maoists to come to the negotiating table, but the latter are yet to respond to the invitation. The Maoists' response to Deuba's appointment as Prime Minister, however, was far from encouraging, and Pushpa Kamal Dahal aka Prachanda, the leader of the rebels, had denounced the King's move as a last ditch effort to save the feudalistic state. The Maoist leader further urged all his cadres to continue their armed struggle.

The Maoists have already forced the nominated representatives on local bodies to vacate their posts, and have demonstrated their strength by imposing blockades across large parts of the country, even as they roam freely in and around the villages and conduct 'judicial trials' through their 'People's Courts'. From the hills and mountains of the North to the plains of southern Terai bordering India, the Government has already pulled out of police stations, forest offices and other local administrative units in the rural areas. The Maoists are destroying the remaining administrative infrastructure, such as Village Development Committees (VDCs) and ward offices. Most of the nominated members of these various bodies have resigned, leaving no administrative machinery or control in the rural areas.

Following the resignation of Prime Minister Surya Bahadur Thapa on May 7, the Maoists intensified their activities in the rural areas, increasing pressure for the resignation of nominated heads of VDCs and District Development Committee (DDC) chiefs, and routinely imposing long term blockades in various parts of the country, forcing farmers to destroy their vegetables, crops and milk produce, as they are not allowed to move their goods to the market. After evicting the elected representatives from villages, the Maoists have now started to infiltrate the education sector, abducting more than 5,000 teachers and thousands of students. The schoolteachers are being abducted en masse in order to retrain them in the Maoists' 'People's Education System'. According to the Nepal Teachers' Association, the abducted teachers were taken to so-called teachers' training centers. In absence of VDCs and police stations, the schoolteachers are the only Government employees with a presence in the rural hinterland.

Moreover, in just the past month alone, between May 7 and June 4, the Maoists called general strikes on seven days, including five days of a countrywide blockade.

The local bodies - the face of the Government for the population in rural areas - had remained without elected heads after the then-Government allowed the tenure of earlier elected local bodies to expire in July 16, 2002, without conducting elections. The result was that 213,922 elected representatives, including ward members, were discharged. According to the Local Self-Governance Act (LSGA), 1998, each VDC consists of nine wards and each ward has a chairman and four members, including one woman. Like village wards, there are city wards in municipalities. From July 2002 to August 2003, the local bodies were under the control of civil servants who had little knowledge about the rural areas.

Having forced most political activists out of the villages, the Maoists had turned their attention to the nominated heads of local bodies ever since they took office. They issued many threats and even killed some of them, provoking a spate of resignations, which have hit the people the hardest. The Maoists killed the Chairman of Rasuwa DDC, 80 kilometers south of the capital, Kathmandu, last month; the Mayor of the Birgunj Municipality, which boders Raxual in the Eastern Indian State of Bihar; and shot the Mayor of Butwal, which borders Nautanuwa in Indian State of Uttar Pradesh.

The Maoists have also compelled western donor countries to suspend their projects in many rural areas of the far western region. Local Maoists recently issued orders to non-governmental organizations (NGOs) and International non-governmental organizations (INGOs) working in the areas to register themselves with the Maoist 'authorities'. The intention is clearly to increase the sphere of Maoist influence in the rural areas and to assert their authority. The Maoists have already set up 'Village People's Governments', 'District People's Governments' and 'Regional Autonomous Bodies'.

The Maoists have also demanded a role in defining the way resources are spent in programs sponsored by different donor countries. The growing pressure has compelled some donors to suspend their programs. Just a month ago, Germany's Technical Cooperation (GTZ), the Department of International Development (DFID) and Netherlands' Development Organization (SNV-Nepal) temporarily suspended their development activities in five districts of the far western region. As a result of the decision, more than 55,000 poor Nepalese living in the conflict zones are immediately affected. Many INGOs, such as Save the Children USA, the Lutheran World Service and others, have already pulled out from the far-western districts.

In a situation where Maoists continue to destroy the last vestiges of central authority in the rural areas, the Government appears to be losing its grip completely. According to the World Bank's Nepal Country Assistance Strategy, 2004-2007, the insurgency has increasingly challenged the fragile economy - the costs have been estimated at 8-10 per cent of GDP, including:

Furthermore, there has been a large direct impact on the livelihood of millions of primarily rural-based individuals, among whom killings, extortion, confiscation of goods and properties, forced recruitment, and infrastructure destruction, have created terror and resulted in migration, decreased agricultural production and declining living standards. It is estimated that more than 300,000 people have migrated to the Kathmandu valley in the recent past.

The costs of repeated economic blockades have also been very high and the farmers have been loosing millions of dollars in market sales. According to the Government's assessment, any impact on the agricultural sector is likely to trigger widespread alarm, since 76 per cent of the total population (23 million) are engaged in this sector in Nepal. Agriculture accounts for 40 per cent of total GDP. For 90 per cent of the poor, i.e. households in the bottom 25 per cent of the consumption scale, agriculture is the only income generating activity. Maoist moves to derail the agricultural sector could have a crippling impact on the national economy. Dr. Shankar Sharma, vice chairman of the National Planning Commission, notes that, "The economic blockade by the Maoists will have a long term impact on the Nepalese economy. Farmers have already suffered huge loss in the last two months frequent blockade. It will affect the annual GDP."

According to the Human Rights Year book 2004 published by the Informal Sector Service Center (INSEC), a human rights organization, farmers ranked third on the list of victims killed during conflict, after political workers and police personnel. In the year 2003, the report states, 139 agricultural workers were killed by the Maoists, and another 153 by Government Forces.

The casualties of the current conflict have risen into the thousands, and it has pushed the economy into recession. With a continuous erosion of the authority of the government over large parts of the country - virtually the entire rural hinterland - there appears to be little hope of relief for the people of Nepal in the foreseeable future.

Losing The Battle With Entropy