Left Front leaders had announced their plan to boycott the ceremony to protest what they had alleged were systematic attacks on their cadres and party offices across the state. 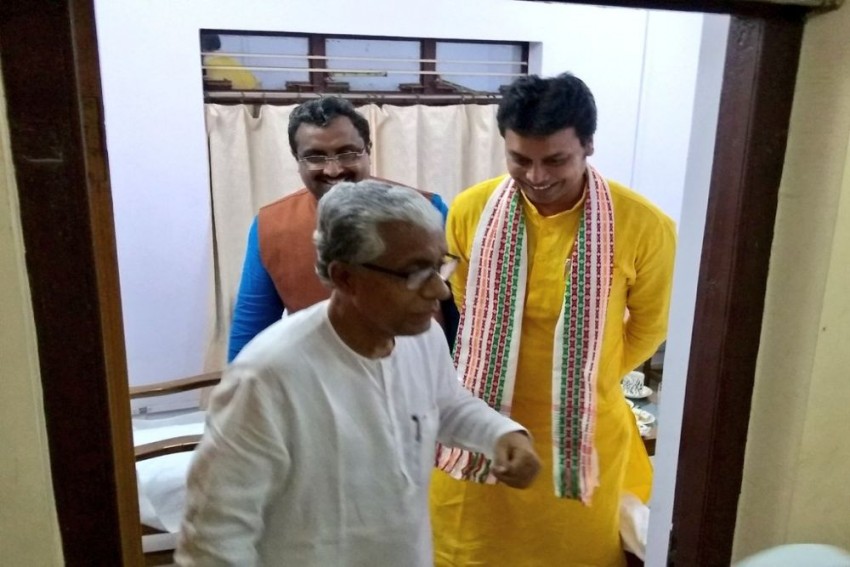 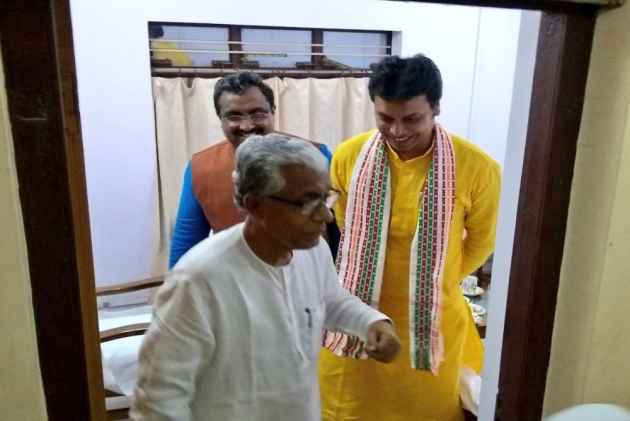 outlookindia.com
2018-03-09T14:41:11+05:30
Till a month ago, Bharatiya Janata Party (BJP) national general secretary Ram  Madhav accused outgoing Tripura chief minister Manik Sarkar of running a “corrupt” and “violent” government. But on Thursday, he couldn’t stop himself from praising the CPI(M) stalwart, who is widely hailed for his simple lifestyle and also known as country’s “poorest CM”.
On Thursday evening, Tripura chief minister  Biplab Kumar Deb and Madhav made a rare visit to the CPI(M) party office that is going to be Sarkar's home to invite him to Deb's swearing in ceremony in state capital Agartala.

Heaping praise on Sarkar on Twitter, Madhav said: “True to his character, he has shifted to the party office immediately after resigning as CM post the election. This is something that other leaders could emulate,” Madhav tweeted after he and Deb went to the CPM office to invite Sarkar.

Called on former CM of Tripura Sh Manik Sarkar at d CPM office and invited him to d oath ceremony of d new govt tomorrow. True to his character he has shifted to d party office immediately after resigning as CM post the election. Something for leaders to emulate.

Left Front leaders had announced their plan to boycott the ceremony to protest what they had alleged were systematic attacks on their cadres and party offices across the state. However, Sarkar accepted the invitation and attended Friday’s swearing-in ceremony.
Sarkar checked out of his official residence and quietly checked in to his new residence -- state party headquarters 500 metres away. Sarkar has refused the official perks for an outgoing chief minister, which include government accommodation, personal staff, multi-purpose worker and a house guard besides Y-category security.
NDTV reported that Sarkar would be living in one room of the party office guest house with his wife Panchali Bhattacharya. Sarkar reportedly told the cook that he would eat whatever is cooked in the party office kitchen.
Sarkar's wife had earlier told news agency PTI that she would be donating Marxist literature and books to the party office library and the Birchandra Central library in Agartala. The couple has no children.
"Mr. Sarkar is unlikely to avail himself of such facilities and will continue to live in the party office’s one-room guest house," a party member said.
“He moved in with his personal belongings and a few books. Only a TV set was added to the room for him to be updated with events across the world,” he added.
Tripura CPI(M) secretary Bijan Dhar said, “The party office has the basic minimum amenities. This is nothing exceptional. Most of our leaders lead a simple life."
Sarkar is the poorest chief minister with assets of Rs. 26 lakh, while Andhra Pradesh chief minister Chandrababu Naidu is the richest with assets worth Rs 177 crore, said a recent report.
The report is based on the self sworn affidavits filed by chief ministers of 29 states and two Union Territories prior to contesting the elections to the state assemblies/Union Territories.
West Bengal chief minister Mamata Banerjee and her Jammu and Kashmir counterpart Mehbooba Mufti have second and third lowest assets at Rs 30 lakh and Rs 50 lakh respectively.
This is not the first time when Sarkar is staying at the party office. Earlier too, he had to stay at the party office building after he donated his ancestral property to his sister. According to The Times of India report, Sarkar’s wife owns a real estate in the city but due to some controversy with the builder, their building is yet to be completed.
For in-depth, objective and more importantly balanced journalism, Click here to subscribe to Outlook Magazine