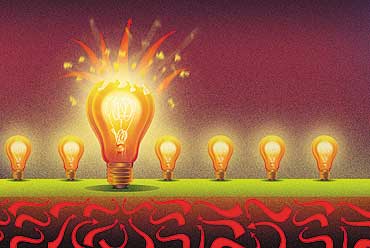 Is it likely that inflation will rise in India in the near future? Or, it could be asked, what are the factors that could fuel a rise in inflation and is there a case for any policy intervention? These questions have become relevant once again in recent weeks. First, we try to sort out the related but somewhat bewildering statistics. Inflation is measured by the rise in price indices. The rate of inflation as measured by the wholesale price index shot up from 3.2% in early April to 4.7% in mid-May. That was a sharp rise in a short span of time. Earlier, the growth in WPI had fallen more or less steadily from 4.7% in October 2005 to 3.5% in April. So, the good work of over six months was reversed in just six weeks.

However, measured differently and more correctly—by the consumer price index— inflation has been stable at around 5% since February this year for industrial workers and, it has been a shade higher than that for agricultural labourers. But, we do not know what happened to the CPI in May since these data come with some lag. Now, the problem is that the WPI and the CPI show divergent trends over the seven months from October 2005 to April 2006. While the WPI shows a fall in inflation from 4.7% to 3.5%, the CPI-IW shows a rise from 4.2% to 5% and the CPI-AL shows a rise from 3.2% to 5.6%.

So, the statistics neither provide us an unambiguous measure of inflation as it stands around now, nor do they even provide an unambiguous sense of the direction in which it has been moving. So, then what should we make of the sudden rise in the growth of the WPI from 3.2% to 4.7%? Apparently, the Reserve Bank of India has taken this rise very seriously. On 8 June, it hiked the repo and the repo reverse rate by 25 basis points each presumably as a precautionary measure to stem any further rise in the inflation rate.

The current rise in inflation reflects short-term supply glitches that get corrected soon rather than a structural rise in prices in the economy. The acceleration of the WPI during the first few weeks of the current fiscal year is largely on account of the spurt in prices of agricultural commodities. Prices of rice, wheat, bajra, pulses, milk and fish rose sharply during this period. As a result, the year-on-year growth in the wholesale price index for primary food articles shot up from 3.5% in the last week of April to 7.3% in the third week of May. This increase in prices is not exceptional. And, it is certainly not structural. It reflects the usual changes in supplies of commodities with lumpy production cycles that get corrected eventually. For example, the CPI-AL had risen to 7.2% in February, but it got corrected to 5.3% in the subsequent month without any policy intervention. And, the 7.3% rise in the primary food articles index was already down to 7.1% in the next week.

If you see what is happening to the more organised and non-lumpy production sectors such as manufacturing, the point that there is no structural rise in inflation becomes crystal clear. The WPI for manufactured products has been growing at a steady 2-3% per annum. This low rate of inflation is remarkable and is a good reflector of the structural stability of inflation in India. Variations in inflation are caused largely by the agricultural commodities and by changes in administered prices of energy. Thus, there is no case for any claim of a structural rise in inflation.

But what about the rise in prices of crude oil and the consequent rise in prices of petroleum products? Won’t these have a cascading impact on overall inflation. The answer is in the negative. Fuel prices are not the only inputs in the economy. Prices of some inputs go up and other go down. Prices of telecom and air transport have fallen and so have those of several electronic goods. A rise in prices of petroleum products has never led to the kind of problems that have been created by the rise in prices of sugar, edible oils or onions. Inflation has risen mostly because of domestic shortages that have been denied a correction by restrictions on imports. And often, the solution to a sharp rise in inflation has been the freeing of imports. In fact, after tariff and non-tariff restrictions on imports were removed inflation has come down structurally.

Thus, the solution to a fear of inflation is to further free imports from restrictions—in petroleum products for example. Have you ever wondered why the price of petrol in India is nearly twice as much as it is in the USA in spite of India claiming to have the most efficient refineries of the world and in spite of the government providing subsidies to keep prices low?! Any buyer of fruits and vegetables from the local markets will tell you that prices do not rise when petroleum product prices are raised by the government but they rise when truckers stop the supply of goods. Wheat prices need not have risen if imports were allowed freely. Supply restrictions are a greater cause for inflation than demand surge. For example, high fiscal deficits do not have a clear empirical link to inflation in India. Inflation has declined over the long period independent of the changes in the fiscal deficit. Similarly, any effort at liquidity absorption would possibly have an impact on the financial markets in the short run. But, it is unlikely to impact inflation.

Inflation is unlikely to hurt the economy. However, a rise in interest rates could spell trouble. It could adversely impact the growth in consumer spending. The pick-up in consumer demand in recent years is largely the result of lower interest rates. It is important that we maintain a high rate of growth to ensure a healthy rise in employment. And in the mean time it would be good to fix the measures of inflation and to undertake more empirical studies to find the causes of inflation.