Led by Yuvraj's heroics (2-34 and 48), India take an unsurmountable 4-0 lead by virtue of their four-wicket victory in the fourth one-dayer at the Nehru Stadium and create a new world record by registering their 15th win on the trot while chasing. 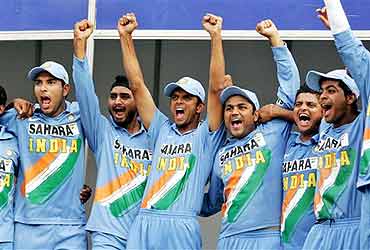 India maintained their exhilarating run of one-day conquests by taking an invincible 4-0 lead in the seven-match series against England with a comfortable four-wicket victory in the fourth game here today.

After relying on the slow bowlers to bundle out the visitors for a modest 237 in 48.4 overs, the home team romped home with 16 balls to spare to record their third series win since October last year.

It was a clinical display by the hosts who bowled well on a good batting track before captain Rahul Dravid (65), the in-form Yuvraj Singh (48) and Irfan Pathan (46) played useful knocks to steer the team to the victory target in 47.2 overs and record their eighth consecutive win and a world record 15th victory on the trot while chasing.

Mahendra Singh Dhoni hit the winning shot by taking a single off Gareth Batty to trigger off wild celebrations in the packed galleries at the Nehru Stadium as well as in the Indian dressing room.

The victory meant that the remaining three matches of the series have been rendered inconsequential, leaving the Indian team management the option of trying out the bench players.

The two teams will now travel to the north eastern city of Guwahati for the next match on April 9.

India started their chase on a confident note with Virender Sehwag and Dravid negotiating the new ball bowlers with ease to put on 54 runs for the opening wicket in 11 overs. Under fire for his prolonged form slump, Sehwag tried to break the mental shackles with a couple of fluent strokes but once again failed to build on his start, holing out in the deep off Ian Blackwell for 26 which came off 33 balls.

Pathan, coming in to bat at number three as he did in the previous tie in Goa, once again justified the faith of the team management in his batting abilities by sewing a 76-run partnership with Dravid.

The Indian captain looked in glorious touch throughout his 73-ball knock, cutting and pulling with aplomb. He drove James Anderson for two fours in one over, first driving him on the on side and then unleashing an exquisite square cut.

Dravid reached his 69th ODI 50 and 7th against England with a single off Matthew Hoggard in 62 balls with the help of six fours.

Pathan and Dravid were out to rash shots in the space of three overs when the second power play was taken.

Dravid was out to a tame catch by Hoggard off Andrew Flintoff when he mistimed a drive while Pathan was stumped while going for a huge heave off Ian Blackwell.

Even before the Indians could come to terms with the twin dismissals, they received another blow with the struggling Mohamamd Kaif being sent back to the pavilion for 5, India being reduced to 152 for four.

Kaif was promoted up the order to enable him to sort out his batting following his disastrous outings in the series so far but the UP batsman failed to make the most of it.

Yuvraj and Suresh Raina, heroes of India's 39-run win in Goa, then took the team to within sniffing distance of victory before being dismissed within the space of one ball by James Anderson (2-53) with the score reading 224 in the 42nd over.

Dhoni and Ramesh Powar ensured there were no more jitters by overhauling the target comfortably.

Yuvraj, who took two wickets in England's innings, was declared man of the match, his second on the trot in the series.

Earlier, the visitors did well to overcome a shaky start and were cruising at 117 for two before they lost wickets in a heap to the slow bowlers to be bowled out in 48.4 overs.

Kevin Pietersen top-scored with an 82-ball 77 while Geraint Jones scored a cameo 49 in the only defiance from the visitors on a flat track after Flintoff (12) won the toss and elected to bat.

The efforts of the Indian bowlers and fielders meant England failed to play out their full quota of 50 overs for the fourth time in the series.

It was Yuvraj (2-34) who started the slide by breaking the 90-run partnership between Pietersen and Paul Collingwood (36) in the 22nd over as England lost the remaining seven wickets for the addition of just 120 runs.

Sehwag, having a nightmarish time with the bat, also chipped in with two wickets while Harbhajan Singh was the most economical, conceding 36 runs off his 10 overs while picking the prized wicket of Pietersen.

England were off to a shaky start, losing opening batsman Andrew Strauss for seven in the third over and his partner Matt Prior in the sixth. Strauss was trapped leg before by Pathan while Prior was caught behind off Sreesanth, playing before his home crowd for the first time, for 14.

Pietersen, back into the squad after recovering from a stomach bug and promoted to number three, and Collingwood then steadied the innings with a 90-run partnership off 96 balls for the third wicket.

The flamboyant Pietersen (6x4, 2x6) largely suppressed his hard-hitting instinct but let it go on a couple of occasions like when he got up on his toes to crack Ajit Agarkar away for a four through the covers and slammed a short one from Sreesanth for a six.

Collingwood too looked comfortable out in the middle, sweeping Harbhajan for four to bring up England's hundred in the 18th over.

Just when their partnership was assuming dangerous proportions, Yuvraj struck for India when he took a superb reflex catch off his own bowling to get rid of Collingwood.

The dismissal brought on Flintoff who wasted no time in unleashing one of his power-packed shots, hoiking Harbhajan for a four off the first ball of the 29th over.

But just two balls later, Harbhajan got his due when Pietersen top-edged a slog sweep to be caught by Yuvraj at backward square leg.

A bigger breakthrough was in store for the Indians in the very next over as Yuvraj sent back Flintoff (12) who edged while trying to loft the ball over mid-wicket, England losing two wickets in the space of two runs.

Both Pietersen and Flintoff were victims of the second power play, delayed until the 29th over by Dravid.