Security concerns have not dampened the spirit of Londoners because there's nothing that Londoners love more than Christmas! 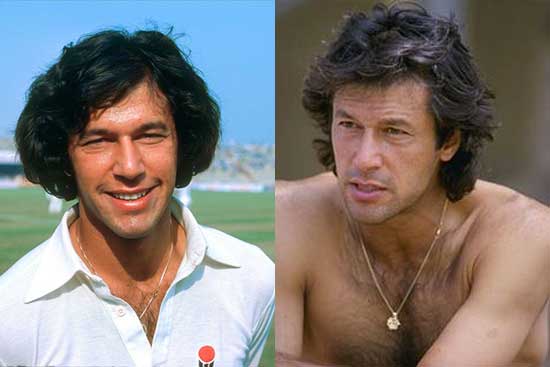 The man behind Imran Khan's zulfein!

In a recent TV conversation in India between Kapil Dev and Imran Khan, Dev quipped about the female fans Khan had, saying, "Inko dekhkar zulfein banaata raha raat bhar....(Upon seeing him, I kept doing my hair the whole night)" I happen to know the man behind Khan's popular hairstyle. The famous hair stylist Dar, then in his early 20s, had met Imran in London in 1978-79, when Khan just had a straightforward thick mop of hair on his head and was playing for Sussex. After their first meeting during a night out in London, Dar suggested that if he were to go out with Imran again the latter would have to first visit his salon (Vidal Sassoon at Sloane Square). Imran agreed, on the condition that it would have to be an easy wash-and-go style, and that's when Dar gave him the signature lion-look hairstyle. "It was short at the front and gradually getting longer at the back, to suit his long face and jawline, and not interfere with his bowling," Dar once told me. Gleefully he added, "After that cut, before we knew he was the Playboy of cricket." Since then Dar, till date styles his hair, something neither talk much about. Among his other famous clients Dar has had, are the likes of Paul McCartney, Mick Jagger and Goldie Hawn.

It's the time of year when London looks its most beautiful. Under the cover of gorgeous festive lights across the city despite the grey skies, office parties and Christmas shopping are at its peak. But after the recent Paris attacks and increased police presence there is a touch of caution. Following the Leytonstone knife attack there is a visible presence of armed police in tube and train stations under Project Servator. While the police presence gives a sense of security, it is a sad commentary on the times we live in. But security concerns have not dampened the spirit of Londoners because there's nothing that Londoners love more than Christmas! From the lights of Oxford Street to the smell of mulled wine in the air, adult Christmas pop-ups to special Christmas markets, it definitely is the most magical time of year in the capital.

Amidst heightened concerns of terrorism and Islamophobia, next month a controversial book, Choosing Sharia, written by Machteld Zee, a Dutch academic, will be published. For about a decade it has been known that there are Sharia courts in various parts of the UK, and now a research by the think-tank Civitas claims there are about 85 such tribunals, usually attached to mosques, which are believed to be operating in the UK.

In fact, there has been growing concern in recent years that Britain's Sharia courts are creating a parallel justice system the principles of which conflict with the law of the land, disregarding human rights and fomenting extremism. Just last week 150 women's rights groups gave a petition to David Cameron urging the Government to ban them from hearing divorce and other family cases because they are 'denying vulnerable women and children access to equality and human rights'.

In such an atmosphere Zee's book, based on her PhD thesis could be a very interesting reading.

Don't give yourself a 'text neck'

Yes, we are all aware of the health danger with over usage of our mobile phones. Now 'text neck' is the latest condition that people glued to their smart phones are complaining about. Hunching for hours over the small screen creates this painful condition. Doctors have already warned of 'texter's thumb', in which smart phone users develop repetitive strain injury.

The fall out of all this is that the Camden Council of north London has said that an 'always on' technology-obsessed culture is leaving workers exhausted and they are being forced to take more sick days. In its report it has said that the council needs to be more responsive 'to the digitisation mega-trend that is creating the 24/7 workforce, with employees operating anywhere, anytime on any device,' which may mean that employees are never off.

Driverless on the streets of London?

Jeepers! Imagine seeing driverless cars on the roads? That's definitely not a confidence-inspiring thought. But it could become a reality in the UK by 2020. Google has apparently held five meeting with the UK government over the past two years to discuss the launch of driverless cars in Britain. The US internet giant feels the UK could take a lead in developing laws for the vehicles, which are being tested in California and are expected to become publicly available by 2020.

Imagine depending on cars with sensor technology to spot pedestrians and other traffic! What if there is a technological glitch?

London property prices have most certainly gone through the roof. Imagine a small patch of roof in south London has been put on the market for £450,000. The seemingly exclusive third floor terrace on Bermondsey Street, which is currently undeveloped, comes with planning permission to build a 53 square metre one-bedroom flat, equipped with a lounge-cum-diner, bathroom and terrace.

Last month, a pre-fabricated "shed" in Peckham, south-east London sold at auction for just under £1 million and earlier this year a derelict outbuilding in East Dulwich sold for £440,000, exceeding its guide price by £115,000. A Londoner has to pay three times the price of an UK average property for their home. No wonder most are waiting for the bubble to burst and are renting out in the meantime.

Living In The Fool's Paradise