Bollywood loves stories of hope built on sweat, blood and tears. Look no further than Charu Khandal—the animator who defeated death and stillness.

In and around Yari road in Andheri, the buzz of youngsters involved in the entertainment industry is a constant—at those housing complexes that still lease to single men and women, at coffee shops, at recording studios, at ‘happening’ pubs and production houses. Nothing has changed for years, except for the welcome addition of Metro. Many hopeful boys and girls come, some make their careers and stay, or move up the ladder to shift to Juhu or Bandra, some don’t and return to their hometowns. Among the many who did make a successful career, was Charu Khandal. She is also one among those who had to return: in the most tragic turn of events, because of a near-fatal accident in 2012.

It was a spring evening—March 24, 2012. She was returning home with her sister and sister’s fiancé in an autorickshaw when it was hit by a speeding car. At the time of the accident, she was an award-winning animator working for Red Chillies Entertainment, owned by Shahrukh Khan. She was part of the team that won the national award for special effects for Ra.One, among the other honours it gathered.

But now, at age 28, she was left paralysed neck down and spent around three months at the Kokilaben Dhirubhai Ambani Hospital. For the first few days, Charu’s accident attracted a lot of media attention and even a visit from King Khan. After a few weeks—as the media shifted its focus elsewhere, finances started to dry up and her condition ‘stabilised’ to a bed-ridden, paralysed body with an active mind—Charu left for her hometown Jaipur to live an altered life. In the few months that intervened, she had regained her voice, though the lines of treatment she tried out as she held on in Mumbai with her family were all unsuccessful.

But all that was four years ago. Although her physical condition may have improved only marginally, Charu is now ready, mentally, to make a comeback. Equipped with a left hand that she can move slightly, an indomitable spirit and the collective help of her parents, siblings, doctors and experts of assistive technology, Charu now wants to leave the past where it belongs, in the past.

“I feel as if four years of my life have already been wasted. There is only so much I can brood about. It took me six months to talk normally. It took me sometime to accept. For a long time I didn’t go out. Whenever I have to go out, it’s like a caravan with me and my mom and more help. But the past few months I have been reading and talking to people. The only thing I want is some career. I feel if I can see a way, a path, I will run towards it,” says Charu, speaking to Outlook from her Jaipur home.

She had shifted to her parents’ place after spending months in Mumbai for treatments, during which her employer paid for initial hospital bills. Her parents have hired a help for the house but it’s her mother who is taking care of Charu and her daily chores.

For quadriplegic persons, according to doctors, patients and their families, the ordeal starts when they leave the hospital. Quadriplegia is a severe form of spinal cord injury, where a patient loses sensation neck down because the spine cannot send any signals to organs. Apart from inability to move, a patient also loses bowel and bladder control and runs the risk of developing bedsores and urinary infections, if not treated well. 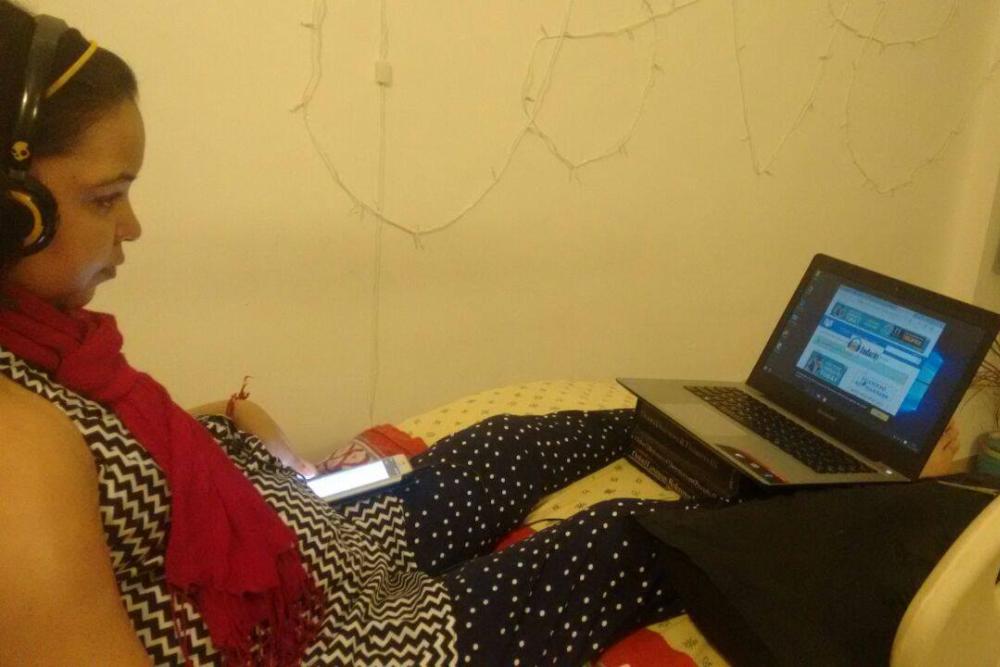 It takes months before a person with a spinal cord injury—whose brain is absolutely intact—can even begin to accept and believe the bed-ridden life. Doctors say patients go through various protracted phases of denial, acceptance, and then dealing with it. Families too have a hard time accepting the drastic nature of change in one of their own—even in the case of totally supportive ones like Charu’s (which all families need not be).

“For a long time, we were under impression that it was temporary. There were phases when she was severely ill and was lost. She wouldn’t sleep for days. When you are physically ill, the motivation for therapy also goes down. That phase was bad,” says her sister Ritu, who was also with her at the time of the accident.

Ritu went on to marry her then fiancé Vikrant, who, fortunately, has recovered enough to walk on his own, though he may not recover fully. “As it is, she is very intelligent and then when your rest of the body is still and only your brain is working, it works overtime. Things started getting better once she was connected on the tablet.”

Initially, back in Mumbai, desperation had taken them from acupuncture to medicines and quackery. But what would help her then and may help her in the future is physiotherapy and assistive technology. Prof Prabhat Ranjan, who was working at the Dhirubhai Ambani Institute of Information and Communication Technology, Gujarat, at the time of the accident, had developed a neuro-transmitter for Charu when she was at the hospital. He is now keen to help again after a gap of four years.

“I lost touch with her after she moved to Jaipur. But recently when I met her, I realised that with the additional movement in her hand, she can do much more. Nobody guided them about what treatments and trainings are available for quadriplegics. With voice-assisted gadgets she can do more,” says Prof Ranjan.

“Charu can be trained at our spinal centre in about two weeks. Even in three-four days there can be progress. Although her physical condition may not change, what she can do with the existent movements can be maximised,” says Dr Nekram Upadhyay, Indian Spinal Cord Injury Centre in New Delhi.

At Kokilaben Hospital in Mumbai, where Charu was first treated, Dr Abhishek Shrivastav echoes these thoughts. “We must do what we can. It is very expensive to get customised wheelchairs or to change your house to enable movement. Also, in India, most places are not disabled-friendly. So there is not much in terms of outdoor movement. But if she can use her hand and be creative, productive, it will help her tremendously.”

Doctors and psychologists emphasise the importance of remaining engaged in cerebral activities. “When she got to the stage where she could use the iPad, the negative thought process stopped. It is best when you are connected—reading, writing, talking,” says Ritu, who is amazed at Charu’s “overworking brain.” “There are many instances where she thinks quicker than anyone.”

The family is categorical about not asking for help from her previous employer. However, they have sought compensation and justice in the case that is still pending in the Mumbai court.

Charu is now trying to figure out if she can have an alternative career in the entertainment industry. “I would like to be as independent as I can be. I am planning to get some training in voice-dubbing. I can’t move physically, but now we can work online and whatever I can do, I want to.” In the altered life there is acceptance, effort and hope. And there is no scope for sympathy or patronising.

“We are always looking for a new surgery, new therapy. All the aggressive therapies are on. Most importantly, we are back to normal. We fight like we used to. We have late-night coffee parties when we meet. We are her hands and legs, if she wants a pani puri at midnight, because she could have it earlier, she will have it now too. We just have one life and there are many things to be happy about,” asserts Ritu, equally strong, if not more.

Even as her voice lessons begin on Skype and her training gets scheduled for Delhi, her friends in Mumbai talk about the family’s spirit with awe and respect. They say if there is anyone who can pull this feat off, it will be Charu and her family. At a busy junction in Versova stands WTF, a popular pub and eatery, a favourite of Charu’s. It is still around and awaits a round of toast for her when she comes back. Her sequel, no matter how arduous and delayed, will just be the story that everyone would love, including Bollywood—who knows, even King Khan.