A bench of Chief Justice Rajendra Menon and Justice V K Rao on Friday issued notice to the AAP government, Director General (DG) Prisons and senior officials of Tihar Jail seeking their stand on the matter by February 1, 2019. 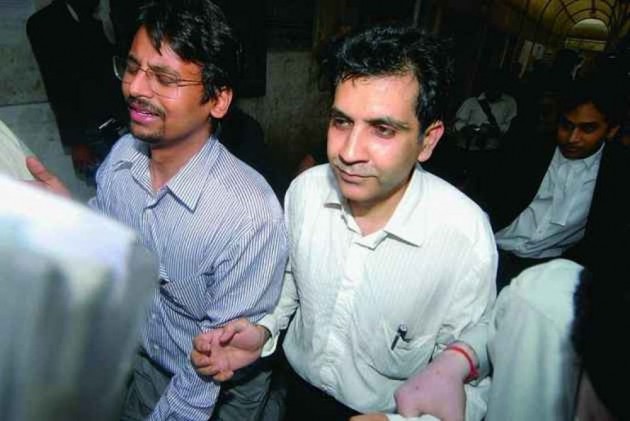 This was communicated to the Delhi High Court by Additional Sessions Judge Ramesh Kumar-II, who carried out inspection on September 4 following complaints from other inmates that Chandra brothers and others jailed for white collar crimes were enjoying "luxurious lifestyle".

He said in a report that the circumstances indicated "corruption" and "grave misuse of power" on the part of DG Prisons and Tihar Jail officials.

A bench of Chief Justice Rajendra Menon and Justice V K Rao on Friday issued notice to the AAP government, Director General (DG) Prisons and senior officials of Tihar Jail seeking their stand on the matter by February 1, 2019.

In the report, Kumar-II has recommended that an FIR be registered against DG Prisons and officials of Tihar Jail as such activities also pose an "extra burden on the public exchequer".

He has said that apart from household amenities, including mattresses, mustard oil, foot-mats and stools, in their cell, the brothers also enjoyed a separate "office" room having a computer with internet, a printer as well as eatables and Aquafina mineral water.

On the brothers' claim that they had bought the Aquafina mineral water from the jail canteen, the judicial officer found that only Bisleri was sold there.

Apart from that, the steel nets in the barracks housing the Chandra brothers were covered with blankets and boards "to avoid smell or outer air" from going into their cell, the report said.

It also said that such facilities cannot be provided to any inmate without the "involvement" and "knowledge" of the DG Prisons and other officials of Tihar Jail and proved as "positive" the complaint made by 25 inmates of Tihar Jail in their letter.

The report also indicates that the jail officials had told the ASJ that the letter was written by the inmates to pressurise them into providing extra facilities to the other prisoners which was not permissible under the jail manual.

The report also said that some of the complainant inmates were shifted to Mandoli Jail after they had sent the letter.

The High Court took suo motu cognisance of the report and the letter written by the inmates and turned it into a public interest litigation.

The inmates in their letter had claimed that while those arrested for financial crimes, like the Chandra brothers, were "enjoying an extra luxurious life in Tihar Jail" with a "separate VIP ward" for them, other prisoners were allegedly not getting sufficient food, drinking water, fruits and other necessities, including medical treatment.

However, those arrested for white collar crimes were getting specialised medical treatment for even minor ailments, had access to smart phones, could regularly communicate and meet with family members without hindrance, have home cooked meals, watch TV, play badminton and enjoyed a "luxurious life", the letter said.

The Supreme Court had directed a panel headed by former Delhi High Court judge Justice S N Dhingra to go ahead with sale of unencumbered assets of the directors of real estate major Unitech Ltd to refund money to hassled home buyers.