Kamal, Cauvery And Thyagaraja: Stray Images Of The Deccani River’s Past And Present

On World Environment Day (June 5), a take on a vital south Indian river that winds tight a uneasy tape across the ties between two riparian states while once having been the fountainhead of a harmonious music system.

Fledgling politician Kamal Haasan is apparently hopeful of an amicable settlement to the vexed old issue of the sharing of the Cauvery waters between his state of Tamil Nadu and riparian Karnataka, whose new chief minister H.D. Kumaraswamy the superstar met, incidentally, hours before the World Environment Day (June 5). It isn’t exactly another matter that the third-largest river in the Deccan, the 765-km Cauvery that flows eastward before emptying itself in the Bay of Bengal is not in the best of shape over years or decades.

Quite a lot of things ail the Cauvery in modern times: industrial units along its either banks flushing in effluents, the rise of a sand mafia, scanty rainfall adding to the ecological degradation, destruction of rain forests along its profile, heightened construction activity, invasive weeds forcing changed cropping patterns that don’t go well with the environment.... Not surprising, though sad, that the river with quite a few tributaries is just a trickle in several stretches down its course even when it meanders downstream across the fertile ‘delta’ stretch. 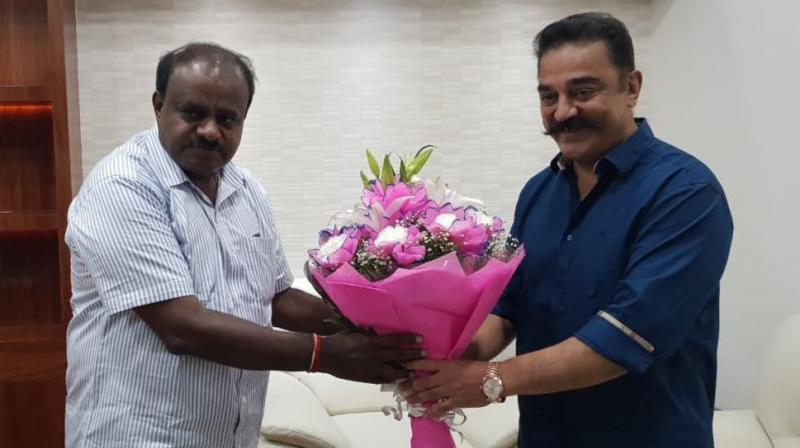 It is here that a view at the Cauvery some two-and-a-half centuries ago could be interesting. And that, through the eyes of one of the belt’s iconic cultural figures: classical composer Thyagaraja. The saint (1767-1847) has made passionate references about the Cauvery in many of his famed Carnatic compositions that brim with his love for the river in all its beauty—a pale version of which seems to exist in the 21st century.

Buffs note that Carnatic music, which drew much of its socio-cultural strength from the fertile belt of Cauvery, has itself scores of kritis that make revered mention of the lifeline river. Frontline violinists Lalitha and Nandini note that Thyagaraja has 16-composition set focusing on a particularly holy spot called Panchanada Kshetram, which is a convergence of five local rivers: Cauvery, Vadavar, Vennar, Vettar and Kudamurutti.

In an online discussion, the instrumentalist duo goes on to list the pool of the 16 compositions, adding that a single record of them has been sung and brought out by the renowned Bombay Sisters (Saroja-Lalitha). Today, on the highway from Thanjavur (not far from Thyagaraja’s native Thiruvaiyaru), the traveller would cross five bridges—each functioning as the roadway linking their banks.

The more scenic takes from Thyagaraja compositions come from new-age Carnatic composer Ramakrishna Easwaran, also a neurosurgeon. The scholar turns his lens on to an Asaveri-raga kriti of the saint that has its verses, typically, in Telugu. The opening line, Saari vedalina ee Kaverini joodare, translates into English thus:“Take a look at the magnificient river Cauvery. It further goes to say that “She (the river) fulfils the wants of people and cleanses their sins in a very unbiased way. More visual images appear subsequently: At one place on hills, she runs swiftly and fiercely making thundering noise. At another place, she flows gently as if she is showering compassion. Cauvery is like a gem among beautiful maids. She flows eternally.”

Dr Easwaran, in his views expressed on a popular Carnatic website, notes that the devotee in Thyagaraja pays his obeisance to the Cauvery even as the poet in him pays a tribute to the river’s stately gait—“just as the scores of Vedic scholars on its two banks, showering jasmines and hailing her as ‘Rajarajeswari’.” All this from a composer who has penned the famed ‘Nouka Charithram’ that essays a mythological boat ride by lord Krishna and the Gopika lovers along the Yamuna.

How come the composer wrote about Puranic scenes based on a river upcountry when his eyes and heart lay solely in the Cauvery? To this, Dr Easwaran says, “we would not be wrong to assume that the saint saw these sights on the Cauvery and transposed them to the Yamuna.”

In his article that quotes more Cauvery-centric compositions, the author notes that the Cauvery flows to its full breadth (akandam) for a few miles between Karur (past the Amaravathi sangamam) and Mayanur, where the Uyyakkondan channel takes off.  “You can stretch this segment further downstream to Mukkkombu where the Kollidam takes off.  It is a contrast to see the same mighty river, broken up in to innumerable channels, running into the backyards of village homes in the delta region,” he adds. “Thyagaraja’s music has similar and simultaneous attributes of majesty and easy familiarity. If we take the Pancharatnas to represent the akanda Cauvery, the Utsava sampradaya compositions are the people-friendly backyard rivulets.

Music lover S Balasubramaniam, with a streak of sarcasm, notes in the online discussion on Cauvery in Thyagaraja kritis that “Perhaps we may extend the search for other rivers as well when the Cauvery gets exhausted.”

Back to the Asaveri kriti, Saari vedalina has its second charanam meaning thus: “The cuckoo birds on trees nearby are singing melodiously in a festive mood. The Cauvery, as the prop for all living beings, is paying obeisance to Ranganatha at Srirangam by washing his sacred feet and is proceeding majestically to see the holy Panchanadipuram, the abode of Siva the protector of the fourteen worlds.”

Notwithstanding the imagination-thrust surrealism in the lines, Dr Easwaran notes, even today, it “is an elevating experience to simply sit on the banks of the Cauvery at Thiruvaiyaru during the dawn or dusk and watch it flow quietly.” All the same, the present-time Cauvery pops up a range of contrasting images about man’s relations with the nature—even as actor Kamal says he intends to act as a “bridge” between the two states vying to share the waters.