There is a sense of vindication, of faith restored in the justice-system, that there might be delays, but that justice is worth fighting for— now on to two other high-profile cases, Jessica Lall and Nitish Katara... 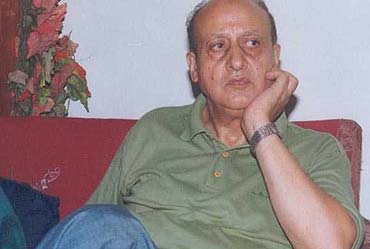 Chaman Lal Mattoo, Priyadarshini's father: Finally justice has been delivered. I can't express myself. I have no words to express how I feel. Justice has been done. Common people in the country can now breathe with ease. This is a step in the right direction. My daughter cannot come back. But at least, her soul will be in peace today.

It’s the young boys and girls of this country who kept this case alive. There may be judicial lapses but justice has finally prevailed. This judgement is a stepping stone for all those cases that are waiting for justice.

Hemant Mattoo, Priyadarshini's brother: To be honest. I had lost hope, the next day of the crime, because of the way it (investigation in the case) was handled....The way they (investigators) were going around doing the business. I had lost hope. I have been more hopeful than I was on day two of the crime. (After the media's attention and support from other quarters).

My father relentlessly fought for Priyadarshini. It’s a day of reckoning for him because somehow he always felt that he had let his beloved daughter down.

Vijay Shanker, CBI Director: The CBI welcomes the long-awaited judgement that the Delhi High Court gave today. We have pressed for the maximum punishment for the guilty and we will strive for the death penalty for him.

The stand of the CBI has finally been vindicated. We in the CBI perceive that this judgement shall be applicable as a benchmark for all investigating officers of the CBI as well as trial courts. We also believe that today's judgement will go a long way in restoring the faith of citizens in the criminal justice system.

After all the method of investigation by the CBI has been upheld by the Delhi High Court. If the CBI's appeal had come up for an early hearing, the prolonged agony of the Mattoo family would have been minimised.

The matter has been adjourned till the October 30. Santosh Singh was present in court and has been taken into custody. The HC judge has set aside the trial court’s order as perverse. Justice has been delayed but it finally prevailed. Santosh Singh can appeal in the Supreme Court and it is up to the court to accept or reject his appeal.

Indu Jalali, close friend of Priyadarshani: Though delayed, at least justice has been done. Today is the victory of the Indian judicial system and victory of the entire media, and the entire nation who stood behind us in this fight against injustice.

Adityaraj Kaul, member, 'Justice for Priyadarshini' campaign: We have faith in judiciary and this faith has increased 100 per cent. We never expected such a great response from judiciary as well as from the CBI.

Agnisheker, family friend: I am very happy. Santosh is found guilty on both the accounts -- rape and murder. I know the family very well. Priyadarshini belonged to a very respectable family and it has gone through a very bad phase in last ten years by not receiving justice. Finally, they have something to feel good about.

Neelam Katara, Nitish Katara's mother: My faith in the judiciary has been proved right after the verdict. However, the delays in such (murder) cases are frightening and can weaken the case of the prosecution. I am happy for Chaman Lal Mattoo. It is sad that he had to suffer a lot. Now, we can hold our heads up and say that justice has been done with their family.

People who have money can delay the case in so many ways. Now in my case, the main witness was sent abroad two years ago and she is still to depose. At least the family of the victim should be allowed to be part of the trial so that they get a say in the court proceedings.

Sabrina Lall, Jessica Lall's sister: All of us are pleased at the verdict. It is good that higher courts are appreciating the evidence, which is discredited by the lower courts, in the cases. The higher courts are also looking at these evidence fairly.