Home  »  Website  »  Arts & Entertainment  » Reportage  »  Jog Up To Raza: A Hand That Bowed The Violin, Another That Moved The Brush

Jog Up To Raza: A Hand That Bowed The Violin, Another That Moved The Brush

Today is the 96th birth anniversary of instrumentalist V.G. Jog and painter S.H. Raza. A look at the Hindustani musician and at a new book on the visual artist. 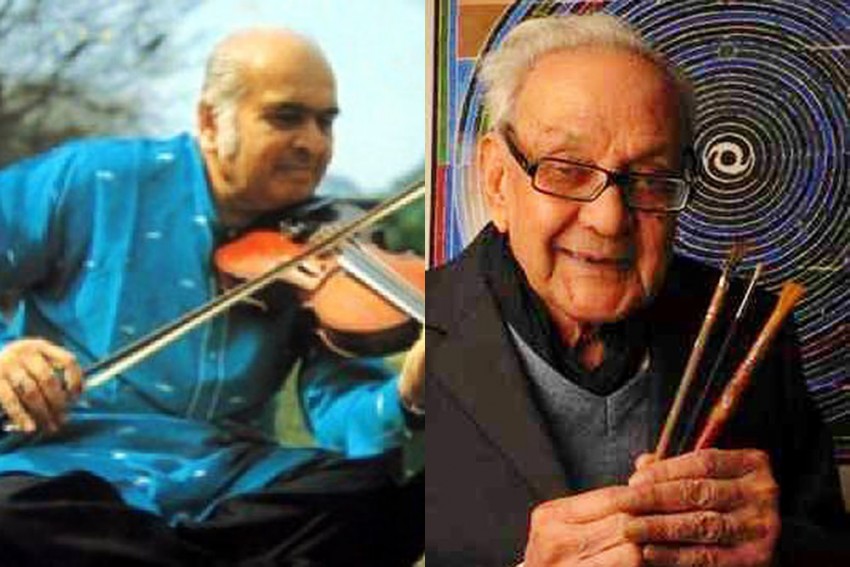 Sreevalsan Thiyyadi February 22, 2018 00:00 IST Jog Up To Raza: A Hand That Bowed The Violin, Another That Moved The Brush 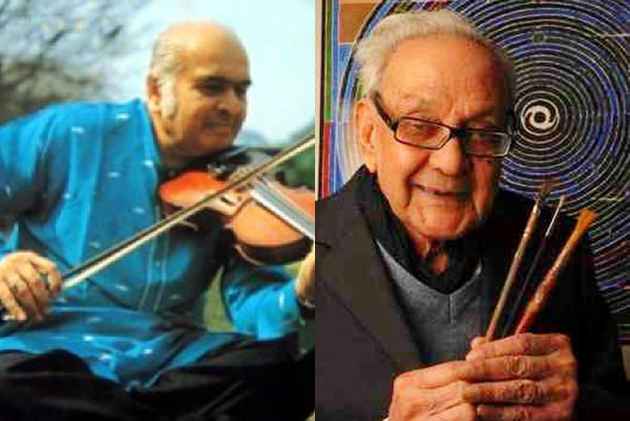 The year 1953 turned out to be decisive in the career of both the cultural stalwarts. For, that was when artist S.H. Raza chose to prolong his stay in Paris far away from his home in west-central India and instrumentalist Vishnu Govind Jog got a job in a broadcast station in his own country. The two were exactly the same age: 31.

Classical violinist Jog, most easily recognisable with his initials V.G. as the prefix, thus got a much-needed professional break. His entry into All India Radio assured him steady income, thus made his creativity focused as a Hindustani musician (without having to worry about financial matters). A continent away, Raza (who also had two initials [that stood for Sayed Haider] but was more known by his last name) had fallen in love with the French capital, where he sensed chances of broadening his worldview as a painter.

The two titans would have been 96 today. Born on February 22, 1922, Bombay had been one city that was common to both: it was in that western Indian metropolis that Jog grew up as a child, while a young Raza groomed himself further as a painter at the J.J. School before becoming a vibrant member of a cultural collective called the Progressive Artists Group.

Jog, in his deeper pursuit of raga nuances after initial training from S.C. Athavale and Ganpatrao Purohit, graduated at age 22 from Lucknow’s Bhatkhande Music Institute. He also taught there for a while. Then, farther east of the country, Jog, with his blended mastery in the Hindustani schools of Agra and Gwalior as well (having been also trained under Vishweswar Shastry and S.N. Ratanjankar), was invited to join the faculty at Ali Akbar College of Music in Calcutta.

Jog made the Bengal capital his city. Known for his pioneering attempt at institutionalising traditional music instruction in the Hindustani style, it was later sad news that the maestro was afflicted with Parkinson’s disease. On January 31, 2004, the Padma Bhushan awardee died, aged 81.

Raza, too, had won the Padma. In fact, all its three categories: the Shri, Bhushan and the Vibhushan. Six years after his return from Europe to India in 2010 and five months after his 94th birthday, the iconic painter breathed his last on July 23, 2016.

Around the time of what turned out to be Raza’s last birthday, a book on the artist was conceived to be brought out as a compilation of some of his writings. Recently published under the title Seeing Beyond, it unveils the evolution of Raza’s famed ‘Bindu’ series of paintings. Such is the stringing together of the letters that it gives the reader of the 128-page work a deeper idea of how it happened, evolved and flourished.

“It is not quite a question of nostalgia,” notes the modern Indian artist, who ended up spending 57 years in Paris. “This (‘Bindu’) is a very deliberate and conscious attempt to go to my sources, as far as possible to my childhood,” adds Raza. “In fact, one’s whole life is formed in the first few years of one’s experience,” points out Raza, who was born in wooded Babaria of what is today Narsinghpur district in Madhya Pradesh.

At the start of the 128-page book, which features his musings penned in English, Hindi and French besides a few of his paintings, Raza recalls his primary-school days in a central-Indian village known for its wild vegetation along the banks of the Narmada. His headmaster, Nandlal Jhariya, found the boy a bad student but took to him kindly. “After the classes, he asked me to stay back. On the white wall of the verandah he drew a blank point, asked me to sit down and just look at this point. I was eight years old then and could not understand the motivations but I obeyed,”Raza trails off.

Years later, “I realized that Panditji, as we called him lovingly, wanted to draw my wandering mind to a point, the bindu so important in Hindu Darshan, as a focal point of concentration, a concept which is steeped with potential and wisdom of generations.... The concept has pursued me as a lone star guiding me in life and my work as a painter all through my life.”

Down the book brought out by the Raza Foundation, the artist notes that ‘Bindu’ seemed to open up immense possibilities in terms of painting based on elementary geometric terms: the point, the circle, vertical, horizontal and diagonal lines, the triangle and the square. For the painter, “it opened a whole new vocabulary which corresponded, in a sense, to my training in Paris in formalism.

The first work so realised was a dark black bindu (dot) with grey and white radiation around—within a square frame. In the centre of the circle were a vertical and a horizontal line. “That was the genesis. Slowly, colours started appearing—at first, rather dull, and later, more and more bright.” At Delhi in the Indian Triennale the following year, Raza exhibited his 1980 painting titled ‘Bindu’ (in what later began to churn a series).

In an equally interesting string of anecdotes, Padma Vibhushan Raza crisply explains how his quest for a certain stream of art took a dramatic U-turn in the second half of his career. Overall, Seeing Beyond comes up as an honest prism that takes a kaleidoscopic view of the Indian and European art scene over its defining period starting from the early 20th century till recent times.