The attacker dropped the weapon and fled the spot, police and eyewitnesses said.

A gunshot rang out at Constitution Club in the high security area near Parliament on Monday when an unidentified man targeted JNU student leader Umar Khalid, who escaped unhurt, eyewitnesses said.

The attacker dropped the weapon and fled the spot, police and eyewitnesses said.

Police sources said they had seized the weapon. As confusion persisted over what had actually happened and how many people were involved, Ajay Chaudhury, joint commissioner of police, New Delhi range, said police was investigating whether shots were fired or not.

Giving his version of what had happened, Khalid said he was going back inside the complex, which also houses the Mavlankar Auditorium and MP quarters on Rafi Marg, after having tea when somebody tried to fire at him. 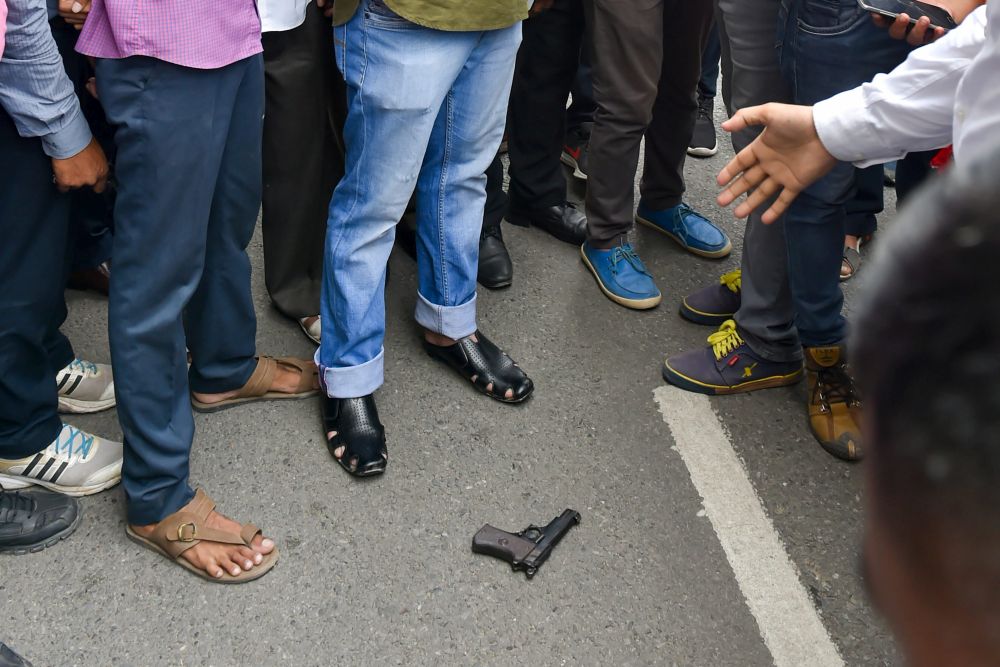 Police have seized the gun that was dropped by the accused while fleeing (Image Credit: PTI)

"I was returning after having tea. One person came from behind, pushed me down and tried to fire at me. I ran for my life. He fled from there," Khalid told reporters.

He said he could not see the face of the attacker.

"I do not know whether it was handiwork of some group and if others accompanied the attacker. It's ironic that it happened as I have come to participate in an even against mob lynching.

"There is an atmosphere of fear. If you speak against the government you will be branded and then anything could happen to you," he said.

Some witnesses claimed two shots were fired when Khalid was at the entrance of the club, where he was going to attend a conference, 'Khauff Se Azaadi' (Freedom from Fear), organised by United Against Hate and featuring speakers such as lawyer Prashant Bhushan, Delhi University professor Apoorvanand and the late Rohith Vemula's mother Radhika Vemula.

"Khalid said he was attacked. Somebody pounced on him and tried to fire at him but the person could immediately not fire. People started chasing him. According to Khalid, he tried to fire in the air. CCTV is being examined to verify the incident," said Madhur Verma, deputy commissioner of police (New Delhi).

Narrating what had happened, Saifi, who was with Khalid, said they had gone to have tea and three people approached them.

"One of them got hold of Khalid which he resisted. There was a melee as a gunshot was heard. But Khalid was not injured. While the accused were fleeing, they fired one more shot," he told reporters at the spot.

Ban Jyotsana Lahiri, who was also there at the time, added that a man carrying a gun came from behind them and grappled with Khalid.

"There was a scuffle. He shot from the gun after which he fled,"

Eyewitnesses also said a man in a white shirt who appeared to be the main attacker could be seen running towards Parliament Street.

The incident, which took place around 2.30 pm, comes two days before Independence Day when the city is on security alert.

Delhi Police's top officials reached the spot as news of the incident came in.

The student leader recently filed a complaint with the Delhi Police that he and Gujarat's Independent MLA Jignesh Mevani had received death threats from a man who identified himself as fugitive gangster Ravi Pujari in June.

Khalid had said he was informed by Mevani about the threats, and had not received any call himself.

He hit the headlines in 2016 when he and former JNU Students Union president Kanhaiya Kumar along with three others were charged with sedition for allegedly raising anti-national slogans during an event on campus to protest the hanging of Parliament attack convict Afzal Guru.

The university recently refused to accept his PhD thesis following which he had moved court.

Last year, an invitation to him for a seminar on "Culture of Protests" at Delhi University's Ramjas College, which was withdrawn by the college authorities following opposition by the ABVP, led to clashes and violence in North Campus.