The turnout in rural areas was significantly higher in Kashmir Valley unlike during the recent urban local bodies elections where barely four per cent of the electorate voted. 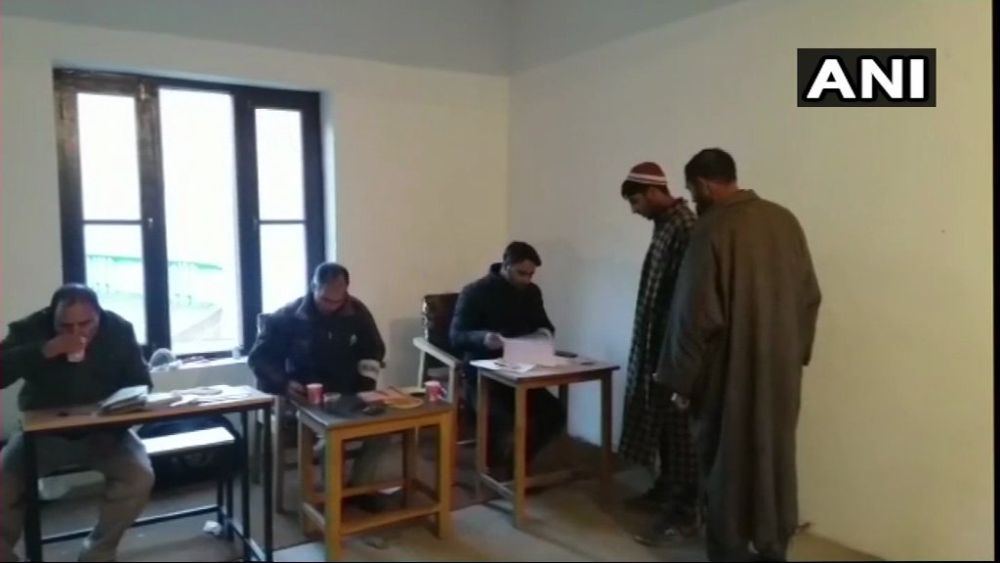 Over 64 per cent of electorate voted Saturday in the first phase of Panchayat elections in Kashmir while an impressive turnout of 79.5 per cent was recorded in Jammu region, officials said.

The turnout in rural areas was significantly higher in Kashmir Valley unlike during the recent urban local bodies elections where barely four per cent of the electorate voted.

Separatists who asked people to boycott the polls had called for a strike Saturday. Major regional parties the National Conference and the Peoples Democratic Party too had decided not to participate in the local bodies polls.

As per officials, total polling percentage in Kashmir division was recorded 64.5 per cent as 1.05 lakh of 1.63 lakh voters exercised their franchise in the Valley, they said.

The total polling percentage in Jammu division was 79.5 per cent as 2.35 lakh voters out of 2.95 lakh voted, they said.

Jammu & Kashmir: Voting is underway for the first phase of Panchayat polls; Visuals from a polling station in Rajouri's district's Manjakote pic.twitter.com/VxcenlaPTs

The officials said the total number of electorate in these polling stations was 1,35,774 in Kashmir.

There will be eight more phases of panchayat polls in Jammu and Kashmir.

The first phase polling was held in 47 blocks, including 16 blocks in Kashmir, 21 in Jammu and 10 in Ladakh region.

The polls are being held after a delay of two years when the state is under the Governor's rule. The counting of votes will be held on November 27.

Mehul Choksi May Return To India In 3 Months If Medically Fit: Lawyer