The picture, which showed Yadav standing with an unidentified woman and a bottle of liquor in the backdrop was released at a joint press conference called by JD(U) spokesmen Sanjay Singh, Neeraj Kumar and Nikhil Mandal 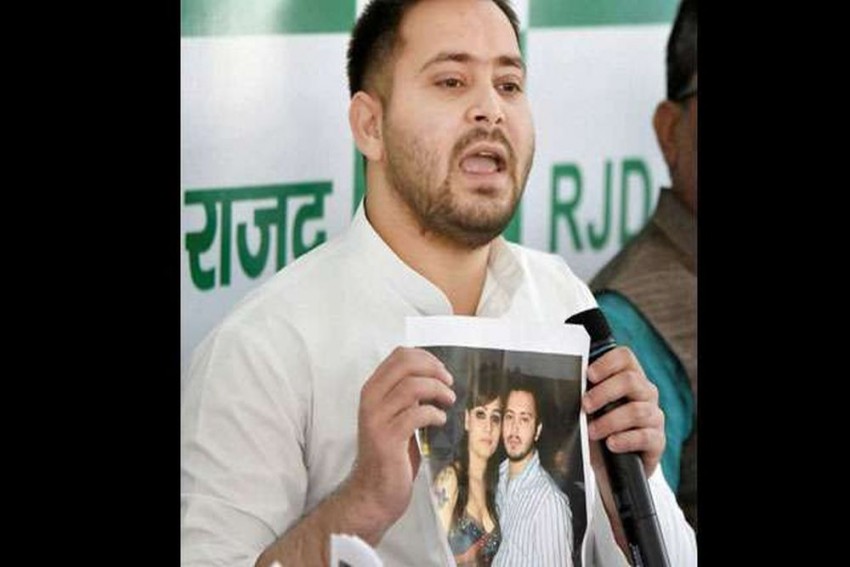 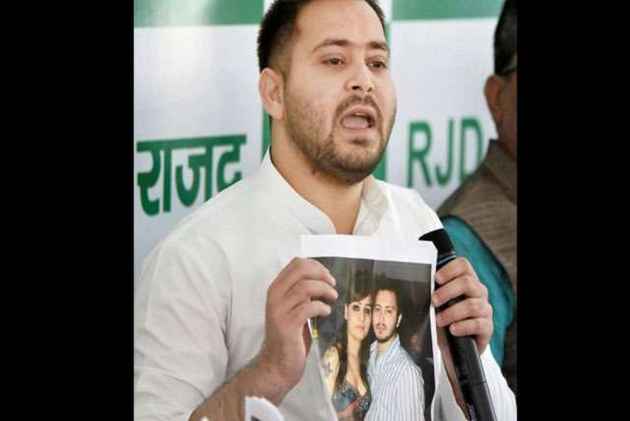 A slanging match erupted on Bihar's political scene on Friday with the ruling Janata Dal (United) releasing a photograph of opposition leader Tejashwi Prasad Yadav to allege that younger son of Lalu Prasad was used to a life of revelry.

In a quick retort, Yadav alleged that the exercise was the ruling party's reaction to chief minister Nitish Kumar's "careflly cultivated image taking a beating following our exposes on corruption and illicit liquor trade in his rein".

The picture, which showed Yadav standing with an unidentified woman and a bottle of liquor in the backdrop was released at a joint press conference called by JD(U) spokesmen Sanjay Singh, Neeraj Kumar and Nikhil Mandal.

"You all can see the so called Bihar youth icon's photograph in which he is having a good time. We wonder about this 'rang' (colour) of Tejashwi Yadav. Is this the sanskar (values) he has imbibed from his father (RJD supremo) Lalu Prasad", the JD(U) spokesmen said in their stinging comment.

At a press conference called a couple of hours later, Yadav returned the fire alleging "the standard of politics hit rock bottom in Bihar today and this has been at the behest of Nitish Kumar who is upset that our relentless campaign against corruption and illicit liquor trade in his rein which is tarnishing his image".

On his picture released by JD(U) spokesmen,he came with the defence that "the picture predates my entry into politics. It was clicked during my cricketing days. Perhaps at a party thrown during an IPL match. I wonder what is so objectionable about the photograph and what is the JD(U) trying to prove by resorting to such tricks".

The JD(U)'s attack on Tejashwi Yadav comes a couple of days after the RJD leader had released the picture of one Rakesh Singh, named in an old hooch case, with Chief Minister and JD(U) president Nitish Kumar.

Yadav had, citing the picture, alleged that because of involvement of JD(U) leaders, illicit liquor business was thriving in Bihar since sale and consumption of alcohol was banned and termed the total prohibition policy of Kumar a "farce".

The JD(U) on its part had expelled Rakesh Singh, a block level leader of the party, as soon as the controversy arose.

Kumar had at a public function also claimed that he was unaware of background of Singh who had visited his residence along with a resident of Bhojpur district,who had refused to accept dowry for his son's marriage after being inspired by the CM's call for stamping out the social evil.