The newly-appointed coach is confident of not only arresting the slide but also masterminding an upturn. 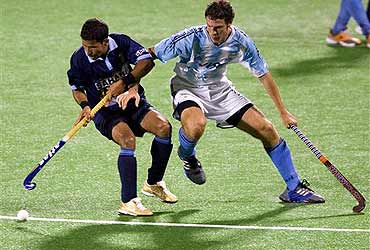 outlookindia.com
-0001-11-30T00:00:00+0553
Since his playing days, Indian hockey has slumped to an abysmal low but newly-appointed coach Joaquim Carvalho is not short on confidence that he can not only arrest the slide but also mastermind an upturn.

Having been part of the 1984 Olympic squad, considered as one of the strongest ever to leave the Indian shores in modern era, he finds himself in the hot seat as he seeks to resurrect the country's hockey fortunes.

Carvalho, or "Jack" to his friends, admitted that he was taken off-guard when the Indian Hockey Federation (IHF) offered him the post.

"It did take me by surprise, but after giving it a lot of thought and discussing with my close friends and family, I decided to take up the offer. In turn, the IHF agreed to give me the support staff that I wanted and also a say in team selection," he said during an interview.

Carvalho opted for two of his closest friends and former India team-mates, M M Somayya and Mervyn Fernandes, as members of his support staff to look into technical matters with Mohinder Pal Singh, the former ace penalty corner hitter, and Ramesh Parameswaran as assistant coaches.

In many ways Carvalho is a self-made coach who believes that players learn more and quicker on the field than through computers and whiteboards. Unlike a typical modern day coach, he hates to be "wired" or "stay connected" 24/7 and treats his mobile phone as an unavoidable nuisance than a necessity. His baggage does not include a laptop.

"I am not against modern technology but you need to understand that a player can absorb only so much of information at a time. During my playing days, I spent boring hours listening to lectures from my coaches or watching match videos and promptly forgot them the minute I left the room.

"It is no different these days. So, I prefer to keep my sessions short, precise and to the point. No frills or fancy words. Keep it simple and talk to the players in a language they understand."

The video sessions are short and specific to errors committed on the field. These video analyses are usually done closer to the match rather than days in advance so that it would remain fresh in their minds.

"No player can sit through an entire 70-minute video recording of a match. I pick out certain segments or specific situations to help the player analyse his mistakes. The same when we do our homework on our opponents. We target specifics, devise a plan and allot individual responsibility. That way, each player is aware of his role in our overall scheme," he said.

During on-field training sessions, he directs the proceedings with authority and woe betide the player who is slack or late to report.

"I like to see energetic players whether in training or a match and of course, punctual. There has to be a sense of purpose," was his assertion.

When asked whether he was being too dominant or over-bearing, pat came the reply.

"No way. But there has to be some discipline at all times and since I am put in charge, I would like to ensure that everything is in order and the way I want them to be."