It's Not Just War

While neither Maoists nor the government believes there is a neutral ground, as observers we would be failing in our own dharma if we let either side stop us in calling for peace. 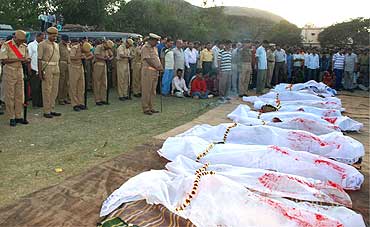 Like many other Indians, I turn to the ancient epics to try and understand a difficult situation. Faced with civil war inside the country -- and after the scale of the Nayagarh incident and the government's response, we can only call it that, rather than a mere 'law and order problem' -- what better place to turn to than the debates around that immortal war, the Mahabharata?. A war fought not just within a kingdom, but between members of the same family. How fortunate or perhaps unfortunate we are, in Irawati Karve's words, that we can "read today a story called Jaya, which was sung three thousand years ago and discover (our)selves in it."

The Gita is sometimes understood as an exegesis for a just war, but as a number of scholars and interpreters have argued, if there is anything the Mahabharata teaches us, it is the futility of war. The Pandavas attained a kingdom that had been totally devastated. As the philosopher Bimal Matilal pointed out in his Epics and Ethics, Krishna's advice to Arjuna in the Gita is not to be taken as a justification for war, but an ad hoc resolution of a moral dilemma. Once Arjuna had gone this far, it would have been pointless for him to turn back. In other words, it is not in the moment of the encounter that the soldier or insurgent can afford to develop moral qualms about fighting. The time for thinking comes later -- as in the regret that has driven some Naga reservists to suicide for their role in the savagery of Salwa Judum -- or much before, when actions are being planned.

And it is the very existence of a moral dilemma -- or rather several of them -- that elevates the Mahabharata to the status it has. It promises no salvation, showing sternly and uncompromisingly that each person is responsible for making their own decisions, and bearing the tragic consequences that follow. In India today, the Maoists' decision to take to arms cannot be abstractly blamed on 'structural violence', nor, on the other hand, can the government escape its responsibility for killing its own citizens through some vague notion of the higher interest of the state. Every citizen killed -- whether a policeman blown up in a landmine or a civilian killed by the police in the midst of a combing operation -- must be accounted for. Every death is mourned by someone, whether guerrilla or soldier or village woman.

Yet, in calling for peace and the possibility of a negotiated settlement between the Maoists and the government, the motive is not simply pacificism. Instead, as Matilal argues, "it is a proposal to talk about politics rather than ethics, about principles of prudence rather than principles of morals", about alternatives, rather than inevitability. Both the Maoists and the government have other alternatives, and the fact that they chose not to exercise them must be seen for the flawed choices that they are.

The Maoists claim, in their response to an open letter by the Independent Citizens Initiative (EPW, January 6 2007) that they were driven to fight since there is not a single instance where the rights of the adivasis were ensured through non-violent and open means. This is a misreading of history. The great adivasi rebellions of the past were open, if not non-violent, and involved the mass of people acting in their villages, upon their own understanding, and not a vanguardist party.

If asked what the adivasis of Kalinganagar or the Narmada valley have received for their peaceful struggles, one could equally well turn the question around and ask what the people of Dantewada or Nayagarh have received for the Maoists' armed struggle. And the answer would be rape and repression. If, as they claim, they "value life and peace as no other party or humanist does", it must be strange love that leads to such suffering for the people they claim to be fighting for.

While the Maoists cannot be blamed for the terror unleashed by the government through Salwa Judum, for which the government alone is legally and morally responsible, they can certainly be blamed for their own acts of violence. How does blowing up policemen, shooting at a Collector, attacking camps and destroying schools and transformers, lead to any change in the system?

The government, on the other hand, talks of the Naxalites as the greatest 'virus' affecting the country, in a language that only implies extermination. As Michael Walzer points out in Just and Unjust Wars, insofar as guerrilla wars are successful only because they enjoy the support of the public, any counterinsurgency strategy that aims to isolate them from the civilians they live among inevitably turns into an anti-social war against civilians. And the end result is the systematic destruction of the very people in whose name the government claims to speak. 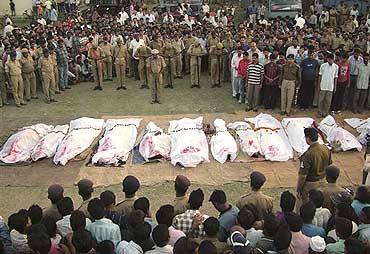 In the government-backed Salwa Judum counterinsurgency campaign in Chhattisgarh, the scorched earth fight to secure its control against the Maoists has resulted in half the district of Dantewada being emptied out, and hundreds, if not thousands, being killed by the Salwa Judum and security forces. In return, hundreds have been killed by the Maoists. A fact-finding team consisting of Shantha Sinha, J.M. Lyngdoh and Venkat Reddy for the National Commission for the Protection of Child Rights in December 2007, noted the 'enormous tragedy' facing the villagers of Dantewada.

They held public hearings at which "every testimony included a narrative of extreme violence committed against them, their families and property, by the Naxalites, Salwa Judum and the security forces. Many people shared accounts of family members being killed and women raped by the Salwa Judum."" While noting that some people had fled to camps because of fear of Naxalites, they add that "Salwa Judum has forced many villagers to move to the camps, and burnt houses, livestock and in some cases standing crops, so that those who stay back in villages have no means of subsistence."

Whose security is being defended here? Force is not the only way to take control of a place, much less of a people. There are other concepts that might work just as well as weapons, if not better -- words like justice, equality and care, manifested in the provision of schooling, healthcare or land rights.

If both must fight, ignoring saner counsel, let me draw their attention to another aspect of the Mahabharat. As Matilal points out, it was indeed a dharmyuddh, but only because both parties were expected to observe certain laws of dharma, or codes of conduct in war. In the present context, a code of conduct must involve ensuring the safety of civilians and desisting from atrocities on the other. Neither side should use minors as soldiers.

The government also has the obligation to play fair, to stop harassing and fabricating evidence against all those who have highlighted violations of the rule of law. While neither contender believes there is a neutral ground, as observers we would be failing in our own dharma if we let either side stop us in calling for peace.

Nandini Sundar is Professor of Sociology at the Delhi School of Economics.