Is Nadal, Then, The Greatest?

Federer is an all-time great, perhaps the greatest of all time; Nadal has a 13-6 career advantage over Federer. Now, someone who can beat such a man five times in seven Grand Slam finals has to be greater -- or at least equally great.... 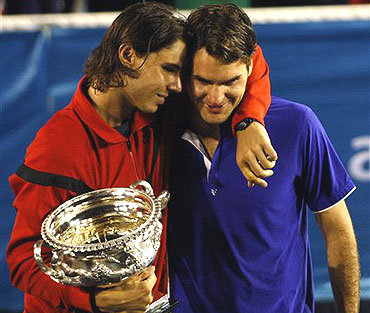 Roger Federer's fallibility when he plays Roger Nadal not only transcends surfaces -- clay, grass, hardcourt -- it also seriously undermines the hitherto credible argument that Federer is the greatest player of all time.

When Federer is at the top of his game, it's a sight for gods; the ebb and flow of his magical shots, the sleight of hand that hides subtle changes in speed and angle, the graceful elegance of his forehand, the sliced backhand that forces his foe to bow, his effortless athleticism -- it seems that tennis can't be played better.

Over the last few years, the notion gained the ground that Rafael Nadal is the man, with his claycourt skills, who stands between Federer and the title of the "greatest". Now, interestingly, despite the largely one-dimensional nature of Nadal's game, it would seem that the reverse also could be true. The argument is this: Federer is an all-time great, perhaps the greatest of all time; Nadal has a 13-6 career advantage over Federer. Now, someone who can beat such a man five times in seven Grand Slam finals has to be greater -- or at least equally great.

Maybe it's not fair to Nadal that those who bestow the title of the "greatest" on a player are aesthetes, as much as they are critics of the game. They're influenced as much by the beauty of a man's game as by his record in Grand Slams. And its beyond doubt that the beauty of Federer's game is greater than that of Nadal.

Nadal's game constitutes muscularity of body and mind -- in sport, these two attributes are rarely gifted in the highest degree to one man. But Nadal has them booth in the highest degree. He's both physically and mentally unbreakable. After that compelling semifinal victory over Fernando Verdasco, he had just one day of rest; Federer had two days to recover after the relatively easy win over Andy Roddick. Yet, in the final, it was Federer who ran out of breath and ideas in the fifth set. He seemed to be alive to the inevitability of his defeat. Such is the strength Nadal possesses, Federer was reduced to tears. After all, how much more can a man do than Federer did and still lose?

How much more Federer can do now? One year ago, he'd lost his Australian Open crown. Then in July, he lost the one title that seemed his by rights, Wimbledon. He was knocked out early at the Olympics. It seemed that the best of Federer was a thing of the past.

Yet, he somehow salvaged his year with the US Open crown. When he beat Juan Martin del Potro in the quarterfinals at the Australian Open, Federer played the kind of game that had seemed to have slipped out of his hand; he was masterful, and scary. The old Federer seemed to have returned.

Yet, on Sunday night, he was a forlorn, tearful man, having lost five matches in a row to Nadal. Federer has shown that it's dangerous to rule him out, so it's unsafe to make a prophecy. We must be content with saying that it'd be interesting to see what he can do now to get back at Nadal. It would seem that the 22-year-old Nadal can only improve -- he's actually improving, he's won Grand Slams on grass and hardcourt for the first time over the last eight months or so. It would be equally safe to say that we've seen the best of Federer, for no one's game can surely get better than he's displayed.

Federer, poor guy, has had his shot at the "greatest" blighted by the presence of the unbending Nadal, adamantine of mind and body. Now, it would seem the reverse is also true -- that Nadal, but for Federer, would already have been talked of as an all-time great, maybe greatest. But his extreme youth means he could yet be that.

It's Federer who's running out of time.