Is India Really Cozying Up To Israel?

Contrary to the rising view, India's recent abstention on a resolution against Israel at the UN is neither unprecedented, nor an indication of a dilution of its stand on Palestine. 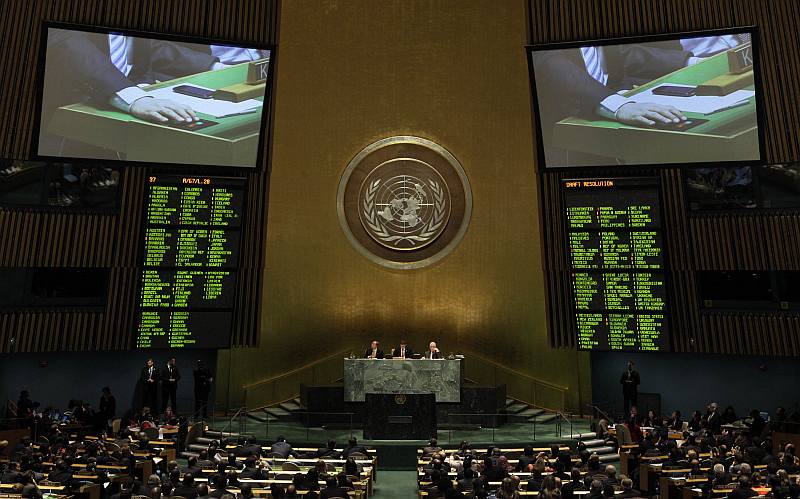 India's decision to stay away from the resolution against Israel at the UN ?stems from its strong opposition to its reference to the International Criminal Court—an outfit whose existence or jurisdiction is not acknowledged by India. By supporting a resolution that allows the ICC to sit in judgement would have created a precedence which could also be used against India in future.

The Israel Prime Minister Binyamin Netanyahu and the Israeli media have all gone to town to highlight and praise India's unprecedented gesture under the Narendra Modi government. However, the first departure from India's stated position on an anti-Israeli resolution had come under Congress Prime Minister, P.V. Narasimha Rao's government.

It was in 1992 when India had voted with several other members to revoke an earlier UN resolution that equated "Zionism with racism," marking a major departure in its stated position on Israel. The stand had opened the door for normalisaation of Indo-Israeli ties and led the two countries to establish full diplomatic relations. Bilateral relations between Delhi and Tel Aviv have steadily grown since that day.

Though the normalisation had begun during Narasimha Rao's time, Indo-Israeli relations really showed an upswing when the NDA government of Atal Bihari Vajpayee came to power in 1998. India's keenness to look for allies in the United States in the wake of its nuclear tests led it to strengthen ties with Tel Aviv and by extension, with the Jewish lobby in America. This period not only witnessed a series of high-level visits from India to Israel from the BJP government but also saw the building of a broad political consensus to expand relations with the Israeli leadership. Among other politicians, veteran Marxist leader and then West Bengal chief minister, Jyoti Basu had also travelled to Israel to engage with the government in Tel Aviv.

Subsequent Indian governments have all pursued policies to deepen and strengthen Indo-Israeli relations further. However, while doing so all of them had taken care to ensure that growing ties between Delhi and Tel Aviv was not being done at the cost of the Palestinians.

The BJP-led Narendra Modi government too is keen to deepen and strengthen Indo-Israel relations further. There are suggestions that Modi may become the first Indian Prime Minister to visit Israel in the near future.

But it would be perhaps too early to suggest that cozying up to Israel was being done by diluting India's stand on Palestine. On the contrary, the Modi government had joined the other BRICS members to demand a probe against Israel for its alleged human rights violation during its military operations against Palestinian civilians—leading to the death of several hundred children—in 2014. There is nothing to suggest yet that the Modi government was shifting from this stated position.

How does one, then explain the Indian abstention on a Palestine-initiated resolution against Israel at the UN human Rights Commission?

The Indian stand will have to be seen in the context of Delhi's strong opposition to the International Criminal Court. The establishment of ICC under the Rome Statute was opposed by India on several counts. But primarily the Indian opposition stemmed from the explicit attempt of the ICC to probe alleged human rights violation in countries on the determination of the five permanent members of the UN Security Council. This in effect meant that while the P-5, if and when they agreed, could institute such investigations of human rights violation in other countries, if ever there was a demand to conduct similar investigations in their country, the P-5 members could scuttle it since they had the power to veto any such move.

In the past India had been under constant pressure from the West, particularly the Americans and the British, for its alleged human rights violation in Kashmir. Though that issue has now been put on the backburner there is no guarantee that in future it will not be brought back by these countries to harass India. If India were to support the resolution against Israel, it would have created a precedence acknowledging the jurisdiction of the ICC to probe an investigation on human rights violation—something that could also have been used against it in future.

In the coming days, especially in the run-up to the Indian Prime Minister's visit to Israel one may see a more nuanced Indian stand on the West Asia crisis. But it will be difficult to expect the Modi government to junk India's decade-old stand on Palestine to cozy up to Israel.