When fat know-nothings inject a long snigger into "oh, so you're going to see some installation, huh?" it tends to raise my avant-gardist hackles. "Yes, why? Do you mind?" I reply.

Now, see, the thing is I actually like that branch of art production that goes under the name of installations, and I like weird video art too, having occasionally been accused of making some myself. So, when fat know-nothings inject a long snigger into "oh, so you’re going to see some installation, huh?" it tends to raise my avant-gardist hackles. "Yes, why? Do you mind?" I reply, "Does everyone have to limit their enjoyment of art to the embroidery on their old aunty’s tea cosy like you? Or reproductions of some nice-nice paintings by Rubens or Renoir on coasters? Huh?" 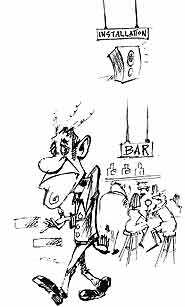 It’s always good to be able to put up a front, but the fact is, driving to Apeejay’s art spaceship out in Mehrauli during the evening rush hour does tend to make you less sympathetic to the intentions of whichever zany, deep or just plain follow-the-leader artist whose work you’re going to see. As you go in past the security guards you could find yourself paused right behind a socialite. She may know as much about the work of Nam June Paik or Vito Acconci as the fat, JNU/Jamia prof a.k.a. The Sneerer you’ve just left behind, but at least she is on that list of the Dilli Malairati who Ms Pooja Sood and Ms Priti Paul are trying to educate out of the morass of MF Husain canvasses.

A quick overtake past the woman’s Gucci handbag and you are in the courtyard, about to come f2f with Art. You look around, find a friend and she tersely fills you in on the basics: 1. the bar is not yet open, 2. there are two busloads of human sponge in from around Mandi House who have surrounded the booze counter, 3. best trick seems to be to go look at the work first.

So in you go to the first gallery where there is a large screen with a slow zoom-in into a grey and featureless sky. Right. Next, there is a dark room in which a set of speakers make modern, humming sounds. Third piece is a large hall in unfinished concrete. Just as you begin to get into the subtle textures of the barely hidden sarias etc, you see a small, bald English bloke making like Harry Potter over a bank of laptops and amplifiers, more modern sounds emerge from some very nice speakers. These merge with a cacophony of truck horns and grunting diesel engines and you think, "Wow, that’s so connected to my reality!" till you realise that it is your reality on the highway outside sending in its music through the large plate-glass windows.

Downstairs, you and friend spot a chink in the throng around the booze. You order and the waiter starts to pour your drink. He is halfway through when a German voice says. "Vun bier pleeze." The waiter leaves your drink half-poured and rushes off. The two of you give up and head back to the city, a long, static shot of a truck exhaust spewing smoke playing before your eyes.

This piece appeared in the October issue of Delhi City Limits.