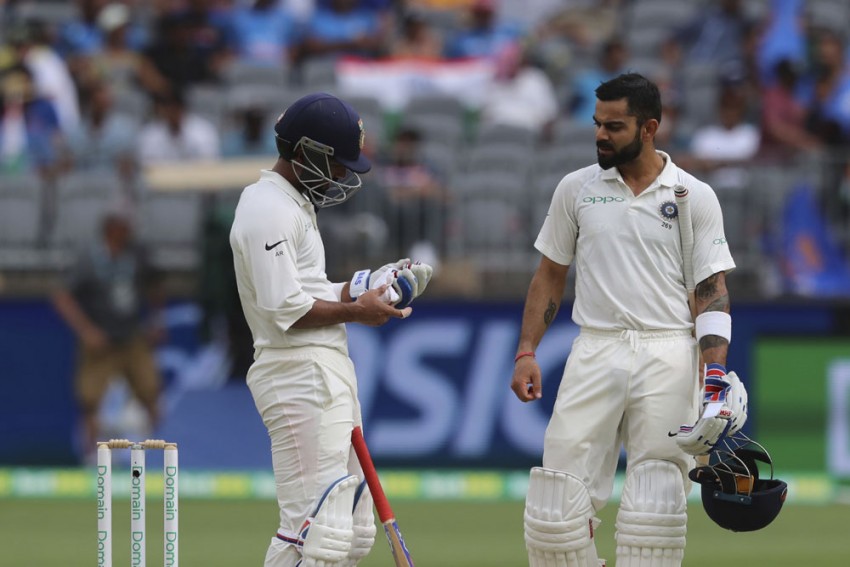 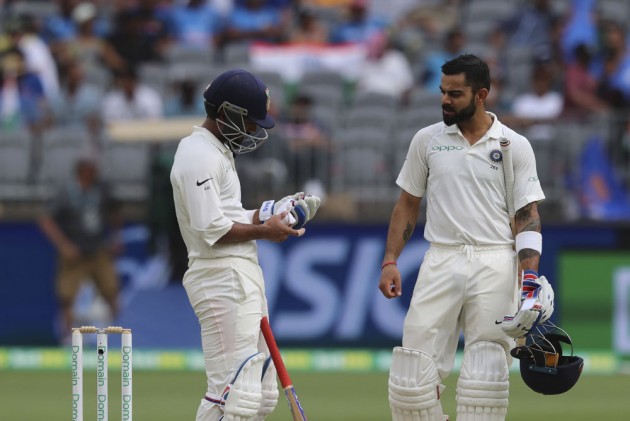 Skipper Virat Kohli and his deputy Ajinkya Rahane posted an unbeaten 90-run stand for the fourth wicket as India inch closer to Australia's first innings total of 326 on Day 2 of the second Test at Perth Saturday.

India bowled out Australia in the morning, but lost opener Murali Vijay (0) at the stroke of Lunch. KL Rahul (2) soon joined his opening partner in the hut leaving India precariously at 8/2 inside the first six overs.

Both the openers were clean bowled, by Mitchell Starc and Josh Hazlewood respectively.

But Kohli and Cheteshwar Pujara rebuilt the Indian innings with a 74-run third wicket stand. But Pujara, who won the man of the match in the first Test of the Border-Gavaskar Trophy series at Adelaide, was dismissed by Starc in the 39th over.

Then the arrival Ajinkya Rahane changed the course of the day's play.

At the close of play, India were 172/3 after 69 overs, still trailing Australia by 154 runs. Kohli and Rahane were batting on 82 and 51 respectively.

Australia's tail wagged to add 49 runs to their overnight total to finish at 326.

In the final session of play on Saturday, Kohli and Pujara (24) batted in much the same manner as they did in the previous session. Their pace of scoring was slow, but they batted with assurance until Mitchell Starc (2-42) provided the breakthrough.

It came seven overs after the Tea break as Pujara glanced a delivery down leg only to be caught behind, as his 74-run partnership with Kohli for the third wicket came to an end.

Rahane then joined Kohli in the middle, and initially, he faced some issues getting used to the pace and bounce off the pitch. Unlike Pujara though, he took the bowling head on and counter-attacked with two boundaries and a six.

It set the pace for his partnership with Kohli, who was solid at the other end and grinding down the Australian attack. The Indian skipper reached his 20th Test half-century off 109 balls as India crossed 100 in the 43rd over.

Their 50-partnership came off 106 balls as the duo settled down to see off the last hour before stumps. They cut down on the risks even more, only occasionally coming forth to play their shots.

In doing so, Rahane reached his 17th Test half-century before the end of play as the two batsmen were sure in their shot selection and avoided any further damage to the Indian innings.

Earlier, Kohli and Pujara had seen India to 70 for two at tea. Post lunch, India were immediately under the pump as Josh Hazlewood (1-50) knocked over KL Rahul (2) in the third over after resumption of play.

Rahul was in two minds about how to play a full delivery aimed on the off-stump and was beaten all ends up as the ball destroyed his stumps.

It brought Kohli and Pujara together at the crease, and the duo concentrated on defence in order to push back the Australian attack.

The session turned out to be an intense battle with Nathan Lyon (0-34) keeping both batsmen under wraps as they tried not to play too many strokes against the off-spinner.

At the other end, Kohli also contended with Hazlewood who bowled an extended spell. The star batsman stood outside the crease and moved early on his front foot to deny any chance of a repeat with what happened at Rahul's dismissal.

They made slow progress, adding 37 runs in the first hour of play after lunch, and their 50-partnership came up in 135 balls. India had crossed 50 in the 22nd over.

There were a few more shots towards the end of this session, but overall Australia kept a tight leash on proceedings with both set batsmen deciding not to counterpunch.

Earlier, India were placed at six one at lunch with Starc bowling Murali Vijay for a 12-ball duck. This was after Ishant Sharma's 4-41 helped the visitors bowl Australia out for 326 runs in their first innings.

Starting from overnight 277/6, Australia added 49 runs to their total for the loss of four wickets. Tim Paine (38) and Pat Cummins (19) frustrated Indian bowling and enhanced their eighth wicket partnership to 59 runs.

In doing so, they took Australia past 300 in the 100th over. For their part, India were guilty of bowling too short again and there weren’t enough full deliveries attacking the stumps or making batsmen play.

India were content with keeping a lid on the scoring as only 29 runs came in the first hour of play. They started the day's proceedings with Ishant and Mohammed Shami (0-80), with Umesh Yadav (2-78) starting as first change.

Jasprit Bumrah (2-53), who was India's standout bowler on day one, was the fourth to bowl in an inexplicable tactic from the skipper.

Finally, Yadav got the breakthrough with an over of full deliveries, knocking off Cummin's off-stump in the 105th. Two balls later, Bumrah trapped Paine lbw and the decision stayed despite a DRS review from the batsman.

Nathan Lyon (9 not out) stayed unbeaten for the third innings in a row as he added quick-fire 16 runs with Mitchell Starc to push Australia to a healthy total on a tough wicket.

Ishant then finished off things with two wickets in two balls, with Starc and Josh Hazlewood (0) caught behind with some acrobatic help from Rishabh Pant.