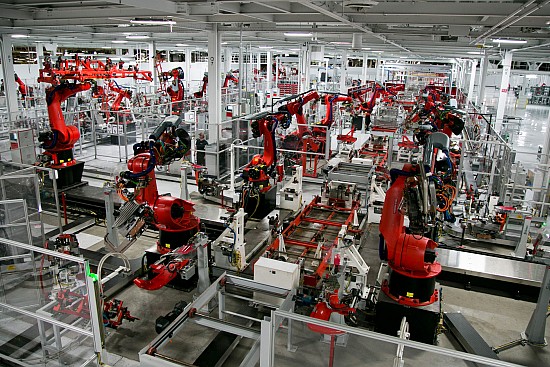 One night shift, a robot on the factory floor of German giant Volkswagen caught hold of a technician and crushed him under a moving steel sheet. This had happened on June 29 this year. Nearer home in Gurgaon, Ramji Lal, 24, was killed by a robot on a private firm's shop floor on August 12, 2015. The symbolism of the two incidents is too sharp to be overlooked. There are too many warning signals from experts about the human-created intelligent machines rapidly replacing workers in almost every field.

?The ?debate is now no more about the inevitability of massive job loss. It is more about how to minimise the consequences of an impending catastrophe and thus save capitalism from capitalism. Until recently, skeptics had dismissed the automation-induced job loss as another Luddite fallacy. Now it is increasingly realised that what is happening is not just automobiles replacing horse carriages or computers robbing clerical and accounts jobs. It is an unprecedented situation – a deadly combination of new generation robots, the 'Internet of Things' and 'machine intelligence' working together to take over human role in almost an entire range of activities.

Unlike earlier disruptions, the new mechanical systems now in their advanced stages of introduction, are not expected to generate new jobs either in their own domain or downstream. Instead they simply rob the existing jobs. The scenario looks really scary. Pessimists quote a recent Oxford study covering about 700 occupations. It found that over 47 per cent of jobs will be swallowed by automation in the next eight to ten years. These cover transportation, administration, accounting, logistics and education. Look at the predictions by the prophets of doom, all of whom authentic professionals.

An early predictor Futurist Thomas Frey fears that 2 billion jobs or half of world's total will be 'stolen' by new generation machines within a decade and half. Three years back Federic Pistano after studying the laboratory trends had warned of unprecedented massive job disruption. Technology research firm Gartner foresees at least one-third job loss in a decade by smart machines, new generation deadly software and robots together. Look at the production line of the Gurgoan factory where Ramji Lal met his end. It employs 63 human workers and as many as 39 robots on its welding floor. Thus robotisation is a visible trend on our factory floors.

Tech entrepreneur Vivek Wadhwa writing in an Indian economic daily (the Economic Times) visualises a dreadful scenario where a miniscule tech elite with the help of intelligent machines will undertake much of the human activities in future. Jeffrey Sachs (Columbia University), Seth Bensell, Laurence Kotlikoff and Guielermo Lagarda (Bonston University) have all predicted massive retrenchment of every kind of workers.

Already, all major IT companies operating in India have begun investing heavily in 'Internet of Things' (IoT) to create a deadly software that will take care of all software that otherwise will do human duties. Wipro is building computing systems that will mimic human decision making abilities. They can understand and respond to human thinking. A computing system 'Amelia' has the potential to perform all commoditised tasks at a fraction of cost. Indian IT giants are tying up with foreign giants for innovation. IBM will invest 3 billion dollars to develop 'IoT' system. Consequences are already being felt. In Feb last, Infosys announced it will add only 30,000 hands next financial year. Some estimate that their net hiring will actually be just 3,000.

The immediate victims will be those who do repetitive tasks in software. Already, benching is becoming a common feature in IT centres where experienced hands impatiently wait for new projects to arrive. Clearly, Indian IT's traditional 'pyramid' model is under serious challenge. A recent McKinsey study found that so far IT firms with every 100 billion dollar profit have been adding 3 billion workers. This will now come down to 1 million workers for the same profit. That is how monster machines eat into humans' jobs. Or is it the virtual beginning of much scared jobless growth? IT experts believe so. According to them, almost half of those who are able to survive the IT job loss, will have to acquire specialised training if they have to remain in profession. In other words, Bangalore is set to become victim to a new kind of 'bangaloring'.

Robotic role in many auto factories is already as high as 30 per cent. Labs in US, Germany, China and Japan are working on a new generation of robots. Google is a pioneer in driverless vehicles. Many expect app-based aggregators to replace millions of drivers by the end of the decade. These are claimed to be safer than human drivers, i.e., in GPS areas. Wadhwa anticipates replacement of humans by machines in paralegal, pharmaceuticals, finance and administration. New robots, IoT and 3-d prints are bound to influence every sphere of human activity. There has already been a reverse trend in the flight of capital to US from markets with cheap labour. In US they anticipate a return of factories on a big scale as cheap labour will cease to be a factor. The Chinese have joined the automation club and are developing their parallel machines.

Such prophecies of gloom have evoked instant responses from diverse sections. Traditionalists gleefully quote scriptures like Bhagawat purana and its bhashyams to illustrate the kaliyuga horrors. Marxist scholars say that the old man in his grave in London's Highgate cemetery will have the last laugh after all. In left-wing discourses, 'return' of the Marx has become a favourite theme. If the current fears of permanent job loss prove true, this is going to be the worst-ever capitalist crisis visualised in mid-19th century by Karl Marx. Efficiency, competitive edge and profit are essentials of market survival. Market weighs citizens in two different roles: as a worker and consumer. The world economy had undergone severe bouts of recession whenever there was massive job loss. Permanent job loss, if really happens, will be an entirely new kind of challenge.

This is what makes the pessimists think of a new kind of global consensus for solutions like redistribution of wage income and three-day week. Even free thinkers who reject the customary Marxian theories believe that some kind of redistribution of wealth will be inevitable if the expected catastrophe really takes place. Some are talking about things like universal basic income for individuals and 'rationing' of jobs like state-wise commitment on greenhouse regulation. True, at the moment all this may be in realm of speculation. But in India the reform economists are behaving as if nothing is happening round the word.

No Full Stops For Aadhar