The Gujarat Police announced on August 16, 2008, the identification and arrests of 10 activists who they claim formed the hard core of a larger group of SIMI activists, who had planned and carried out the blasts in Ahmedabad, under the name of Indian 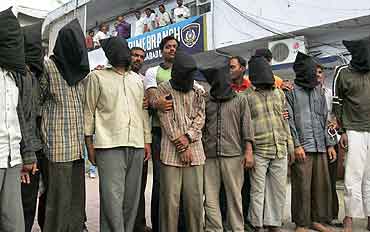 The Gujarat Police announced on August 16, 2008, the identification and arrests of 10 activists of the Students Islamic Movement of India (SIMI) in connection with the serial blasts in Ahmedabad on July 26, 2008. Nine of the arrests were made in Ahmedabad and Vadodara in Gujarat and the tenth arrest of their leader Mufti Abu Bashir was made with the co-operation of the Uttar Pradesh police in Azamgarh in UP.

According to details given by a team of senior Gujarat police officers at a special press conference, the arrested persons formed the hard core of a larger group of SIMI activists, who had planned and carried out the blasts in Ahmedabad, under the name of Indian Mujahideen. They also said that while they have definitively established the involvement of these persons and their associates not yet arrested in the blasts in Gujarat, they have some indications that some of these persons might have also been involved in the serial blasts of May in Jaipur and in the blasts of November, 2007, in UP.

Further investigation is in progress. All the persons arrested so far and the suspects not yet arrested are Indians. All the arrested persons are in their 20s.A collation of available details is given below:

Abdul Rashid also known as Mufti Abu Bashir Ilahi, aged 26
Believed by the Police to be the mastermind of the serial blasts in Ahmedabad on July 26, 2008, and the planned, but failed blasts in Surat the next day. Studied Arabic in the Deoband seminary in Uttar Pradesh. Comes from a lower middle class family of Azamgarh (village Beenapara) in Uttar Pradesh. Father, a paralytic, is unemployed. Mother a housewife. Family dependent on his earnings as a teacher of the Arabic language in a madrasa in Hyderabad called the Jamait Ul Sheikh Al Maududi located at Pahadisharif in Hyderabad. The madrasa had been started by another native of Azamgarh called Maulana Abdul Aleem Islahi.

Abu Bashir has four brothers and one sister. Two of his brothers are working in Delhi and Mumbai. The remaining two brothers and sister are studying in a madrasa in Azamgarh. Abu Bashir worked for two years in the Hyderabad madrasa till January 2007. According to the Hyderabad police, he left the madrasa for Azamgarh in January 2007. According to his father, he returned to his village only about a month ago saying the madrasa was closed for vacation.

For nearly 18 months, he was neither in the madrasa nor in his village. Some of this period between March 2008 and July 2008, he had spent in Ahmedabad. According to the Gujarat Police, he was present in Ahmedabad on the day of the blasts.It is not yet known where he was from January, 2007, to March 2008, when he allegedly took over as the head of the SIMI network after the March 2008 arrest of Safdar Nagori, the General Secretary of the SIMI, and his brother Karimuddin by the Police of Indore in Madhya Pradesh.

Bashir came into contact with the SIMI when he was teaching in the madrasa in Hyderabad and became its active member. Maulana Abdul Aleem Islahi is an activist and known sympathiser of the SIMI. His son Mohtasin Billa was also in the SIMI. While examining the cell phone records of Ahmedabad city in the past few months before the blasts, the Crime Branch of the Gujarat Police identified five numbers which were receiving only incoming calls made from public call offices located mostly at a place called Juhapura in Ahmedabad.

Investigation indicated that during his stay in Ahmedabad Abu Bashir had purchased five SIM cards in the names of local residents. Zahid Sheikh was making the calls to Abu Bashir at these numbers. These numbers went silent after the blasts. Abu Bashir and Abdul Subban Quereshi were staying in a rented house at a place called Vatva in Ahmedabad. This house had been hired with the assistance of Zahid Shaikh and Sajid Mansuri.

Imran Ibrahim Sheikh, aged 23
Did a course in human rights and journalism in the MS University of Vadodara. Arrested in Vadodara. Attended training camps in Kerala and Pavagadh near Vadodara under an assumed name. The Police zeroed in on him after a scrutiny of his mobile phone records.

During his interrogation, he denied any role in the blasts and mentioned the name of Zahid Sheikh. Imran Sheikh and Sajid Mansuri had visited Jaipur on May 13, 2008, when the serial blasts there had taken place. The improvised explosive devices (IEDs) used in Ahmedabad and Surat were assembled at three different places--in the house at Vatva in Ahmedabad in which Abu Bashir was staying, in Imran Sheikh's house in Vadodara and in another house in Kalpur in Ahmedabad. It is not known who was staying in the Kalpur house.

Zahid Sheikh, a resident of Juhapura in Ahmedabad
The interrogation of Imran Sheikh led to him. He allegedly confessed that he had planted bombs on cycles in Ahemdabad. He named at least three people who were involved in the purchase of the bicycles and delivery of the IEDs. Zahid Sheikh was under surveillance by the Ahmedabad police even before the blasts. He had also attended the training camps in Kerala and Gujarat under an assumed name. He had provided local logistics support for a team of nine -- five from Madhya Pradesh, two from Maharashtra and two from Karnataka -- which had come to Ahmedabad. The team held meetings in the Bapunagar area of Ahmedabad in April, another one in a different city in May and the final one on July 20 at Zahid's residence. Zahid's confession led to the arrest of Yunus Mansuri, Shanshuddin Sheikh, Arif Kadri, Gyasuddin from Ahmedabad and Imran, Usman Agarbattiwala, Iqbal Sheikh and Sajid Mansuri from Vadodara.

Usman Agarbattiwala, aged 24
A B.Com graduate from MS University of Vadodara. Attended training camps in Kerala and Pavagadh near Vadodara under an assumed name. His laptop was allegedly used for programming the timer chips for the IEDs planted in Surat, which failed to explode.

Sajid Mansuri, a former zonal secretary of the SIMI in Gujarat
Sajid Mansuri, who was absconding since 2001, was arrested from Bharuch after the blasts.

Abdul Subban Qureshi
An explosive expert who holds a diploma in electronic engineering. He allegedly procured ammonium nitrate and timers for the Ahmedabad operation and had them stored in a safe house in Bharuch, He had attended the meetings of the SIMI to plan the serial blasts. The arrested suspects have claimed that it was Abdul Subban Qureshi who drafted the three e-mails claiming responsibility for the blasts of November,2007, in UP, May in Jaipur and July in Ahmedabad on behalf of  "Indian Mujahideen". He forwarded the drafts to Mufti Bashir. Qureshi is absconding.

Adnan also known as Hafiz Mullah
A young computer engineer and a prominent SIMI organiser for South India. He was arrested along with some other SIMI leaders in Indore in March 2008. He had named Abu Bashir as responsible for SIMI activities in Gujarat.

Kamaruddin Nagori, brother of Safdar Nagori, was in charge of organising training camps
He was assisted by Adnan, Shibly Peedical Abdul and his brother Shaduli.

The first camp was in Karnataka between April and September, 2007, the second in Kerala in October-November,2007, the third in Madhya Pradesh in December, 2007, and the fourth in Gujarat in January 2008.

The plans for the series of blasts in different cities were drawn up during the training camp in the jungles of Waghamon near Alua in Kerala where 40 recruits from different states were put through a commando course. This camp was addressed by both Safdar Nagori and his brother. This camp was followed by the blasts in three cities of UP in November, 2007.

The plan for the blasts in Gujarat was drawn up at the Gujarat training camp held in Pavagadh in the Vadodara area. Many of those arrested by the Gujarat Police after the blasts had attended this camp.

After the arrest of the Nagori brothers and Adnan by the Indore Police, Abu Bashir, assisted by Abdul Subban Quereshi and one Kayamuddin of Vadodara, took over the responsibility for organising the reprisal attacks planned in Gujarat. Initially, they though of either a plane hijacking or a kidnapping to demand the release of those arrested in Indore. They gave up these ideas and decided on the blasts.

Others arrested by the Gujarat Police are Yunus Mansuri, Shamsuddin Sheikh, Arif Kadri, Gyasuddin, and Iqbal Sheikh . Their particulars are not available.