Indian Economy In A Tailspin

It is not just about the authenticity or otherwise of the CSO's estimates, but the bigger picture on the economic front is pretty gloomy. 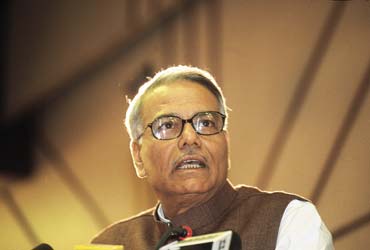 How bad is the current state of the Indian economy? From all indications, things are pretty lousy. The half-hearted attempts made by the government to paint a brighter-than-actual picture of the economic situation seem to have miserably flopped.

If anything, moves to project an optimistic future of the economy are backfiring on the country's financial authorities: negative sentiments seem to be feeding on one another to create a downward spiral of pessimistic expectations.

It has been said that there are three kinds of lies: lies, damn lies and statistics. The discipline of crunching numbers is often maligned. In a light-hearted tone, statistics is sometimes compared to a woman in a bikini: what is revealed, it is said, is suggestive; what is concealed, vital. Still, one can hardly talk about the economy without mentioning numbers.

Take the case of the latest figures released by the Central Statistical Organisation on Friday June 29. The data compiled by the CSO indicates that India's gross domestic product (GDP) grew by 5.2 per cent in the financial year that ended on March 31, 2001. The GDP growth rate during the previous year was higher to the extent of 1.2 per cent, or 6.4 per cent.

It was only four months earlier, on February 28, that Finance Minister Yashwant Sinha had presented his Union Budget for 2001-02. During his speech in Parliament on that occasion, he had made the following claim: "Overall economic growth this year is expected to be about six per cent despite a series of unexpected setbacks."

Within days of its presentation, Sinha's "dream" budget turned out to be a nightmare, at least for the country's stockmarkets that collapsed like a pack of cards in the midst of a major financial scandal reminiscent of a similar scam that had broken out nine years earlier. It now turns out that the Finance Minister had painted an unrealistically rosy picture of the economy.

How does the CSO get its figures so wrong? After all, a difference of 0.8 per cent of the GDP of a large country like India is not exactly small change. If one assumes the national income to be in the region of Rs 2,000,000 crore (or the figure two followed by thirteen zeros), one per cent of GDP works out to Rs 20,000 crore. In other words, how did the CSO get its figures wrong by as much as Rs 16,000 crore?

Sinha was asked this question after he had inaugurated an insurance scheme for landless workers a day after the CSO figures were released. The Finance Minister said he was disappointed with what had transpired. "My own estimation was that because of a sharp reduction in agricultural production, the growth rate could go below six per cent. However, I had not anticipated the growth rate to be as low as 5.2 per cent," he was quoted as saying.

Sinha added that though he was not casting any aspersions on the CSO, during the last five years, the apex statistical organisation in the country had revised its GDP growth estimates upwards in all but one year, that is, 1997-98. That year, the CSO's "quick" estimates had suggested a growth rate of 5 per cent against an actual growth rate of 4.8 per cent. In all the other four years, the CSO had scaled up its "quick" estimates.

The Finance Minister needs to go into this discrepancy a little more deeply. On what basis does the CSO releases its "quick" estimates? After what kind of a time lag does it revise these figures to first become "advance" estimates and then "provisional" estimates? And why does it often take the CSO as long as a year or so to finally "finalise" its figures?

A large number of detailed studies have been conducted by erudite scholars -- statisticians and economists -- on why the government is unable to collect accurate and reliable statistics and why it is unable to publish these on time. Nevertheless, a feeling persists that much remains to be done to streamline the CSO's operations.

Moving away from the issue of the authenticity of the CSO's estimates, the fact of the matter is that the bigger picture on the economic front is pretty gloomy. When independent think tanks like the Mumbai-based Centre for Monitoring Indian Economy headed by Mahesh Vyas had questioned the government's GDP estimates, they had been chided for acting like prophets of doom. Yet, few care to recall such views when the government itself authenticates what had been predicted a few months earlier.

Sinha remarked that he was not commenting either way whether or not the CSO would further change its figures when these are finalised. At the same time, the Finance Minister stated: ".but the fact that the Indian economy had slowed down was known. It is not a revelation of the truth."

This is neither here nor there. Government spokespersons, including Sinha, are paid to be optimistic. But their optimism needs to be tempered by a certain degree of realism. What has become amply evident now is that the slowdown in the economy had started some time ago and became obvious from around the beginning of this calendar year (at a time when the government was denying that anything of the sort was taking place).

According to the CSO, whereas the country's GDP grew by six per cent on an average between April and October last year, during the last quarter of 2000, the growth rate fell to five per cent. The growth rate slumped further to 3.8 per cent in the first three months of the current calendar year.

One significant aspect of the figures is that these depict a slowdown in each and every sector of the economy. The primary sector, "agriculture, forestry and fishing" grew by a negligible 0.2 per cent in 2000-01 against 0.7 per cent in 1999-2000. The manufacturing sector grew by 5.6 per cent against 6.8 per cent in the previous year.

The story is repeated in other sectors of the economy. The "trade, hotels, transport and communications" sector expanded by 6.9 per cent last fiscal year against 8 per cent in 1999-2000. The fall in the growth rate of the construction sector was sharper: from 8.1 per cent to 5.5 per cent. Even more steep was the decline in the growth rate of "community, social and personal services": from 11.8 per cent to 7.8 per cent, or a fall of four per cent.

As far the infrastructure is concerned, the "electricity, gas and water supply" sector grew by 4.7 per cent during 2000-01 compared to 5.2 per cent in the year before. The growth rate of the "financing, insurance, real estate and business services" segment of the economy too shrunk by one per cent, from 10.1 per cent to 9.1 per cent.

What does all this mean for the growth rate of each Indian's income? Despite the fact that these figures conceal the manner in which income has been distributed among different sections of the population, the rate of growth of per capita income (at constant 1993-94 prices) fell from 4.8 per cent to 3.5 per cent. In absolute terms, per capita income in 2000-01 stood at Rs 10,561 against the "quick" estimate of Rs 10,204 in the previous year.

The jumble of statistics cited may appear confusing to some. But to place these statistics in some kind of a historical perspective, one has to compare them with figures indicating what had taken place in the economy during the two decades before and after the process of economic liberalisation began. The controversy relatesto whether the year 1991-92 should be placed in the pre-liberalisation era or the post-liberalisation phase because the economy had contracted during that particular year.

To be charitable to the government, let us compare the macro-economic statistics of the eleven years between 1980-81 and 1990-91 with the eight-year period between 1992-93 and 2000-01 (before the CSO revised its figures). Even if such a comparison is made -- which is very favourable to the government - the picture is not at all bright.

The average annual rate of growth of GDP had gone up from 5.4 per cent during the first period to 6.4 per cent in the next period. The agriculture sector's growth rate slowed down from 3.9 per cent to 3.3 per cent. The growth rate of industry rose only marginally from 6.3 per cent to 6.5 per cent, while the relevant figures for the services sector went up impressively from 6.4 per cent to 8.2 per cent. (These figures are taken from the last official Economic Survey for 2000-01 put out by the Ministry of Finance just before the presentation of the Union Budget.)

So is there anything to crow about as far as the performance of the Indian economy is concerned? The short answer is as follows: the services sector has expanded rapidly (this sector currently accounts for nearly half the country's GDP) but the growth rate of industrial production has been lacklustre while the farm sector has done quite poorly.

What makes things worse is the bad news on the employment front. There is no indication that job opportunities are going to go up. On the contrary, the latest estimate of the Ministry of Labour is that the total number of jobs in the organised sector of industry actually shrunk by 0.15 per cent during 2000 after having gone up by a niggardly 0.04 per cent during 1999. This is reportedly the first time in a decade that employment in organised industry has fallen.

The latest CSO figures make an already-bad picture appear worse. For one, the fiscal deficit as a percentage of GDP is up from 5.2 per cent assumed four months ago to almost 5.8 per cent, the highest level in the last seven years. This makes the government's avowed intention of bringing down the fiscal deficit to around three or four per cent of GDP over the next five years appear an almost impossible goal.

Finance Minister Sinha has claimed the government would be stepping up public spending to revive the economy. Among the plans on the anvil is to increase expenditure on Prime Minister Atal Behari Vajpayee's favourite highways building scheme. He said he would be meeting his ministerial colleagues, captains of industry as well as heads of banks and financial institutions in the coming weeks "to discuss measures to increase public expenditure".

One important factor that is working in favour of the government is that rates of inflation are still low, below 5.5 per cent per year as measured by the wholesale price index. This is a major plus point. If, however, the government attempts adopting Keynesian techniques to pump up the economy by borrowing heavily to finance public expenditure programmes, such a strategy could stoke the fires of inflation. This, in turn, would be bad news for the National Democratic Alliance government at a time when the country's most populous state, Uttar Pradesh, prepares for elections.

Sinha says "it is ultimately a question of generating demand in the economy". He is hopeful that the reduction in interest rates on contractual savings schemes would "act as an incentive for growth". The Finance Minister has no choice but to put up a brave front. It is to be hoped that he is not being unrealistic. One wishes him lots of good luck. He certainly needs it.

(The author is Director, School of Convergence @ International Management Institute and anchor of the "India Talks" programme broadcast on the CNBC India television channel.)