Here's how India chased down West Indies' 322 runs with relative eases thanks to Kohli and Rohit's at Barsapara Cricket Stadium, Guwahati. Windies may not recover from this knock-out blow. 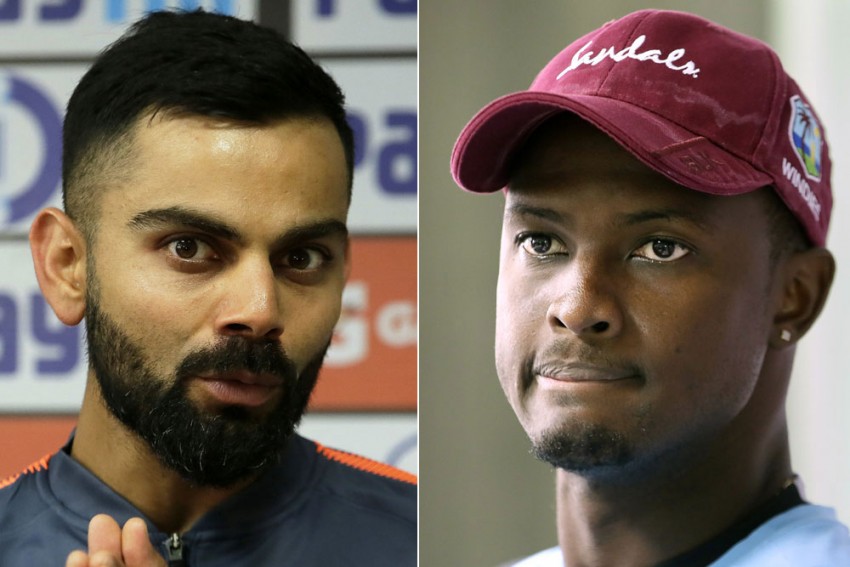 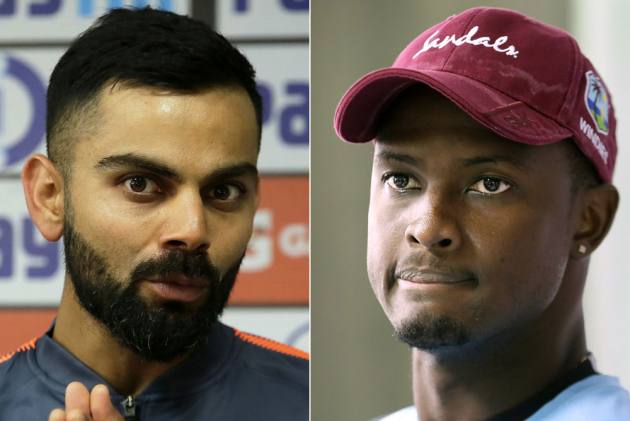 India made a mockery of the West Indies' 323-run target by winning the first ODI match with 47 balls to spare at Guwahati on Sunday. Skipper Virat Kohli and his deputy Rohit Sharma hit hundreds to showcase the might of Indian batting order in the eight-wicket win.

After losing opener Shikhar Dhawan in the second over, Kohli joined Rohit in the centre, then the duo stitched together a 246-run second-wicket stand to close the doors to the Windies. Kohli took the mettle of attacking the visitors, but once he was gone, Rohit assumed the role to sheer perfection.

Earlier, Kohli won the toss and elected to bowl first at Barsapara Cricket Stadium. India handed ODI cap to fast-rising wicketkeeper Rishabh Pant, but the youngster had very little to do except fetching the cherry from odd boundaries during the Windies innings.

After a cautious start, Windies rode on Shimron Hetmyer's hundred to post a challenging total of 322/8. Kieran Powell (51 off 39 balls), Shai Hope (32 off 51) and skipper Jason Holder (38 off 42) contributed to the Windies cause.

For India, Yuzvendra Chahal took three wickets, while Ravindra Jadeja and Mohammed Shami claimed a brace each. Shami was, however, the most expensive of the lot, conceding 81 runs in his comeback match. This is an Indian record against the Windies.

Rohit Sharma hit the winning runs, a six off the first ball of the 43rd over, bowled by debutant Hemraj. India won the match by eight wickets with as many as 47 balls to spare.

Rohit hit three fours and a six in five deliveries to wrap up the match. He remained unbeaten on 152 off 117 balls with the help of 15 fours and eight sixes. In the process, he also went past Sachin Tendulkar as the player with most 150+ scores in ODIs. He has six, to Tendulkar's five.

The contest is being reduced to a farce. Rohit Sharma took over the punisher's role after the departure of Virat Kohli. He and Ambati Rayudu have added 47 runs from 43 balls as India scored 36 runs in the last five overs.

In the 33rd over, Kohli became the second Indian wicket to fall. Stumped by Shai Hope off the bowling off Devendra Bishoo. And with that, a 246-run second-wicket stand was also broken.

Now, it's turning into a personal duel between Virat Kohli and Rohit Sharma. Both the players have hit hundreds, 36th ODI and 60th international for Kohli, and 20th ODI ton for Rohit.

He and Rohit Sharma have added 238 runs in 182 balls, with 62 of those coming in the last five overs.

Rohit Sharma has joined Virat Kohli is punishing the Windies bowlers. The opener reached his 37th ODI fifty in the 22nd over, two balls after hitting Devendra Bishoo for back-to-back sixes.

He and Kohli have added 158 runs in 140 balls as India inched closer to the target. This is India's highest second-wicket stand against the Windies in ODIs, surpassing 140 by Virender Sehwag and Suresh Raina in Indore, 2011.

A 111-run second wicket stand between Virat Kohli and Rohit Sharma seemed to have flattened the Windies in Guwahati. Kohli is 20 runs from his 60 international hundred.

Rohit is batting sensible, giving as many balls to the skipper.

Virat Kohli is in supreme touch. Reached his 49th ODI fifty with a four, from 35 balls. He also became the first captain to score 2000+ international runs in successive years.

After the fall of Shikhar Dhawan in the second over, Rohit Sharma and Virat Kohli have steadied the Indian inning.

Devendra Bishoo and Kemar Roach added 44 runs for the ninth wicket to propell the Windies total to 322/8. Windies scored 68 runs in the last ten over.

Windies added another 30 runs in the last five overs losing one wicket, that of skipper Jason Holder, bowled by Yuzvendra Chahal.

Shimron Hetmyer departed soon after reachin his third ODI hundred. He failed to make the most out of a loose delivery from Ravindra Jadeja, with the ball going down the leg-side, and ended up top-edging.

A brilliant hundred from Shimron Hetmyer. The 21-year-old Guyanese hit the fifth ball of 38th over over extra cover boundary for a six to bring up his third ton. Mohammed Shami leaked 13 runs in that over. 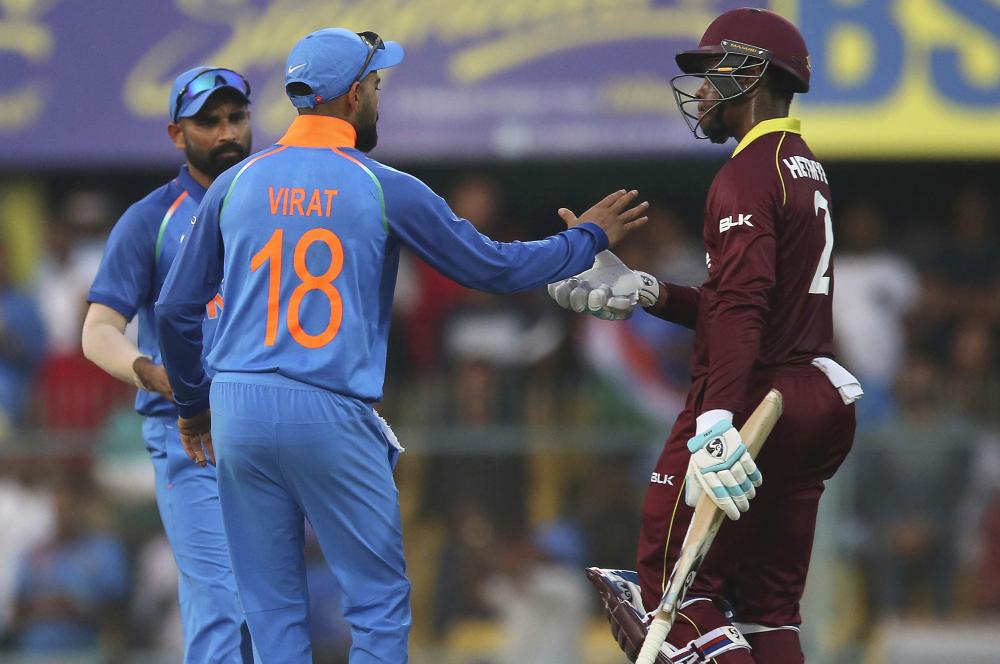 He and skipper Jason Holder have added 58 runs for the sixth wicket as Windies look for a big total. In the last five overs, Windies have scored 45 runs.

In the last five overs, Windies have added 33 runs with Shimron Hetmyer leading the charge. In the process, he also reached second ODI fifty.

But Ravindra Jadeja removed Rovman Powell, LBW, in the 31st over to break a 74-run fifth-wicket stand.

That brought Windies skipper Jason Holder in the centre.

Shimron Hetmyer hit a four and six off successive deliveries to take 17 runs from the 24th over. Just before that he reached 500 ODI runs in his 13th inning, joint fastest for Windies.

Samuels gone for a duck in his 200th ODI. Yuzvendra Chahal trapped him in front.

In the previous over, Khaleel Ahmed dismissed Kieran Powell, caught at long-on by Shikhar Dhawan.

Shai Hope joined Powell in the centre. Five runs from the over.

Mohammed Shami bowled the first over to Kieran Powell. Four through cover off the first ball. Shami did well to finish the over with only four runs.

Umesh Yadav shared the new ball. Only a single from the second over. Then, in the following over, debutant Chandrapaul Hemraj hit back-to-back fours off the last two deliveries. Eight runs from Shami's second over.

Rishabh Pant gets his ODI cap from MS Dhoni.

For the Windies, Oshane Thomas and Chanderpaul Hemraj make debuts.

Follow live updates from the first ODI match between India and West Indies, being played at Barsapara Cricket Stadium, Guwahati.