The political parties in Jammu and Kashmir reiterated that they are bound, wholly, by the contents of the 'Gupkar Declaration', a resolution issued after an all-party meeting on August 4, 2019 at the Gupkar residence of NC president Farooq Abdullah. 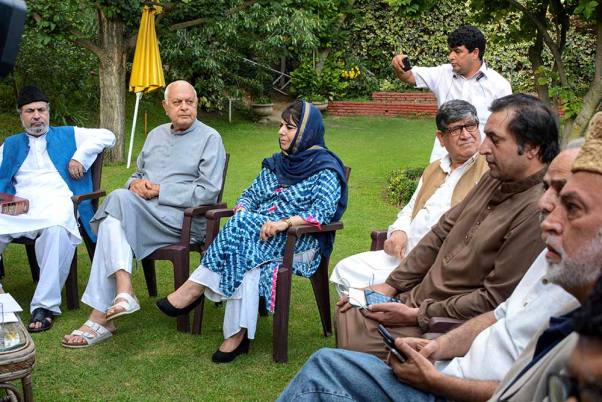 Ending the year-long silence, all mainstream political parties in Kashmir on Saturday issued a joint statement describing abrogation of Article 370 as "grossly unconstitutional" and a "measure to disempower" people of the erstwhile state.

The joint statement by the political leaders is a significant development in the politics of Jammu and Kashmir. It is for the first time since the abrogation of Article 370 on August 5 last year that the regional political parties have come under one banner.

According to the statement, the political parties unanimously maintained that the abrogation of Article 370 has "unrecognizably changed the relationship between J&K and New Delhi."

They reiterated their commitment to collectively fight to restore the special status of J&K as guaranteed under the Constitution and the commitments made from time to time.

Without mentioning China and Pakistan, the parties say they exhort “leadership of the subcontinent” to take due notice of the ever-increasing skirmishes at the LAC and LOC resulting in casualties on both sides and unabated violent incidents in J&K and work for enduring peace in the region.

“The series of measures undertaken on 5th August 2019 were grossly unconstitutional and in reality measures of disempowerment and a challenge to the basic identity of the people of J&K. The measures attempt to redefine who we are. These changes were accompanied by repressive measures meant to silence people and coerce them into submission, and continue unabated,” reads the joint statement issued by former National Conference leader Farooq Abdullah, Peoples Democratic Party chief Mehbooba Mufti, G A Mir of Congress, M. Y Taragami of the CPI (M), Sajad Gani Lone of Peoples Conference, Muzaffar Shah of Jammu and Kashmir Awami National Conference.

They termed the statement as 'joint statement by Gupkar Declaration signatories'.

Gupkar Declaration, signed on August 4, 2019, says that all the parties would be united in their resolve to protect and defend identity, autonomy, and the special special status of the J&K against all attacks and onslaughts whatsoever. It says "modification, abrogation of Articles 35A, 370, unconstitutional delimitation or trifurcation of the state would be an aggression against the people of Jammu Kashmir and Ladakh."

A day after the declaration was signed, the BJP-led central government abrogated Article 370, Article 35A of Indian Constitution and bifurcated Jammu and Kashmir into two Union Territories amid communication blockade and arrest of thousands of people including three former chief ministers.

The joint statement says the signatories to the Gupkar Declaration of have barely managed to establish basic level of communication with each other in the face of a series of prohibitive and punitive curbs imposed by the government, "aimed at impeding all social and political interactions."

“The unfortunate events of 5th August 2019 have unrecognizably changed the relationship between J&K and New Delhi. In a spitefully shortsighted and unconstitutional move, Articles 370 and 35A were abrogated and the State was bifurcated and relegated to the status of two Union Territories and its Constitution tried to be made unenforceable,” the statement reads.

The Kashmiri mainstream politicians said there is unanimity amongst them that "collective institution is the effective way to fight for these rights and tirelessly struggle to get back the special status and restore the Constitutional guarantees forcibly taken away, against our will."

Centre Asks States Not To Put Restrictions On Inter-State Movement Of People, Goods