In 2014, former Chief Minister N Chandrababu Naidu had announced Amaravati as the proposed capital city, to be developed over many years.

The World Bank has pulled out $300 million lending to the Amaravati Capital City project in Andhra Pradesh, the ambitious project of former chief minister Chandrababu Naidu.  The World Bank website shows the status of the ‘Amaravati Sustainable Infrastructure and Institutional Development Project’ as ‘Dropped.’ (See screenshot below) 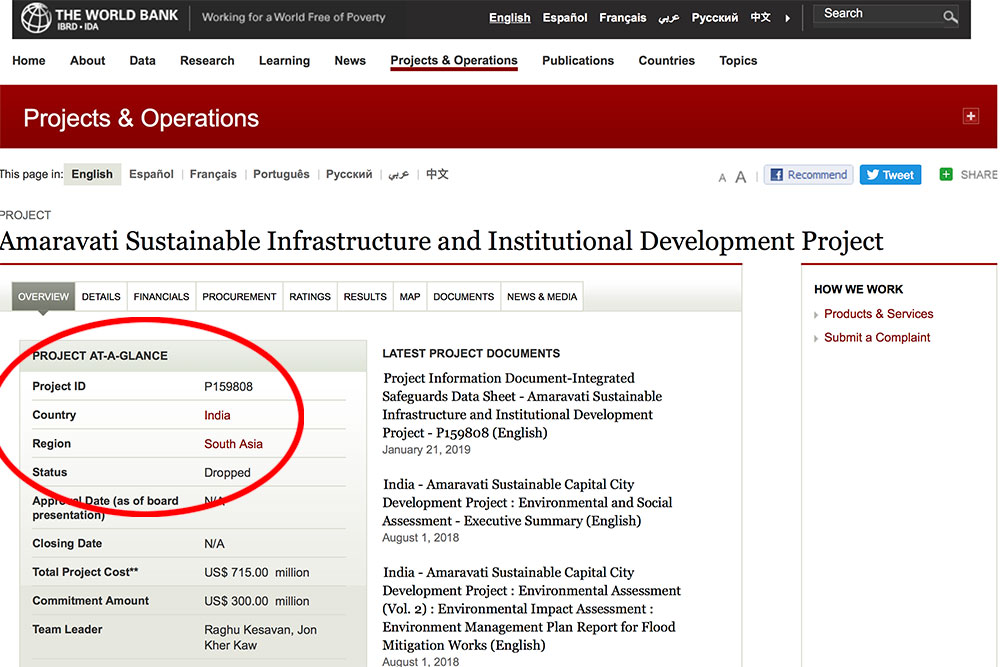 The project was to be co-financed by another multilateral funding agency Asian Infrastructure Investment Bank (AIIB).

A senior official told Outlook that the government has withdrawn its request for financing the project. "The Government of India (GoI) has withdrawn its request to the World Bank for financing the proposed Amaravati Sustainable Infrastructure and Institutional Development Project. The World Bank’s Board of Executive Directors has been informed that the proposed project is no longer under preparation following the government’s decision," the official said.

“We are happy that World Bank took cognisance of the gross violations involved in the Amaravati Capital City project that threatened the livelihood of people and fragile environment. While we celebrate this victory of people, who stood up to the intimidation of the state, we warn the government and financial institutions not to push their agenda without the consent of the people,” said Medha Patkar, senior activist of Narmada Bachao Andolan and National Alliance of People's Movements, in a press release on Thursday.

The project was to be co-financed by another multilateral funding agency Asian Infrastructure Investment Bank (AIIB). Beijing-based AIIB had committed USD 200 million.

Environmental activists, farmer leaders, and civil society organisations opposed and criticised this project for building the city on the floodplains of river Krishna, diverting fertile farmlands and forests, displacing around 20,000 families, acquiring lands, and allegedly favouring contractors for the construction of the city.

In 2014, former Chief Minister N Chandrababu Naidu had announced Amaravati as the proposed capital city, to be developed over many years.  Naidu had envisaged Amaravati as the newest metropolis of India, spread over 217 square kilometres. The Singapore government had prepared the master plan for the same.

Naidu's government had claimed that farmers voluntarily came forward to give 33,000 acres under an innovative land pooling system to develop the state capital. He had also succeeded in launching the works to the tune of Rs.35,000 crore over last two years.

After taking over as the new chief minister in May, Y. S. Jagan Mohan Reddy had alleged that there was a big land scam in Amaravati to benefit then chief minister and those close to him. He had declared that the government will get the irregularities in land acquisition and awarding works for various projects thoroughly probed.

(With inputs from G.C. Shekhar in Chennai)