Bedi also seen stopping an overcrowded auto-rickshaw and warning its driver, besides asking some passengers to get off. 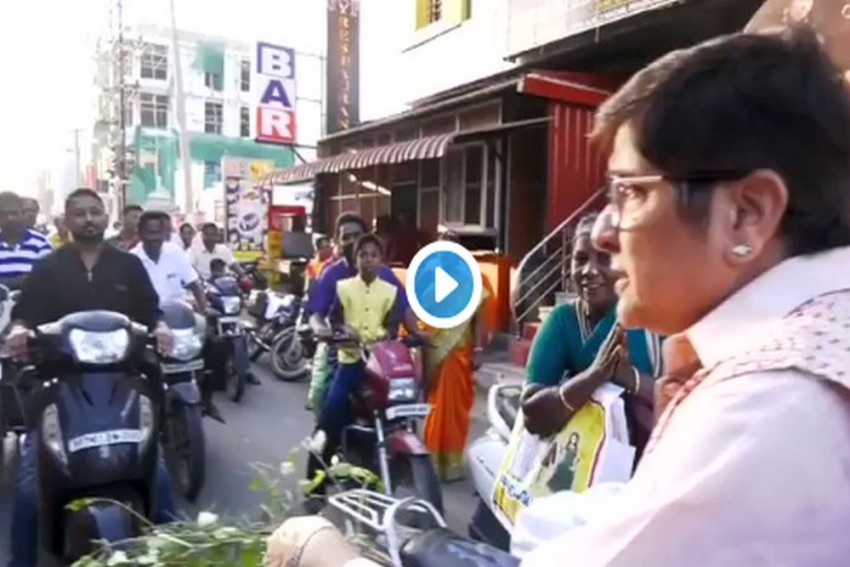 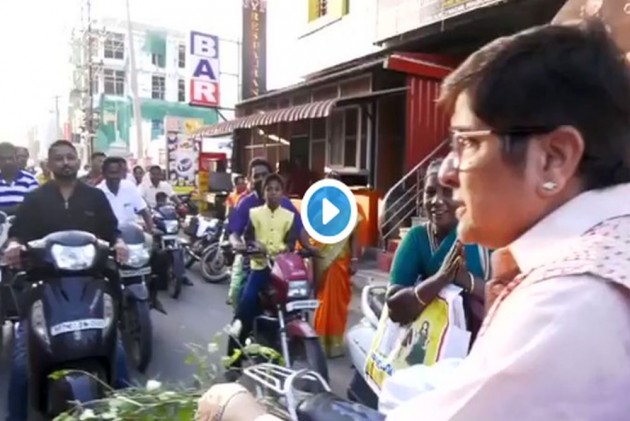 Puducherry Lieutenant Governor and former IPS officer Kiran Bedi turned traffic cop for a day as she stopped two-wheelers being driven by people without helmets and requested them to don the safety gear.

Bedi,  the country's first female IPS officer and known as a no-nonsense cop, led a special drive on road safety on the busy Puducherry-Villupuram main road on Sunday.

A video shared by her on Twitter shows Bedi stopping a man, who was driving a motorcycle with a woman riding pillion alongwith two children, the girl riding pillion and the boy seated in front. "All four will fall," Bedi told the man. "Such a violation of traffic rules will not be tolerated," she added.

When there’s no culture of wearing a helmet in Puducherry and its CM keeps stalling enforcement & every 3rd day there’s a fatal accident, due to non wearing of a helmet,where does one begin?Give up or take it in one’s own hands as well, alongside challenging enforcement agencies? pic.twitter.com/VQAUbYgUdU

Bedi, who has been at loggerheads with the Congress Chief Minister  V. Narayansamy, also spotted an overcrowded auto-rickshaw and warned its driver, besides asking some passengers to get off.

According to media reports, Bedi stopped in front of every motorist seen without a helmet. She also instructed a traffic policeman to "talk to them one by one".

"Where is your helmet," she could be heard asking each of the motorists who were driving without helmets.

now thats something being so honest with your job and getting the dirty way when no options left. Bringing change to society is never an easy task even when its about making ppl waer helmet for there own safety! salute to @thekiranbedi for her commendable efforts! https://t.co/pp6TxLPXfP

"Now that's something being so honest with your job and getting the dirty way when no options left. Bringing change to society is never an easy task even when its about making ppl waer helmet for there own safety! salute to @thekiranbedi for her commendable efforts!

She is a Iron Lady...
Proud of you @thekiranbedi ji
Want to be like you... https://t.co/MyhX1gMJaR

This is not the first time when Bedi criticised Puducherry's traffic system. Earlier on December 18, 2018, Bedi went incognito in a private car to see traffic management in Puducherry.

Went incognito in a private car to see traffic managment. And this what was found. ðÂÂÂÂÂÂÂÂÂ pic.twitter.com/5cFacPAC6k

Unhappy with the system, Bedi later in a WhatsApp message to the media had said that she was "compelled to take the road incognito" to see traffic regulation.

"Traffic regulation and management was found to be wanting in several respects and there were serious flaws in the task of regulation of traffic," she had said adding traffic signal lights were also not properly functioning.

National Road Safety Week is celebrated in the country between February 4 and February 10.

SC Holds Nageswara Rao Guilty Of Contempt, Orders Him To Sit In A Corner