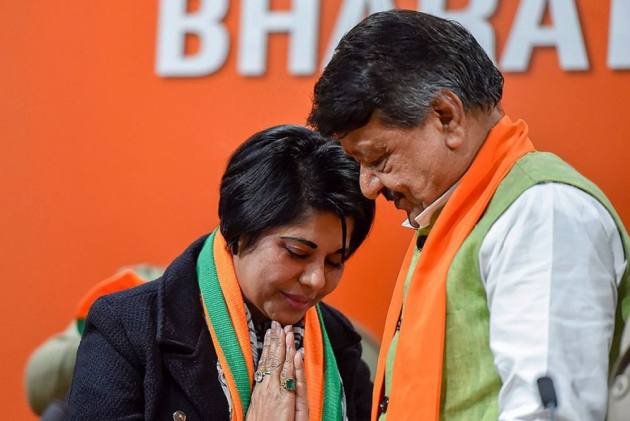 BJP member and former IPS officer Bharati Ghosh moved the Supreme Court on Monday seeking a stay of an arrest warrant and quashing of an FIR lodged against her.

Last week, Ghosh was nominated by the BJP from the Derba Assembly constituency for the upcoming West Bengal Assembly polls. Ghosh is up against Humayun Kabir, a Trinamool Congress candidate and also a former IPS officer.

A bench of Justice U U Lalit and K M Joseph, which could not take up the matter on Monday, listed it for hearing on Tuesday.

Ghosh, in her intervention application filed through advocate Sameer Kumar, said that despite the top court granting her relief of “no coercive action” in series of “false cases” lodged against her on February 19, 2019, which was extended from time to time, she has been implicated in new cases.

“Petitioner submits that such FIRs are kept secret as long as possible only to emerge suddenly to harass the applicant/petitioner and to keep her entangled in Court proceedings at every moment and, consequentially, to prevent her from pursuing her political career,” she said.

Giving the details of a FIR lodged against her at Keshpur police station for alleged voluntary causing hurt, wrongful restraint and attempt to murder and under provisions of Representation of People’s Act, she said that case was lodged during Parliamentary elections on May 12, 2019.

Ghosh said that she was a BJP candidate from Ghatal Parliamentary constituency in 2019 Lok Sabha polls and alleged that she was attacked by the goons from Trinamool Congress party at each and every polling booth and police remained mute spectators.

“It is submitted that the Applicant/Petitioner has no knowledge whether the present case was registered with the due permission of the State Election Commissioner particularly so as the Applicant/Petitioner was the candidate for BJP party from the Ghatal constituency in this election and the violent incident of that day held all the media and national channel captive for long hours,” the plea said.

She said that the Keshpur FIR was not uploaded till recently and she had no knowledge of it until a warrant of arrest under section 75, CrPC came to her.

“..For one year ten months she was not informed about this FIR by the State Police, although the State had appeared before this Court several times post May 12, 2019 and had made submissions regarding the other cases against the Applicant/Petitioner. It is also pertinent to note that the charge sheet has already been filed in the said FIR,” her plea said.

She sought quashing of FIR lodged at Keshpur police station of the West Midnapore district of the state and stay of all consequential proceedings including the arrest warrant emanating from the said case till the pendency of her plea in the top court.

She sought directions to Centre for calling of reports of CISF (providing her security) submitted to MHA regarding the incident of May 12, 2019, when she was attacked by Trinamool Congress workers.

She also sought direction to State for providing her the complete list of cases/FIRs registered against her.

On February 19, 2019, the top court had provided her relief by granting her protection from arrest in all the cases registered against her.

Ghosh, once considered close to West Bengal Chief Minister Mamata Banerjee, claimed that the police has registered over dozen FIRs against her so far including a case of alleged extortion and illegal exchange of banned notes for gold.

On October 1, 2018 the top court had granted her protection from arrest in a case of alleged extortion and illegal exchange of banned notes for gold.

The West Bengal government had earlier opposed the plea of Ghosh and said she wants a stay of arrest on a writ petition, which cannot be done.

On February 4, 2019, Ghosh had joined the BJP in the presence of Union Minister Ravi Shankar Prasad and senior party leader Kailash Vijayvargiya alleging that "thugocracy" has replaced democracy in West Bengal.

Ghosh, who was the West Midnapore Superintendent of Police for more than six years, was transferred as commandant of the third battalion of the state armed police on December 26, 2017. She resigned from service two days later.