BJP has fielded 13 of the 16 disqualified legislators who had joined the party leading to the fall of the Congress-JDS government. 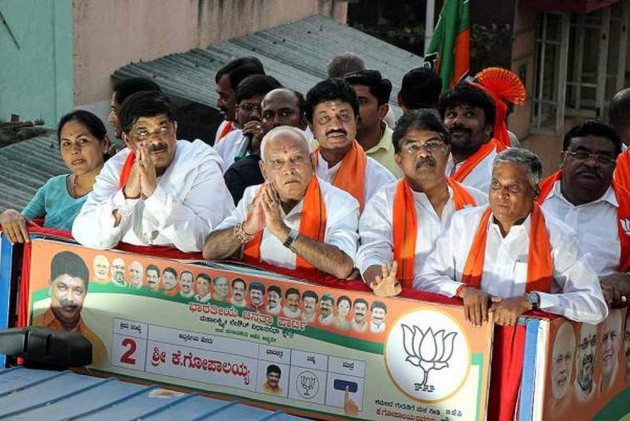 Voting is underway in 15 assembly constituencies in Karnataka and the results would determine the fate of Chief Minister B S Yediyurappa-led BJP government in the state.

An estimated 32.51 per cent of the electorate cast their ballot till 1.24 pm on Thursday. The polling began at 7 am and is scheduled to conclude at 6 pm. The results will be declared on December 9.

Bypolls have been by and large peaceful, barring some stray incidences of argument between workers of political parties and also with police at some places.

There were reports of EVM malfunction due to technical glitches in some places like in Singayyanapalya in K R Puram, and in Athani, but they have been set right and voting
was underway.

The by-elections are being held to fill the vacancies caused by the disqualification of 17 rebel Congress and JD(S) MLAs, whose rebellion led to the collapse of the H D Kumaraswamy-led coalition government in July and paved the way for the BJP to come to power.

The BJP needs to win at least six of the 15 seats to remain in majority in the 225-member assembly (including the Speaker, who has a casting vote), which would still have two vacant seats -- Maski and R R Nagar.

In the assembly with the current strength of 208 after the disqualifications, the BJP has 105 MLAs (including an independent), the Congress 66 and the JD(S) has 34 MLAs.

There is also one BSP member, a nominated member and the Speaker.

Among the 15 constituencies going to the bypolls, 12 were held by Congress and three by JD(S).

A total of 37,77,970 electors are eligible to cast their votes at 4,185 polling stations in fifteen constituencies going for polls. There are also 4,711 service voters.

The BJP has fielded 13 of the 16 disqualified legislators who had joined the party, as its candidates from their respective constituencies from where they had won in the 2018 assembly elections on Congress and JD(S) tickets.

A total number of 165 candidates are in the fray for bypolls from all the fifteen constituencies, of which 156 are men and 9 are women.

Among the major political parties in the state, while the BJP and the Congress have 15 candidates each in the fray, the number of JD(S) candidates is 12, while the remaining are from smaller parties and independents.

Most of the constituencies going for the by-polls are facing a direct contest between Congress and BJP but in the southern parts of the state, the JD(S) comes into the picture, making it a triangular fight.

During the campaign, the BJP sought votes for "stability", while the Congress and JD(S) urged the electorate to defeat the disqualified legislators responsible for the collapse of their coalition government in July.

Speculations are rife about the Congress and the JD(S) not being averse to joining hands once again to form a coalition government in case the BJP fails to garner the required number of seats to stay in majority.

The Election Commission and police have made elaborate arrangements for the smooth conduct of the bypolls in all the 15 constituencies.

Out of total 42,509 personnel deployed for election management, 19,299 are polling personnel.

As many as 11,241 personnel from state police and 2,511 Central Armed Police Forces (CAPF) have been deployed on security duty.

Polling officials said 884 polling stations have been marked critical and 414 stations will be manned by CAPF.