The finance minister was participating in a discussion, initiated by Congress' Anand Sharma, on the economic slowdown in the country. 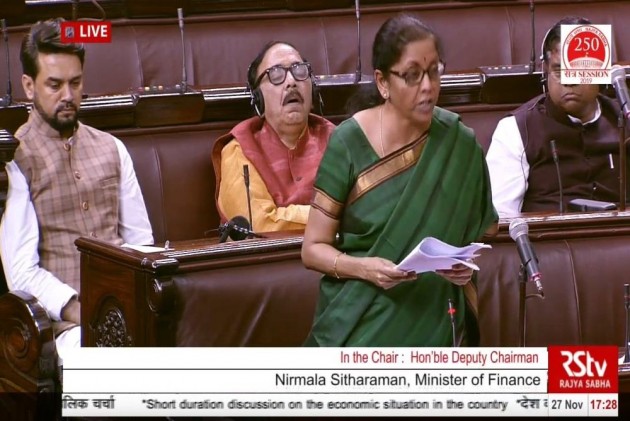 Mahendra Nath Pandey, the Minister for Skill Development, was on Thursday seen taking a nap in the Rajya Sabha even as Finance Minister Nirmala Sithraman spoke on the state of Indian economy.

The finance minister was participating in a discussion, initiated by Congress' Anand Sharma, on the economic slowdown in the country.

Sharma said the current slowdown can't be labelled as a cyclical phenomenon. In her long speech, the minister said India's economic growth may have slowed but there was no recession and there won't be one in future.

However, all this while, Pandey could be seen catching forty winks, and there's very little the Twitter world misses out on these days.

Here's how Twitter reacted to Pandey sleeping in the Rajya Sabha:

The guy sleeping was just trying to personify ''ECONOMY'' ...... all inactive and asleep!!

Where @nsitharaman is presenting her speech in the @rajyasabhatv there behind her two of the #BJP MPs are sleeping and Mr. @ianuragthakur is waking them up constantly not once. Yeh log Desh badlenge. #RajyaSabha #WinterSession #AnuragThakur