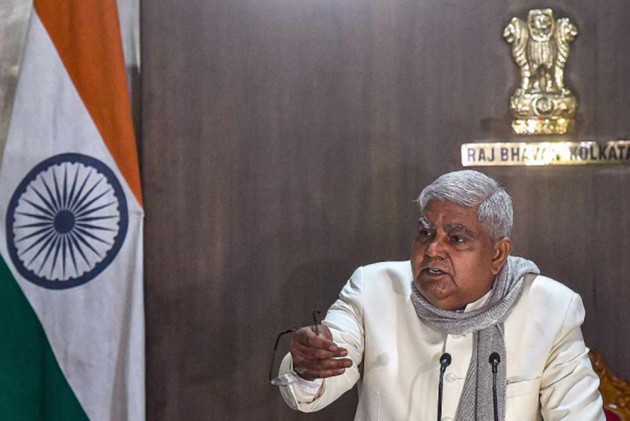 The Trinamool Congress (TMC) on Wednesday said it has moved President Ramnath Kovind to remove Jagdeep Dhankhar from the post of the West Bengal governor, accusing him of "transgressing constitutional limits" by regularly commenting against the state administration.

Responding to the developments, the BJP said the governor is acting within his constitutional parameters while the "TMC is scared".

A team of TMC MPs sent a letter to the President on Tuesday listing "all such transgressions" by Dhankhar in recent times and urged President Kovind to take action as per Article 156, Clause 1 of the Constitution, the party's Rajya Sabha MP Sukhendu Sekhar Roy told reporters.

You Can Buy A Few MLAs, But You Can't Buy TMC: Mamata

"We have noticed that since he arrived in the state in July last year, he has been regularly tweeting, holding press meets and participating in TV discussions, where he is regularly passing comments on the functioning of the state government, our officers, ministers, the chief minister, even once on the conduct of the speaker of the assembly. Every such action is violative of his constitutional powers," Roy said.

Alleging that Dhankhar has been making such statements in the public at the behest of the BJP-led government at the Centre to embarrass the TMC government in the state, Roy said, "This had never happened earlier in the 75-year-long history of West Bengal. If he has to say anything, he can communicate that through means that are provided to him by the Constitution, not by tweeting or holding press meets."

Roy cited Dhankhar's statement seeking expense details of the Bengal Business Summit, his demand for an apology from the chief minister over some of her recent comments and his "threat to 25 IPS officers" as instances of the governor "violating his limitations".
"He has also said it is his duty to ensure free and fair polls. Who is he? It is the domain of the Election Commission. Similarly, only the CAG (Comptroller and Auditor General of India) has the authority to seek details of the expenses of state-organised events like the Bengal Business Summit," Roy said.

"A constitutional head chosen by the Centre cannot interfere in the functioning of the state in this way. It is akin to interference in the parliamentary system. He is intentionally doing these things. He is not fit to occupy the seat of the governor which had been occupied by many illustrious personalities since Independence," Roy added.

He said such actions by the governor goes against earlier Supreme Court orders as well. The letter to the President was signed by five senior party MPs from both the Houses, including Sudip Bandyopadhyay, Kakoli Ghosh Dastidar, Derek O'Brien and Roy himself.

Dhankhar, who has had frequent run-ins with the TMC government in the last one-and-half years, has regularly flagged concerns about the alleged politicisation of the state administration and police, the functioning of the state-run universities and region’s the law-and-order situation among other issues.

To a question, Roy said this was the party's initial step with regard to the governor. "Depending on the situation and seeing the response, we will take further action in the future," he added.

Reacting to the development, BJP national general secretary Kailash Vijayvargiya said the governor is performing his constitutional duty as he finds that the state government is not performing its duty properly.

"The governor is acting within his constitutional parameters as the head of the state. The TMC is doing this as it is scared," the senior BJP leader added.