The protesters, mainly women, have been staging a sit-in demonstration for the past two months against the CAA, NRC and NPR. 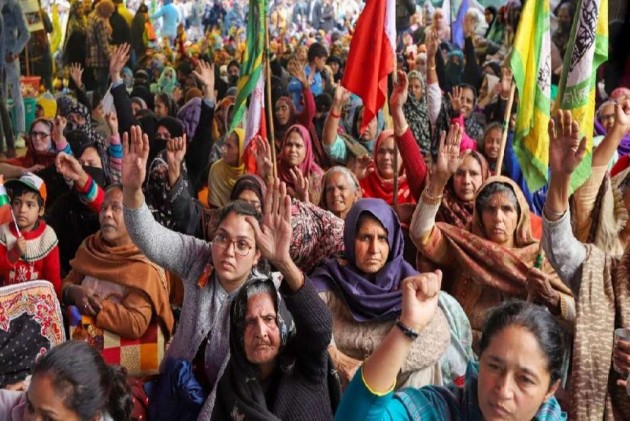 Shaheen Bagh protesters began their march from the protest site towards Home Minister Amit Shah's residence on Sunday afternoon but was stopped by the police midway as they did not have permission.

RP Meena, DCP South East Delhi, said, "They (protesters) told us that they wanted to take out a march (to meet HM) but we told them they cannot as they do not have appointment call from Union Home Minister. We are talking to them and we hope that they will understand."

A heavy police deployment was also in place at Shaheen Bagh where hundreds of women protesters gathered to march towards Shah's residence for a dialogue over the new citizenship law.

Barricades were placed to stop the protesters from marching ahead. The protesters said they will carry out the march peacefully.

The protesters have not yet received permission from the Delhi Police.

In a letter to the protesters, the New Delhi district police said the march was supposed to pass through two more districts and request for it has been sent to the police headquarters for further appropriate actions.

Police said they had asked the protesters at Shaheen Bagh to give the details of the delegation for its meeting with the Union home minister.

In a written response to police, they said 4,000 to 5,000 demonstrators would be marching towards Shah's residence.

The protesters, mainly women, have been staging a sit-in against the Citizenship Amendment Act (CAA), National Register of Citizens (NRC) and the National Population Register (NPR) for the past two months.

Earlier, the Delhi Police said they had asked the Shaheen Bagh protesters to give the details of the delegation to facilitate their meeting with Shah, but demonstraters said they all wanted to go.

The police said they had denied the permission, adding "we will see what can be done". This comes a day after protesters at Shaheen Bagh said they will start their march to the Home Ministry at 2 PM on Sunday to meet Shah.

On Saturday, a section of protesters said they were ready to meet Shah to raise their concerns over the new citizenship law but added that the onus was on the government to call them for talks.

However, Home Ministry officials said no request has come for an appointment with Shah to discuss issues related to anti-CAA protests.

Some protesters also said they would march to the Union Home Minister's residence on Sunday afternoon.

The protesters, mainly women, have been staging a sit-in demonstration for the past two months against the Citizenship Amendment Act (CAA), National Register of Citizens (NRC) and National Population Register (NPR).

They said the protest was "leaderless" and it was up to the Home Minister to decide who all he wanted to call for talks.

An announcement in this regard was also made by a speaker from the dais at the protest venue.