‘The State Has Left My Mother To Die,’ Says Sudha Bharadwaj’s Daughter

As activist Sudha Bharadwaj's health deteriorates inside prison, her friends and family speak to Outlook about her incarceration and work among the tribals in Chhattisgarh. 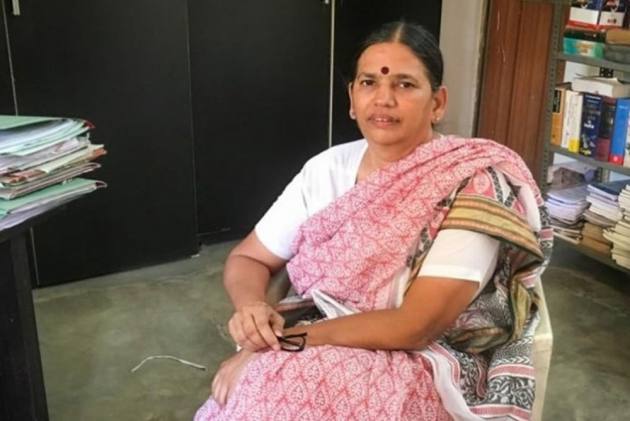 ‘Dedicated to those prisoners
in whose hearts the future shone like a pearl
But was burnt in the troubled nights of the prison
and diminished into a tiny flicker.’

(Translation of some lines from the poem ‘Intesaab’)

Sudha Bharadwaj, a trade unionist, activist and lawyer, was arrested in connection with the Elgar Parishad Maoist links case in 2018. The case pertains to the Elgar Parishad conclave held in Pune district on December 31, 2017. It is alleged that speeches made by some activists at the conclave led to violence near the Koregaon-Bhima war memorial on outskirts of Pune city the next day. Sudha has been lodged in the Byculla women's prison in Mumbai since her arrest.

As Sudha’s health deteriorates inside prison, her friends and family speak to Outlook about her incarceration and work among the tribals in Chhattisgarh.

Smita had known Sudha since her college days. It was in 1984 when she first met Sudha, a young graduate from IIT Kanpur who had a deep understanding of politics and oppression. “She always stood against the exploitation of people. She was an advocate of mass movements and believed in organizing people to raise their voices through democratic channels,” Smita tells Outlook.

Smita recalls the day when Sudha decided to give up her US citizenship to follow her passion to fight against injustice. She says, “It was the sole purpose of her life. She was so grounded and humble that she never thought of her well-off background, her US citizenship, her education from a premiere institute as some privileges to hold. She simply went to the US embassy and applied to give up her citizenship. The people there were shocked. To make her rethink, they outlined all the privileges she would be giving up. But to Sudha it was very natural. She had decided to work for the oppressed and downtrodden masses. She gave her innocent, toothy smile and stood firm on her decision.”

Meanwhile, Maaysha, Sudha’s 24-year-old daughter tells us how her mother dedicated her life to helping the tribals in Chhattisgarh. “We used to live in a town named Dalli Rajhara in Chhattisgarh. She joined the Chhattisgarh Mukti Morcha (CMM) and used to teach the children of workers and tribal people in the area. Since Mamma was always busy with union work, I was brought up by a factory worker’s family from the union,” says Maaysha.

Maaysha also adds that her mother used to keenly follow law proceedings of tribal people, who were wrongly incarcerated, those displaced and those fighting for due wages.

She recalls how the workers in the area requested Sudha to pursue law and fight their cases. Considering the lack of pro-people voices in the courtrooms and the workers’ faith in her, Sudha, at the age of 40, decided to become a lawyer. Thereafter, she fought and won many cases for the workers and tribals against the forceful land grab by the giant corporations.

Maaysha proudly says, “I have seen many photos of my mother holding me close to one shoulder and raising another fist high while sloganeering. I remember how she used to walk long rallies holding the placard in one hand and my fingers in the other. When she gave speeches, I used to stand beside the stage and watch her. There were times when I used to see her sitting on hunger strikes for the rights of the poor. She had given her heart and soul to the struggles of the poor.”

Sudha, now 58, was arrested in August 2018. She has sought bail on multiple occasions since then stating that she suffers from chronic conditions such as diabetes and hypertension.

With her eyes watering, Maaysha remembers her mother’s arrest. “On the morning of August 28, 2018, before she was taken away, Mamma and I had 10 minutes of privacy. I was on the brink of tears and I couldn’t utter a single word. The next two years, I was lonely and aloof from the world. I could neither sleep at night, nor during the day. I would just take out my mamma’s photographs and keep gawking at them and crying my eyes out. I developed severe panic attacks and anxiety issues. My life still haunts me. Even now, while I am talking to you about this, I am having those tremors. I keep imagining her by my side. I keep longing for Mondays and Thursdays when I get to talk to her for five minutes. That is all I have,” says Maaysha as she bursts out crying.

Meanwhile, Smita believes that all arrests made in connection with the Elgar Parishad case were carried out to stifle voices of dissent.

Activist Stan Swamy’s (another co-accused in the Elgar Parishad Maoist Links case) death, who died while awaiting bail, has deeply shaken Maaysha. “The day I got to know about Father Stan’s death, I cried my heart out. I am very scared for my mother. When our lawyers tell us about how her health is deteriorating, it kills me on the inside. Father Stan could have been saved. But the state left him to die. I am scared they might do the same to my mother,” she says.

‘Isn’t it the government’ s job to ensure a dignified life for the marginalised? Isn’t it their job to work for the poor and the downtrodden? Mamma was doing their job. She left all the comfort and privileges in her life just to do what the government couldn’t do in so many years. The world needs people like my mother. I will never forgive them for ruining our lives,” says Maaysha.

On Friday, the Maharashtra government told the Bombay High Court that a sessions court in Pune taking cognisance of the police's charge sheet in the Elgar-Parishad Maoist links case in 2018 did not cause any prejudice to the accused persons, and therefore, did not entitle Sudha Bharadwaj or her co-accused to default bail. The HC will continue hearing the plea on August 2.