'Everyone has excepted the verdict given by the Supreme Court. I appeal to shiv sainiks to celebrate the verdict without hurting anybody's sentiments. The other side..' said Shiv Sena chief Uddhav Thackeray said. 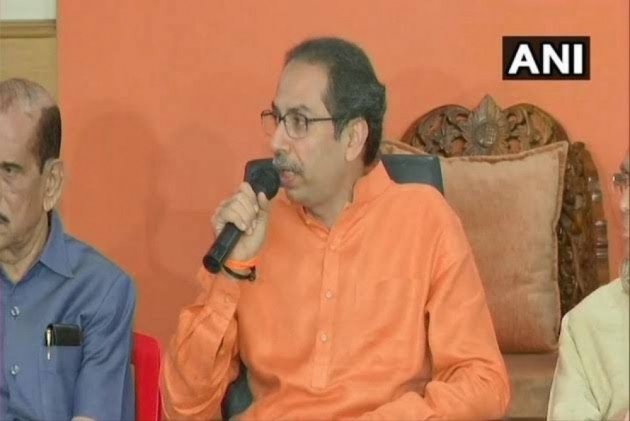 Shiv Sena chief Uddhav Thackeray on Saturday hailed the Supreme Court verdict on Ayodhya dispute paving way for the construction of a Ram temple in the holy town as a "red letter day" in the history of India.

Thackeray, whose party is locked in a bitter dispute with ally BJP over the formation of government in Maharashtra on the issue of sharing the post of chief minister, also announced that he might visit Ayodhya on November 24.

Addressing a press conference, Thackeray said the verdict has formally ended the dispute over the birthplace of Lord Ram.

"Everyone has excepted the verdict given by the Supreme Court. I appeal to shiv sainiks to celebrate the verdict without hurting anybody's sentiments. The other side.." Thackeray said.

"I had visited Ayodhya on November 24 last year and offered prayers. I also participated in 'aarti' on the banks of river Sarayu there. I had then taken along with me soil from the Shivneri fort, the birthplace of Chhatrapati Shivaji Maharaj, and prayed for a miracle to ensure construction of a Ram temple. I am happy that that miracle happened within a year," Thackeray said.

Referring to the apex court verdict, he said one chapter has closed and it is pertinent for all to make a new beginning.

"If everyone shows understanding and maturity like today, our country will be a superpower," he said referring to the ground situation in view of the verdict.

Thackeray said he would visit L K Advani, who had undertaken a Rathayatra.

"It (Ram Janmabhoomi movement) was a big agitation. Some people are not with us now. Some have lost their lives in the agitation. I salute them all," Thackeray added.

The BJP and the Sena have failed to form the government despite having a majority of 161 MLAs in the 288-member House even though the term of the current Legislative Assembly ends on November 9.