National Shubha Mudgal To Rapper Sumit Roy: When A Common Cause Makes Them Perform At Shaheen Bagh

Shubha Mudgal To Rapper Sumit Roy: When A Common Cause Makes Them Perform At Shaheen Bagh

Amid tensions and firing incidents ahead of the Delhi assembly elections, renowned artists came in to perform at Shaheen Bagh in solidarity with the protesting women 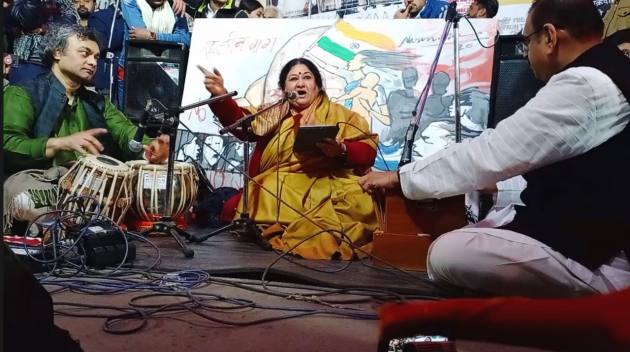 Amid the cacophony of election campaign songs of political parties in the run-up to Delhi Assembly elections, different tunes have been blaring at a distant corner of Shaheen Bagh.

Artists have been pouring in here every evening since February 2 to perform in solidarity with the women who have been staging a sit-in against the Citizenship Amendment Act for more than a month.

The week-long performances by artists, including musicians, thespians and dancers, started a day after a man opened fire near the protest site. It also follows the BJP's strident opposition to Shaheen Bagh protests during its election campaign.

Mudgal said her performance at Shaheen Bagh was an act of solidarity.

"I went last night (February 4) to sing at Shaheen Bagh to express solidarity with the movement in the only way I can: by singing songs and poems of love, peace, equality, fraternity and poems of resistance written by some of the great poets the world has known," Mudgal told Outlook.

Shaheen Bagh is not the usual setting many of these artists perform in. It's a sit-in protest in the middle of a wide street, with tarpaulin sheets making a long canopy over an enclosed area occupied by women protesters, majority of them from the Muslim-dominated neighbourhood. At the back of the tent, a large group of people, several of them Sikhs, have spread blankets to camp there. They have travelled from Punjab to join the anti-CAA protests and to express solidarity.

As such, the performance at such a setting comes as a different experience for the musicians.

"The experience was very different from what we usually experience," said Mudgal.

"No fancy venue, stage, sound or lights, yet people from diverse backgrounds gather for a common cause, willing to listen to each other," she added, noting that "the presence of women in such large numbers and particularly those whose strength and resolve is inspiring, making it a special experience."

Underlining the significance of artists performing in solidarity with the protesters, Delhi-based rapper Sumit Roy said, "We have to combine our voices, creativity, skills -- everything has to be brought together to show the truth which the government is trying to make us forget," Roy said, adding that the performance at the protest site was a result of artists' call to other artists to stand in solidarity with the women of Shaheen Bagh.

Roy, whose song 'Poorna Swaraj' went viral on Internet amid the anti-CAA protests that started after December 15 last year, performed at Shaheen Bagh on Monday.

"Everybody has their own ways of contributing to a difficult situation. It's probably the most honest way an artist can contribute through," said Suryakant Sawhney whose band Peter Cat Recording Co. and solo-set Lifafa is also part of a group of artists performing at Shaheen Bagh.

"As for us, we look at it primarily as just about going there, lightening the mood, and entertaining people. That is the role we play," he added.

"It is particularly an interesting protest at Shaheen Bagh. And many of us believe that the society can move forward only when women participate in it more and more...," Sawhney said.

Delhi elections brought Shaheen Bagh under the spotlight, with the BJP frequently accusing Opposition of fuelling the protests. its strident opposition to women-led protests has catapulted Shaheen Bagh to an election issue. Three firing incidents at and around Shaheen Bagh within a span of few days has brought it more attention. On the other hand, the Supreme Court is slated to hear on Monday a plea seeking to vacate protesters from Shaheen Bagh. Amid all these developments, the women here say the protests are only going to get "bigger and stronger" in the coming days if the CAA is not rolled back