Twenty-three people, most of them attending a funeral, were killed and 15 others injured when the roof of a shelter at a cremation ground in Uttar Pradesh's Muradnagar collapsed on Sunday 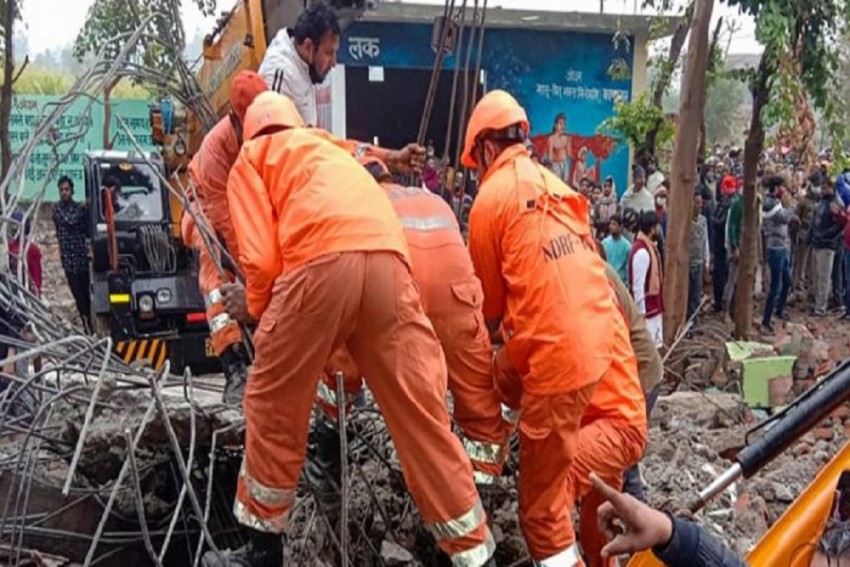 Arvind Kumar, a resident of Delhi, had gone to Muradnagar in Uttar Pradesh on Sunday to attend his grandfather's funeral. His family is now preparing for a second funeral in two days after the roof of a shelter at the cremation ground collapsed, killing him and 22 others.

"Everything is finished for us," said an inconsolable Rakesh Kumar, the elder brother of Arvind.

"I called my brother over his mobile. Someone else picked the phone and informed me about the roof collapse. I rushed to the spot. It took two hours to pull his body out of the rubble. He was declared dead soon after we reached the hospital," he added.

His mother, who narrowly escaped the accident, is inconsolable as she waited outside the mortuary of MMG district hospital for her 36-year-old son's body.

Twenty-three people, most of them attending a funeral, were killed and 15 others injured when the roof of a shelter at a cremation ground in Uttar Pradesh's Muradnagar collapsed on Sunday, police said.

Several people had taken shelter under the recently constructed structure while it rained. The dead, all of them men, were mostly relatives or neighbours of Jai Ram, who was being cremated at that time, officials said.

Jaiveer Singh (50), hailing from Uttar Pradesh's Meerut, who was attending the funeral of his brother's father-in-law, also lost his life.

His brother Umesh Kumar said, "It took us one-and-a-half hours to rescue him. The administration used a crane to get the bodies out. Jaiveer was talking to me all this while. But he couldn't make it and was declared dead."

While some complained of the lack of facilities at the hospital and accused the local administration of callous attitude in dealing with the incident, others demanded that the contractor responsible for the construction of the shelter at the cremation ground be arrested.

"This shelter was built just a month or two ago. It collapsed following the first rain. The contractor should be put behind the bar immediately," said another relative of Jaiveer.

Uddham Singh (25), who had gone with his friends to attend the last rites of his neighbour, said he saw two people dying in front of him.

"I was unconscious for the first 20 minutes. When I got back in senses, I saw my friends getting me out of the rubble. I am in pain now, but hopefully will recover soon," said Singh, who had injuries in his shoulder and foot.

The local people were the first to arrive at the cremation ground in Muradnagar's Ukhlarsi village in Ghaziabad district, adjoining the national capital. Police followed by a National Disaster Response Force (NDRF) unit also then reached the spot, pulling out the dead and the injured from the debris.

Apart from the 23 dead, 15 others were admitted at different hospitals, Ghaziabad (Rural) Superintendent of Police Iraj Raja said.

At least 18 of them had been identified by the evening. Prime Minister Narendra Modi, Defence Minister Rajnath Singh and Uttar Pradesh Chief Minister Yogi Adityanath expressed grief over the deaths.

"I express my condolences to the near and dear ones of those who lost their lives in this accident, and also hope for a quick recovery of the injured," Modi tweeted in Hindi.

Adityanath announced Rs 2 lakh as financial relief for the families of each man killed.

The chief minister also directed Meerut's Divisional Commissioner and Additional Director General of the police zone to submit a report on the incident.

Union minister V K Singh, who is a Member of Parliament from Ghaziabad, and several senior police and administration officials visited the accident site.

Uttar Pradesh Health Minister Atul Garg, who is the local BJP MLA, met some of the injured at the government hospital here.

Man Kills Wife Then Hangs Himself In West Bengal