'Rights & Duties Go Hand In Hand': PM Modi On Violence In UP During CAA Protests

Modi was addressing a gathering after unveiling a statue of former prime minister Atal Bihari Vajpayee at the Lok Bhawan here. 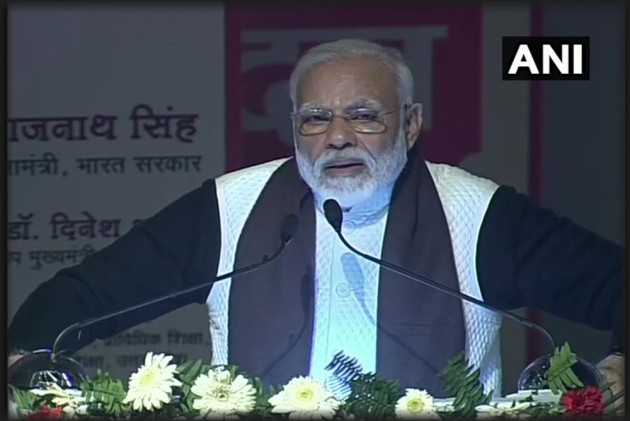 Prime Minister Narendra Modi on Wednesday slammed those who damaged public property during protests in Uttar Pradesh against the amended citizenship law, saying they should understand that rights and duties go hand in hand.

"They (the vandals) should ask themselves was it right. Whatever was torched, was it not of their child's use? What has happened to those common people and policemen who got injured?" Modi asked.

He said he wanted to tell those who damaged public property "not to forget that rights and duties go hand in hand".

Modi was addressing a gathering after unveiling a statue of former prime minister Atal Bihari Vajpayee at the Lok Bhawan here.

He also laid the foundation stone for the Atal Bihari Vajpayee Medical University in the Uttar Pradesh capital.

Referring to Article 370, Modi said it was an "old disease" and it was resolved peacefully.

"How old a disease was Article 370. How difficult it appeared. But it was our responsibility as to how to face such difficult challenges. And, it was done easily. Everyone's 'dhaarna' (perception) was smashed (choor choor ho gaya)," he said.

On the Citizenship (Amendment) Act, Modi said giving citizenship to those who came to India from Pakistan, Bangladesh and Afghanistan to "save the dignity of their daughters", was another problem whose solution was found by 130 crore Indians.

"With this self-confidence, Hindustanis are entering a new decade. Whatever is left to be done, all Indians are trying to find a solution," he said.