Addressing the gathering outside the Palam Airport, Modi noted that the grand 'Howdy Modi' diaspora event in Houston saw the attendance of US President Donald Trump and both the Republicans and the Democrats. 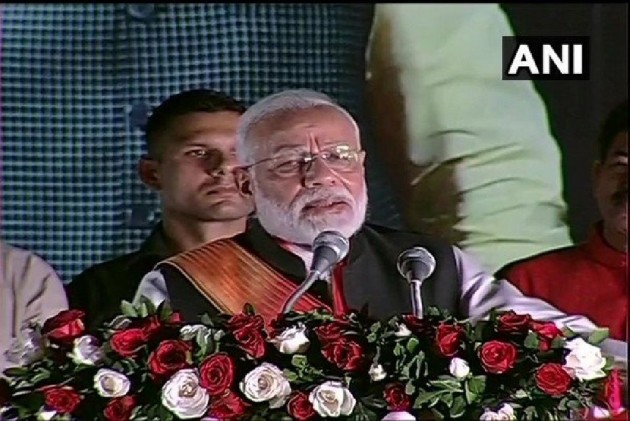 Prime Minister Narendra Modi on Saturday said the respect and enthusiasm for India has increased significantly on the world stage in the last five years, as he was given a rousing welcome by BJP workers here on his return from nearly a week-long trip to the US.

Addressing the gathering outside the Palam Airport, Modi noted that the grand 'Howdy Modi' diaspora event in Houston saw the attendance of US President Donald Trump and both the Republicans and the Democrats. He said what stood out was the manner in which the Indian community in the US showcased their presence.

"The main reason is because of the 130 crore Indians who elected a strong government," the prime minister said.

Six BJP MPs from Delhi and its national working president J P Nadda were present at the event organised by the party unit in the city, which is preparing for assembly polls early next year. Former Delhi BJP chief and Rajya Sabha MP Vijay Goel also attended the event.

Modi termed it as "a memorable welcome". The Prime Minister interacted with party workers, who had lined up outside the airport with drums and cutouts of Modi and 'Howdy Modi' event, hailing him for his "successful" US visit.

He also undertook a roadshow for which tight security arrangements were made by the Delhi Police.

In his address to the BJP workers, Modi recalled the surgical strikes on terror launch pads in Pakistan-occupied Kashmir, saying three years ago on this day he did not sleep all night waiting for his phone to ring.

"That day marked the victory of India's brave soldiers who did surgical strike and made the country proud," he said.

The prime minister returned here on Saturday night from his trip to the US where he addressed the UN General Assembly and the Climate Action Summit, besides several bilateral events, and the "Howdy Modi!" diaspora gathering.

"The prime minister has enhanced the glory of the nation through his statesmanship which was at display during his unprecedented US visit," Delhi BJP president Manoj Tiwari said.

The Delhi BJP mobilised a large number of party workers from the districts. Buses were used to ferry the workers to the airport, said a senior party leader.

Many party workers turned up in traditional attire and performed folk dances like Bhangra on the occasion.

"The idea behind this was to show the popularity and support base of Modi across the country," said the party leader.

"The prime minister has given to the world an incredibly significant message. His speech at UNGA brings to fore the advances made by India, not only on the economic front but also in terms of revolutionary social welfare programmes, which are empowering millions who have traditionally been left out of the governance framework," said former Delhi BJP general secretary Ashish Sood.

Sarita Devi, a party worker from Karol Bagh, said the prime minister has "ensured" that India's name echoes in the US.

According to police, a multi-layer security arrangement was put in place for the event with deployment of 10 additional companies of police throughout the route.

"CCTV cameras were used to monitor smooth progression of PM's convoy. Anti-sabotage teams have also been deployed along with snipers at designated rooftops to keep a thorough watch," said a senior police officer.

Additional traffic police personnel were also deployed to tackle congestion on the route.