Addressing an event marking Rajiv Gandhi's 75th birth anniversary, Sonia Gandhi said challenges facing the Congress are formidable, but it must continue its ideological struggle against forces of divisiveness. 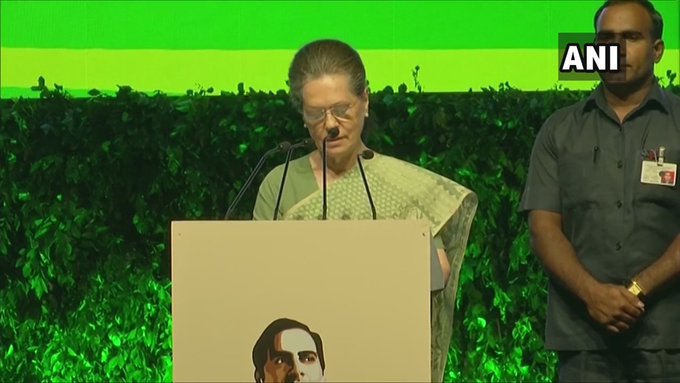 Asserting that electoral ups and downs are inevitable, Congress president Sonia Gandhi on Thursday said challenges facing the party are formidable, but it must continue its ideological struggle against forces of divisiveness.

Addressing an event marking Rajiv Gandhi's 75th birth anniversary, Sonia Gandhi said in 1984 her husband got a massive poll mandate but did not use it to create an atmosphere of fear.

“Rajiv Gandhi got a massive mandate in 1984 but did not use it to create atmosphere of fear or to threaten people,” she said.

As prime minister, Rajiv Gandhi gave the message that unity can be maintained by celebrating India's diversity, she said.

Sonia Gandhi said the former prime minister's 75th birth anniversary is not a ritual being marked by the Congress, but an occasion to reaffirm its resolve to uphold the values that inspired him.

Rajiv Gandhi's birth anniversary is an occasion to resolve to stand up and confront forces determined to destroy the values that inspired him, she said.