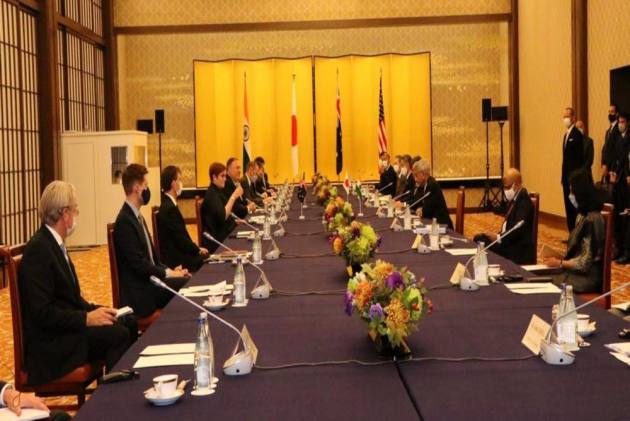 The second meeting of foreign ministers of India, US, Japan and Australia wrapped up in Tokyo on Tuesday with a call for collectively tackling the problems arising from the COVID-19 pandemic. There was no mention of China or the problems arising from its provocative moves in Ladakh or in the larger Indo-Pacific region, in the Indian statement. Foreign minister S.Jaishankar merely said in his opening remarks:

"As vibrant and pluralistic democracies with shared values, our nations have collectively affirmed the importance of maintaining a free, open and inclusive Indo-Pacific. We remain committed to upholding the rules-based international order, underpinned by the rule of law, transparency, freedom of navigation in the international seas, respect for territorial integrity and sovereignty and peaceful resolution of disputes."

Jaishankar did not go beyond calling for a free open and rule-based Indo-pacific. That is the usual formulation while referring to freedom of movement in the oceans. While there is never any mention of China in these statements, the indirect reference is to the People's Liberation Army (PLA) navy’s attempts to intimidate countries like Vietnam, Philipinnes, or Taiwan with all of whom it has territorial disputes on the South China Sea. With Taiwan, it is even more serious with the one-China policy coming into play. Recently there have been attempts to block Vietnamese boats by the Chinese navy, fly planes on Taiwan’s airspace and surprise Japan by sending a submarine into its territorial waters.

After talks with his Chinese counterpart Wang Yi in Moscow, and the ongoing de-escalation talks with the PLA, it was natural for the minister not to bring in any reference to China. But it is certain, China was discussed at length behind closed doors. The Indian minister is likely to have briefed the quad group on the situation in Ladakh and his talks with the Chinese foreign minister.

It was left to the US Secretary of State Mike Pompeo to take on China. With US elections just a month away, and President Donald Trump making China an issue in his election campaign, Pompeo did not hesitate to call out China for the pandemic as well as for its adventurism across Asia.

"As partners in this Quad, it is more critical now than ever that we collaborate to protect our people and partners from the CCP’s (Chinese Communist Party) exploitation, corruption, and coercion. We’ve seen it in the South, in East China Sea, the Mekong, the Himalayas, the Taiwan Straits. These are just a few examples.’’

Pompeo went on blame China for trying to initially mislead the world on the damaging potentials of the virus. With Trump’s handling of the pandemic coming in for heavy criticism and affecting his poll prospects, Trump is continually pointing his fingers at China’s irresponsible behaviour. He always refers to it as the China virus. He and his wife have both tested positive and are under treatment.

"When we met, now last year, the landscape was very different. We couldn’t have imagined the pandemic that came from Wuhan. That crisis was made infinitely worse by the Chinese Communist Party’s coverup. The regime’s authoritarian nature led its leaders to lock up and silence the very brave Chinese citizens who were raising the alarm,” Pompeo said and added :

"America stands with each of you as we work to achieve victory over this horrible pandemic and rebuild our economies together, and I’m looking forward to that part of our conversation today."