Why India Is Not A Favourite Tourist Destination For Affluent Chinese

Lack of good civic amenities in tourist hotspots and insufficient Mandarin guides are among many challenges in attracting Chinese tourists to India. 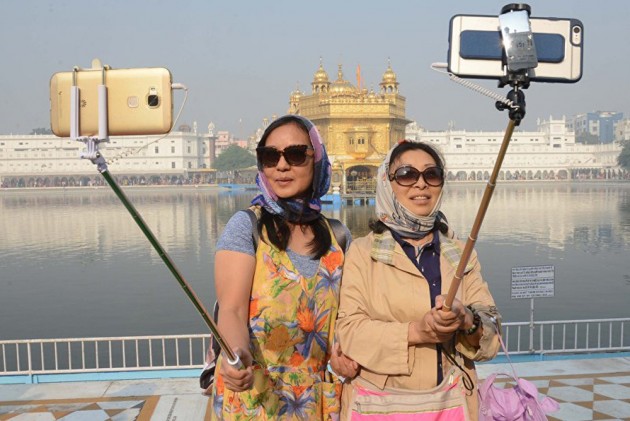 India shares maximum border area with China after Bangladesh. Ironically while Bangladeshi nationals top the list of foreign tourists in India, Chinese nationals figure much below.

A recent report by a High-Level Advisory Group (HLAG) on Trade Policy, constituted by the previous Narendra Modi government, has acknowledged the importance of Chinese tourists to increase tourism exports in India.

Chaired by a renowned economist, Dr Surjit S Bhalla, the group reiterates that India should attract more Chinese tourists as globally they are among the top spenders.

Comprising 22 experts including Subramanian Jaishankar, who is currently the Minister of External Affairs, the report was presented to the Ministry of Commerce and Industry on May 22, just a day before the results of the Lok Sabha elections were announced.

However, people who are conversant with the issue say that there is nothing new in the recommendations of this report.

“The National Committee on Tourism had made similar recommendations basis a report brought out in 1988. But after that the successive governments have executed nothing,” said a senior official from the Tourism Ministry maintaining that the HLAG recommendations are now under the purview (in terms of implementation) of the infrastructure division of the Ministry of Finance and NITI Aayog.

Data on inbound foreign tourists to India shows that China ranked 13th in 2014. It rose to the 8th position in 2017. Though this is a considerable increase, industry experts say that India-bound Chinese tourists belong to the middle class and lower middle class. This, in turn, translates to a poorer spending capacity. High-end Chinese tourists prefer Western countries.

“Chinese tourists find our tourist destinations extremely unhygienic and filthy. They feel ill at ease in terms of basic amenities such as toilets, parking space and even streets and lanes,” said Arun Anand from Midtown Travels Pvt Ltd, a tour operator that has been organising trips for Chinese tourists for the last 30 years.

Anand says that a small percentage of high-end Chinese tourists who come to India love to stay in luxury hotels such as The Oberoi Udaivilas of Udaipur or the Taj Mahal Palace Hotel in New Delhi.

“They take a guide who is at their disposal all the time. They don’t want to hop from one destination to another. They visit one or two places during the day and enjoy the rest of the time in the hotel,” he added.

“India’s biggest tourist attraction is the internationally-acclaimed monument Taj Mahal in Agra. But the sad fact remains that there are no clean toilets around this iconic monument,” rued a tourism officer.

“If this is the state of affairs of our best monument, you can well imagine how deplorable the civic amenities will be around other tourist hotspots,” he added.

Outlook spoke to a couple of Chinese tourist groups in Delhi to understand their experience and the majority of them said that before coming to India they had an impression that it is an unsafe country.

Xiao Haiying, a Chinese tourist who came with a group of 13, said that he found India safer than what he had heard about it in China.

The group was on a six-day tour to India to visit historical and tourist locations in Delhi, Jaipur and Agra. However, his group had a tough time getting immigration clearance because of the language barrier.

“We don’t know English and Immigration officials at the Delhi Airport are clueless about our language, which is Mandarin,” says Wang Hui, another tourist in the group.

Another group of Chinese tourists, who faced similar challenges despite being escorted by an interpreter, suggested that the Indian government should depute officials familiar with the Mandarin language at immigration points. They also complain about huge delays in getting immigration clearances of luggage.

Some tourists also complain that they get a visa for multiple entries to India but when they visit for the second or third time on the same visa, immigration officials grill them with too many unnecessary questions.

“A high-end tourist feels humiliated when he is unnecessary grilled at the immigration desk. He expects respect and good treatment. Such things spread through word of mouth and creates a negative image of the country,” observed Anand.

Chandan Kumar, who has been working as a guide and interpreter for Chinese tourists for the last seven years also says that it is difficult to find guides who are fluent in Mandarin.

There are only 37 authorised Mandarin guides in India who fall short in terms of catering to the 120,000 Chinese tourists every year.

“Actually a lot of guides who are well-equipped in Mandarin don’t have a license as they fail to fulfil the government criteria. Hence they work in an unauthorised manner,” said Anand.

Office bearers of organisations representing tour guides such as the Indian Tour Operators Association and Tourist Guide Federation of India admit that the shortage of Mandarin guides is a major obstacle in terms of attracting high-end Chinese tourists.

It takes a few years to learn Mandarin as it is a difficult language. Moreover, issuing licenses to the guides who work in an unauthorised manner is a challenging affair.

“The two ministries - the Ministry of Tourism and Ministry of Culture – have been fighting for two years to secure the authority of issuing licenses to the unauthorised segment,” says a tour guide requesting anonymity.

Earlier, the Ministry of Tourism used to issue licenses to guides. Later the Archaeological Survey of India (ASI) under the Ministry of Culture wanted to exercise this authority as historical monuments are under its jurisdiction. This matter is subjudice in the Delhi High Court.

Chinese tourists feel that India has great potential to attract tourists from China if the language is no longer a barrier.

“High-end tourists expect tour guides with a high standard of education who, besides speaking good mandarin, can understand their dialects too. A minor pronunciation can change the meaning of a sentence which they don’t feel good about,” said Rajeev Kohli from Creative Travels.

Experts are also of the view that India closed its tourism office in Beijing in 2014 as the government did not post any official there. At present, officials in the Embassy of India in Beijing take care of the promotional activities which are insufficient to create a buzz about Indian tourism in the Chinese market.

“Things like free e-visa and hassle-free immigration, among other positive measures, will create a buzz and target the high-end segment,” informs a tour operator. He and others in his fraternity feel that if the government grants a concession of $100 by waiving of the visa charges, the tourists are very likely to visit India and spend several thousand dollars. In other words, this waiver translates to business sense.

“The government’s approach on attracting Chinese tourists is very short-sighted. They want to make money from foreign tourists by imposing high fees at monuments without offering any amenities. They don’t realise how tourists can contribute to the country’s economy by spending money on shopping, hotels, cabs etc,” said Anand.

There is also a need to go beyond the straitjacketed tourist hotspots and showcase other destinations that highlight the heritage and culture of our country.

Anand cites the instance of Abhaneri, a village in the Dausa district of Rajasthan. It has a historic Chand Baori stepwell but seven years ago, it was completely nondescript. Anand and some other tour operators started taking Chinese tourists to Abhaneri to show them how India used to conserve water in older times.

Gradually, it became very popular and today most of the Chinese tourists want to go there. “They marvel at the fact that concerned Indian rulers were conscious about water conservation even in the 8th century,” he said.

“Now, the government has imposed an entry fee for foreigners. However, there is no improvement in amenities or the tourist infrastructure at the site,” added Anand.

Lack of discipline and maturity in dealing with foreign tourists also compounds the problems. On the other hand, some Chinese tourists feel unnecessarily hassled by hawkers and street sellers in India. They say that they almost feel like they are being stalked.

“They get on to our nerves and almost force us to buy their wares,” complains a Chinese tourist.

In a nutshell, it does seem that in terms of attracting high-end Chinese tourists, India has a long way to go.