The party accused the BJP of letting Masood off the hook again and also questioned Modi what was the use of 'swinging' with Xi. 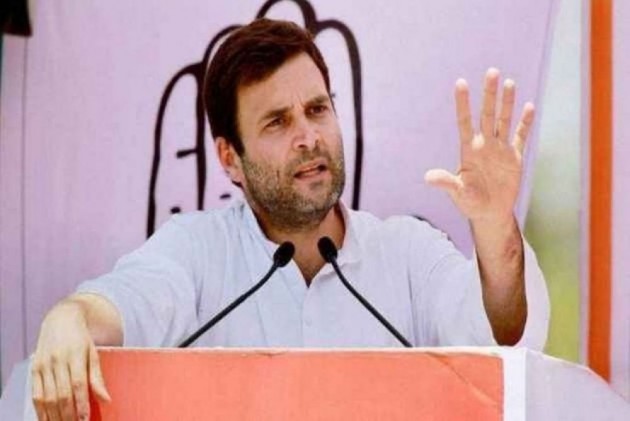 Congress president Rahul Gandhi on Thursday slammed Prime Minister Narendra Modi, saying that he was weak and scared of Chinese President Xi Jinping after China blocked a UN resolution to designate JeM chief as a global terrorist for the fourth time.

The Congress chief attacked the prime minister and said he had not spoken on China blocking the resolution in the UN Security Council.

The party accused the BJP of letting Masood off the hook again and also questioned Modi what was the use of "swinging" with Xi.

If Imran Khan Is So Generous, He Should Give Us Masood Azhar: Sushma Swaraj

'May Be Forced To Pursue Other Actions': UNSC Diplomat On Masood Azhar

"Weak Modi is scared of Xi. Not a word comes out of his mouth when China acts against India. NoMo's China diplomacy: 1. Swing with Xi in Gujarat. 2. Hug Xi in Delhi. 3. Bow to Xi in China," Gandhi said on Twitter.

India's bid to designate the Pakistan-based terror group Jaish-e-Mohammed's chief as a global terrorist suffered a setback with China on Wednesday putting a technical hold on a proposal to ban him following the Pulwama terror attack.

The proposal to designate Azhar under the 1267 Al Qaeda Sanctions Committee of the UNSC was moved by France, the UK and the US on February 27, days after a suicide bomber of the JeM killed 44 CRPF soldiers in Jammu and Kashmir's Pulwama, leading to a flare-up in tensions between India and Pakistan.

"With China having blocked our bid to designate Masood Azhar a global terrorist, the question on every Indian's mind is, what was the use of all the swinging with Modi and President Xi," the Congress said on its official Twitter handle.

"A terrorist responsible for such bloody murders is let off the hook again by the BJP," it claimed.

Congress' chief spokeserson Randeep Surjewala said it was a sad day in the global fight against terrorism.

"Sadly, Modiji's foreign policy has been a series of diplomatic disasters," the party spokesperson said.

The Congress has also been attacking the BJP over Azhar's release in the Kandahar hijacking case.

Gandhi has asked Modi to tell the nation that it was a BJP-led government which released Azhar from an Indian jail in 1999.

Gandhi has also alleged that National Security Adviser Ajit Doval, a top intelligence official back then, had "escorted" Azhar to Kandahar where he was handed over to terrorists.

Azhar and two other terrorists, Mushtaq Ahmed Zargar and Ahmed Omar Saeed Sheikh, were released from Indian prison in 1999 by the then BJP-led government headed by Atal Bihari Vajpayee in exchange for the passengers held hostage on board IC-814 flight hijacked to Kandahar in Afghanistan.