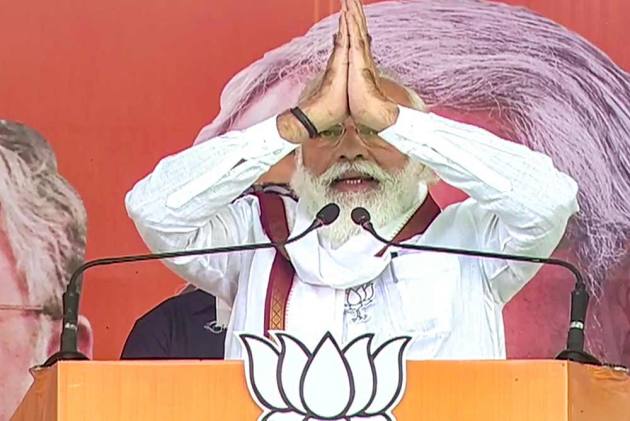 Prime Minister Narendra Modi will address four back-to-back rallies in Bihar on Sunday to garner support for the NDA candidates in the poll-bound state.

Modi will start his Sunday election tour with a rally in Chapra, the political bastion of RJD supremo Lalu Prasad.

According to the itinerary, from Chapra, he will go to Samastipur to address a public meeting in Housing Board ground, then at Gandhi maidan in Motihari, and will end the campaign trip with a rally in Bagaha.

According to sources in the JD(U) in Patna, Chief Minister Nitish Kumar will accompany Modi in Samastipur and Bagaha meetings.

Campaigning for the second phase will end on Sunday evening.

Among others, Raghopur, the Assembly constituency of theOpposition Grand Alliance chief ministerial candidate Tejashwi Yadav and Hasanpur in Samastipur from where his elder brother Tej Pratap Yadav is in the fray will go to vote in the second phase on November 3.

Modi will address a rally at Airport ground in Chapra, which has been the political "karmabhoomi" (place of work) of the jailed RJD president.

Prasad had taken a plunge into electoral politics with a win from Chapra Lok Sabha's seat in 1977 at an age of 29.

After firing "Jungle Raj ke Yuvraj" salvo at Tejashwi, it would be interesting to see what new he says about the RJD.

In the previous meetings, Modi also spoke on Ayodhya and Jammu & Kashmir.

At the Chapra poll meeting, NDA candidates of 25 constituencies of Saran, Siwan, and Gopalganj districts will be present on a separate dais erected near the one of the PM.

Additional district magistrate of Saran said that Covid-19 protocols would be followed strictly at the PM's rally.

A total of 25,000 chairs have been kept in the ground at a safe distance from each other besides nobody would be allowed inside the venue without a face mask, the ADM said.

Samastipur district magistrate Shashan Subhankar said that Covid-19 related restrictions would be abided by strictly in the Prime Minister's rally on Sunday.

This will be Modi's third election tour of Bihar.

He addressed rallies at Dehri, Gaya, and Bhagalpur on October 23 and came to the state again on October 28 to attend election meetings in Darbhanga, Muzaffarpur and Patna.