The Chief of Army Staff reviewed the overall security situation in the region with Northern Army Commander, Commander of the 14 Corps and other senior Army officials. 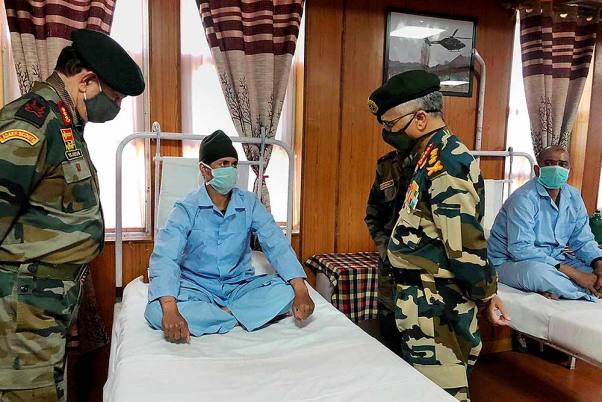 Army Chief Gen M M Naravane on Wednesday visited various forward areas in eastern Ladakh and took stock of the Army's combat preparedness in the region in the wake of the bitter border standoff with China, officials said.

Gen Naravane, who arrived in Leh on a two-day visit to the region, also awarded Commendation Cards to a number of soldiers who fought valiantly during the recent face-offs with Chinese Army in the region, people familiar with the matter said.

"General M M Naravane #COAS visited forward areas in Eastern #Ladakh and reviewed operational situation on the ground. #COAS commended the troops for their high morale and exhorted them to continue working with zeal and enthusiasm," the Army said in a tweet.

Soon after arriving in Leh, Gen Naravane visited an Army hospital where 18 soldiers injured in the clash in Galwan Valley on June 15 are undergoing treatment.

Twenty Indian Army personnel were killed and 18 were seriously injured in the violent clash with Chinese military in Galwan Valley.

When asked about conferring on "Commendation Cards" by Gen Naravane, an Army source said "whenever the Chief of the Army Staff visits formations or units, it is a norm to award on the spot Commendation Cards to personnel who exhibit exceptional devotion to duty."

"In the instant case also, personnel have been awarded for devotion to duty," the source said. It is learnt that soldiers who have been awarded the "Commendation Cards" fought valiantly in the Galwan Valley clash.

The Leh-based 14 Corps is tasked to take care of security situations along the Line of Actual Control in the Ladakh region.

In the meeting, the two sides arrived at a "mutual consensus" to "disengage" from all the friction points in eastern Ladakh.

The first round of the Lt Gen talks were held on June 6 during which both sides finalised an agreement to disengage gradually from all the standoff points beginning with Galwan Valley.

However, the situation along the border deteriorated following the Galwan Valley clashes on June 15 as the two sides significantly bolstered their deployments in most areas along the 3,500-km de-facto border.

On Sunday, the government gave the armed forces "full freedom" to give a "befitting" response to any Chinese misadventure along the LAC.

The Army has already sent thousands of additional troops to forward locations along the border in the last one week.

The IAF has also moved a sizeable number of its frontline Sukhoi 30 MKI, Jaguar, Mirage 2000 aircraft and Apache attack helicopters to several key air bases including Leh and Srinagar following the clashes.

The situation in eastern Ladakh deteriorated after around 250 Chinese and Indian soldiers were engaged in a violent face-off on May 5 and 6. The incident in Pangong Tso was followed by a similar incident in north Sikkim on May 9.

Prior to the clashes, both sides had been asserting that pending the final resolution of the boundary issue, it was necessary to maintain peace and tranquillity in the border areas.

'Coronavirus Is Not The Only Rising Curve': Rahul Takes Swipe At Govt Over Rising Fuel Prices