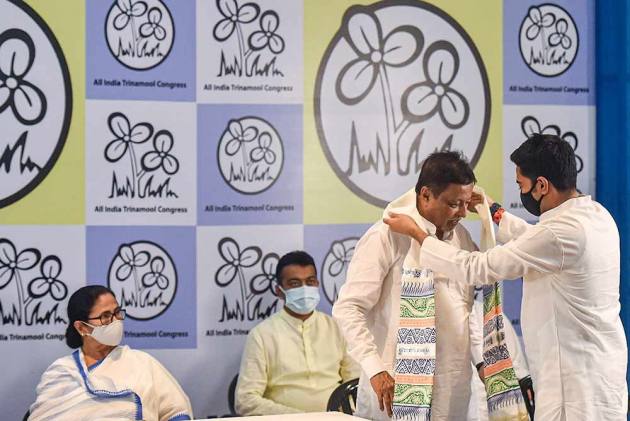 The BJP’s national vice-president Mukul Roy received a grand welcome in the Trinamool Congress (TMC) on Friday, 43 months after he left the party and joined the BJP. Chief Minister Mamata Banerjee welcomed him to the party in the presence of the all-India general secretary Abhishek Banerjee and secretary-general Partha Chatterjee, among others.

After the welcome, Banerjee told the media, “He is one of our own. Today, he has returned. They coaxed and threatened Mukul citing agencies to join the BJP. But he was not feeling well. He was in mental trouble and I could see he was getting ill. I think Mukul will get mental peace after this.” She also said, “Old is always gold.”

Abhishek Banerjee, the chief minister’s nephew who is considered her heir-apparent, formally welcomed Mukul Roy, putting a scarf around his neck, following which they hugged each other.

Earlier, it had been widely speculated in the Bengali media that Abhishek’s rise through the party ranks since 2014 caused the rift between Roy and the party chief. However, Mamata Banerjee ruled out any such rift on Friday as “media speculations.”

While explaining the reason behind taking him back, the TMC supremo said, “Mukul did not say a word against us during the election campaign. Those who ditched the party ahead of the elections would not be taken back. We will consider the case of those who went to the BJP following Mukul. But we will not take back the traitors who played a dirty role ahead of the elections,” said Mamata Banerjee.

“We will welcome those who were gentle, sober and did not cause bitterness,” she said, adding that more leaders were going to return to the TMC from the BJP. “The situation in Bengal is such that no one will stay in the BJP. They torture (those in the party),” she said.

Roy described Banerjee as “a leader of Bengal and a leader of the nation” and said, “It feels great to see all the old people of my life. This exit from the BJP and return to the old people makes me feel relieved.”

His son, Subhranshu, also returned to the party along with him.

The BJP’s state unit president Dilip Ghosh responded to the development saying that the party gained nothing from Roy and therefore feared no loss.