The prevailing situation in Assam marred new year celebrations as well. Even hotels and clubs had to cut down their midnight celebrations in Guwahati. 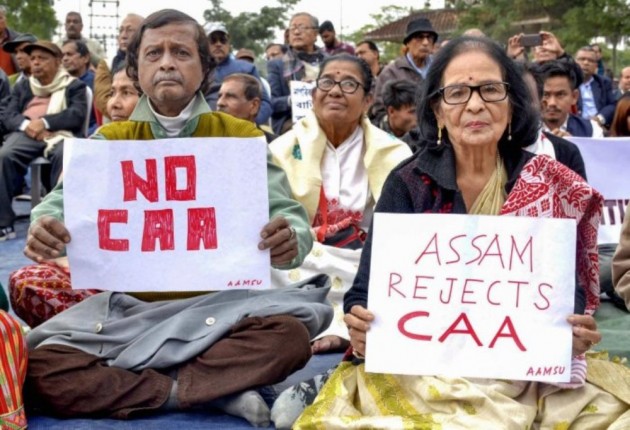 The protests against the Citizenship Amendment Act (CAA) continued unabated on Wednesday, the first day of 2020, in Assam, with students of Cotton University in Guwahati staging a sit-in.

“This is not the time to celebrate. We are in a crisis and we are here to express our opposition to the CAA, which is against the indigenous people of the state and the northeast. We will continue to oppose until the act is repealed,” said a student.

In Guwahati Club rotary, people from different walks of life gathered to demonstrate against the newly amended law that has triggered Opposition across India.

“We are having a tough time. We are facing a crisis for our identity and motherland. We want to clarify this fight is not against any religion or Bengalis. This is to protect our identity. I pray for a peaceful 2020 without the CAA,” said popular Assamese actress Barasha Rani Bishoya taking part in the protest.

Similarly, several protest rallies were taken out across the state.

The prevailing situation in Assam marred new year celebrations as well. Even hotels and clubs had to cut down their midnight celebrations in Guwahati.

The picnic spots, normally packed on the first day of the year and during the season, were also empty.

“Here, on the new year day, we usually have over a hundred buses with the revellers for picnic and fun. But today, we don't even have 10 vehicles. It indicates the situation of the state. We all oppose the CAA. I hope the government pays heed to the demand of the public,” said Himangshu Barman, a local near Deepor Beel in the outskirts of Guwahati, where people gather for picnics.

Mumbai-based Assamese actor, supermodel and entrepreneur Dipannita Sharma said she was hopeful of winning the current battle in 2020.

“After the current turmoil, I hope 2020 brings peace to Assam and we win the battle, which we are so obviously fighting. I pray the rest of the country sees the Assamese point of view, empathises with us, understands our struggles and why our fight is just a little different from the rest of the country. I hope we can stand together in these trying times, as Assamese Indians, for Assam, for NE, for India,” Sharma told Outlook.

The CAA, which endorses citizenship to non-Muslim migrants from the neighbouring countries, has been vehemently opposed in the region, already plagued by the infiltration.

Though the opposition to the CAA in the rest of the country is due to the exclusion of Muslims and Tamils, in Assam and NE states, people oppose the new law, for the fear that they would lose their culture, language and identity if migrants from Bangladesh were given citizenship.

Most of the organizations in Assam accept the cut-off year of 1971 as per Assam Accords, but the CAA’s cut off year is 2014.