Nivar would intensify into a very severe cyclonic storm and it is likely to cross the coast between Tamil Nadu and Puducherry before dawn: IMD 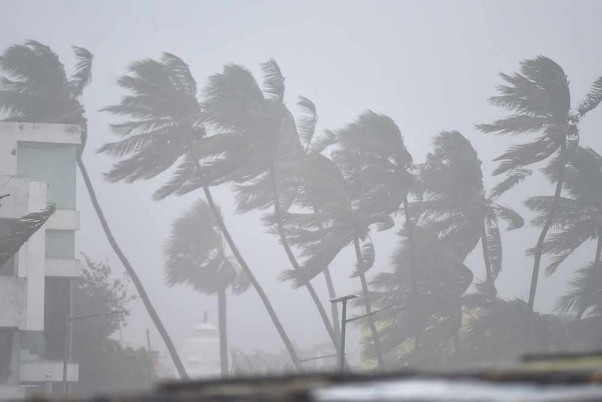 Gusty winds and rains lashed parts of Tamil Nadu on Wednesday leaving several areas inundated and authorities have housed over one lakh people in shelters as severe cyclone 'Nivar' hurtled towards the coast. Chennai airport authorities said Aircraft operations at the airport will remain suspended from 7pm of November 25 till 7am of November 26.The decision was taken considering the safety aspect of passengers and the severity of the approaching cyclone, they said.

Naval ships, aircraft and rescue teams have been alerted and are kept on standby.

'Nivar would intensify into a very severe cyclonic storm and it is likely to cross the coast between Tamil Nadu and Puducherry before dawn on Thursday, the India Meteorological Department said.

With rains drenching parts of the state, authorities have evacuated over one lakh people and housed them in shelters besides disconnecting power supply in vulnerable areas as a precautionary measure.

While Chief Minister K Palaniswami declared Thursday a public holiday for 13 districts, a government order included three more districts considering the safety of people in view of the cyclone.

Revenue Minister R B Udhayakumar said 1,03,291 people including children have been housed in 1,000 relief centres. Food, water and all other essentials including masks to help prevent coronavirus have been made available to them in the relief centres, he said.

A senior official said subsequently, the number has increased to 1,21,152.

According to the government, these people have been housed in shelters at Ariyalur, Chengelpet, Chennai, Cuddalore, Nagapattinam, Perambalur, Ranipet, Thanjavur, Tiruvannamalai, Tiruvarur, and Villupuram districts.

As a precautionary measure, electricity distribution was stopped to consumers in several regions falling under such districts and especially areas that have overhead power transmission lines witnessed power cut since noon.

Police personnel placed barricades in arterial roads and important intersections in coastal districts to bar movement of vehicles and the government appealed to the people to stay indoors.

The Chennai Metro Rail, which operated minimum services, said operations would end by 8 pm and services would resume tomorrow depending on the weather.

In its latest bulletin, the IMD said Nivar would cross over betwen Karaikal and Mamallapuram "during the midnight of November 25 and early hours of 26 November."

The storm, 250 km off Chennai and 190 km and 180 km from Puducherry and Cuddalore respectively, is very likely to move northwestwards and cross coasts as a "very severe cyclonic storm with a wind speed of 120-130 kmph gusting to 145 kmph."

Under the influence of the cyclone, coastal and north interior Tamil Nadu, Puducherry and Kariakal regions are likely to receive rainfall at most places with heavy to very heavy showers at a few places and extremely heavy rains at isolated places.

Rainfall is expected to continue in many places in these regions on Thursday too with heavy rainfall at some places.

Surplus water was released from Chembarambakkam lake, one of the key drinking water sources to the city, since it almost neared its full level, the government said.

PWD officials said 1000 cusecs was released from the lake as the level stood at 22 feet of the total 24 feet.

Chennai and its suburbs, which received heavy overnight rains, continued to witness intermittent showers coupled with strong winds with low-lying areas getting inundated and water entering houses in such localities.